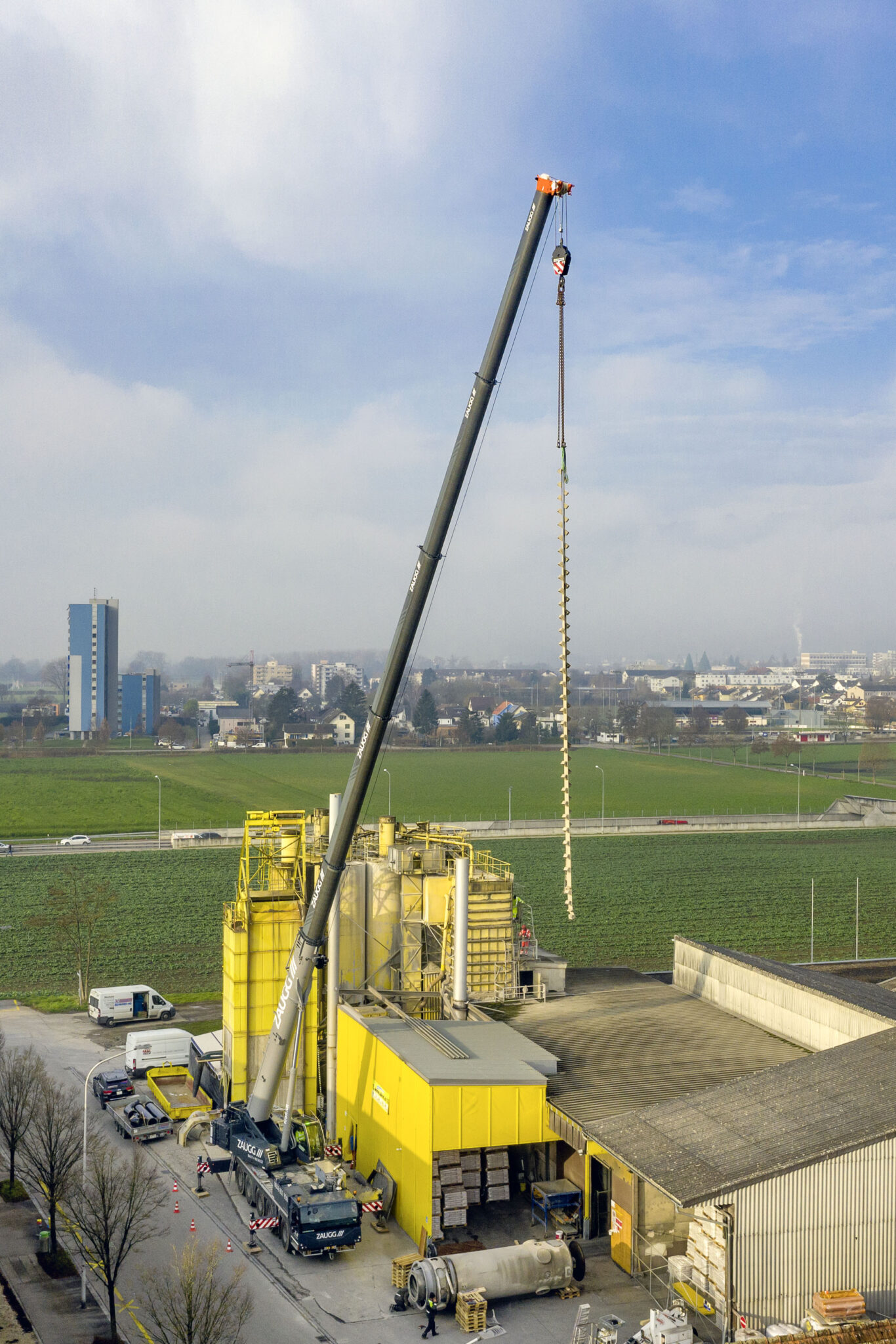 A new Liebherr LTM 1110-5.1 mobile crane was in action in Switzerland, replacing system components at a dry concrete production plant. The machine operated by Zaugg AG Rohrbach based in the Canton of Berne was one of the first of its kind to be delivered to customers. Zaugg uses the new mobile crane for a range of tasks including erecting construction cranes thanks to its 60 metre telescopic boom.

A few months ago, the fleet of Swiss contractor Zaugg AG Rohrbach received an addition – a Liebherr LTM 1110-5.1 mobile crane. “We use the new crane for all sorts of jobs”, says Christian Geissmann, Crane Logistics Manager at Zaugg. “From moving large oil tanks and machine relocations to structural steelwork, the LTM 1110-5.1 does almost everything we need. We even use the crane to erect small construction cranes. It really is an all-rounder.”

During the crane job at the concrete plant, crane driver Christian Kaufmann was on a construction site with the LTM 1110-5.1 for the first time. Normally the young crane operator is in charge of a crane from another manufacturer. To complete the hoists at the dry concrete production plant, Kaufmann had to position the new crane right by the side of the road. However, there was not enough space available to set up his crane with the outriggers fully extended. He therefore extended the outriggers to 56 and 62 percent against the traffic. This was the only way he could operate with the supports fully extended on the load side. “My other three year old crane also has a variable support base, but it is restricted to the defined pinning positions. VarioBase® is something else.” 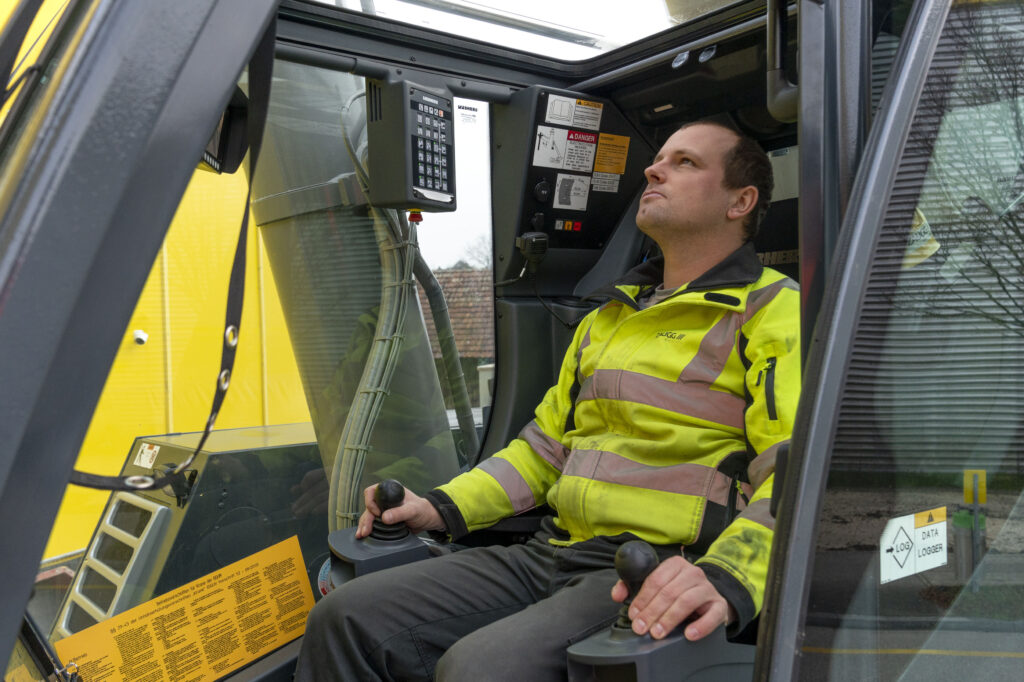 Full concentration – enjoying using the new machine for its first crane job – crane operator Christian Kaufmann in the cab of the Liebherr LTM 1110-5.1.

At 60 metres in length, the Liebherr LTM 1110-5.1 has one of the longest telescopic booms of any mobile crane in its lifting class. The powerful and agile 5-axle crane is virtually predestined for the assembly of smaller tower cranes. Thanks to its compact dimensions and features such as VarioBase®, the mobile crane is also perfectly suited for work in narrow city centres. The new LTM 1110-5.1 from Zaugg has already been able to demonstrate its strengths in a narrow alley in the old town of Solothurn, Switzerland, when dismantling a Liebherr tower crane.

Zaugg AG Rohrbach was originally founded in 1936 as a small family-run business, with the third generation now at the helm. It has a workforce of over 130 people working in construction, joinery and carpentry, in its crane logistics, heavy and special haulage divisions and also in industrial relocation services. In addition to forklift trucks and lifting platforms, Zaugg has a fleet of 16 mobile and mobile construction cranes. A Liebherr LTM 1450-8.1 is the most powerful machine in its modern fleet, all of which,  with one exception, were manufactured by Liebherr. 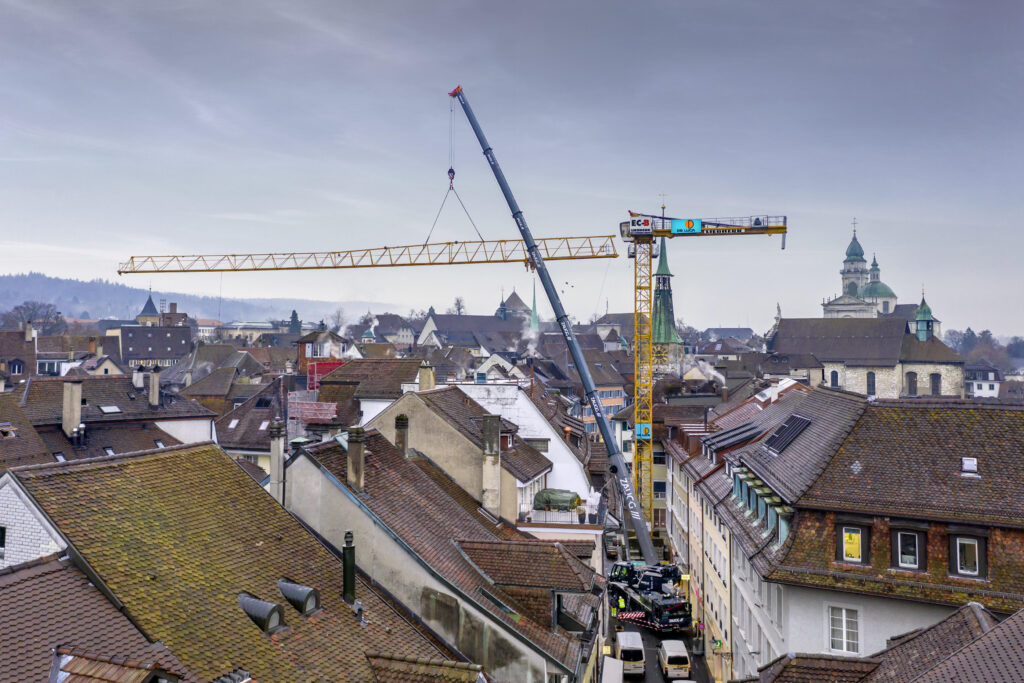 Seems to be stuck – the LTM 1110-5.1 from Zaugg, who is dismantling a Liebherr construction crane in a narrow alley in the old town of Solothurn, Switzerland. 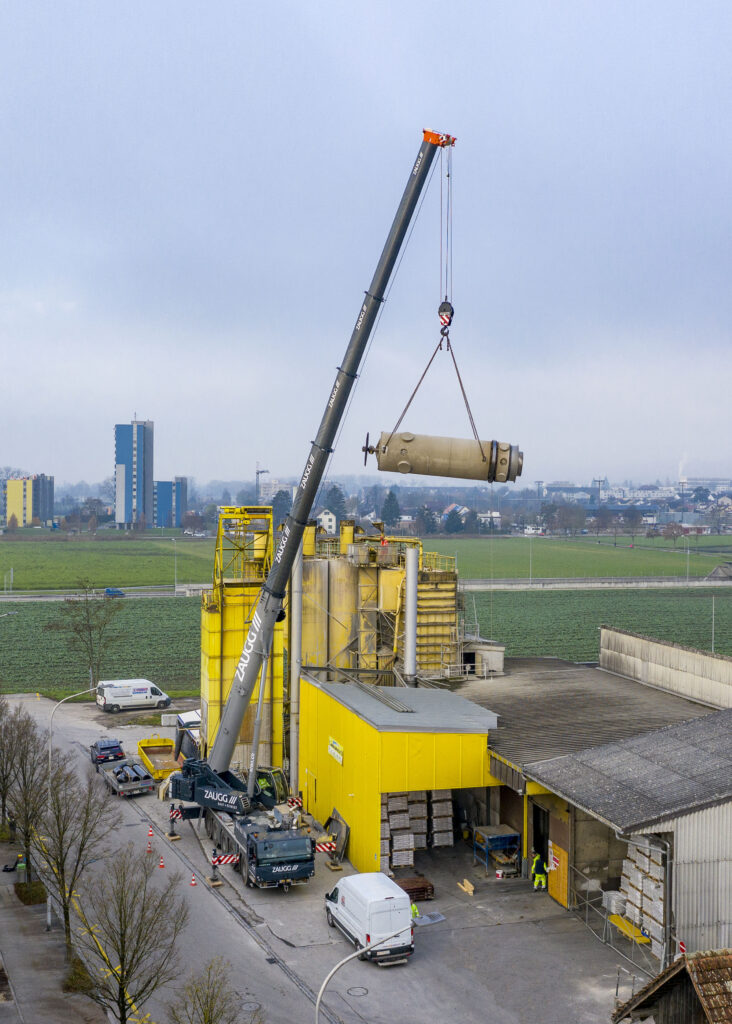 Removed – The 12 tonne dry drum from the dry concrete production plant the suspended on the hook of the LTM 1110-5.1.