Staffordshire-based specialist shipping company Robert Wynn and Sons Ltd. have provided the final chapter of an amazing story that forms a part of the UK’s wartime maritime history.

Built in Southampton in 1941, RML 497 is a Fairmile B Coastal Forces vessel which saw service throughout the Second World War. RML 497 rescued downed RAF pilots from the North Sea, trained Commando soldiers in the South West, and conducted a Commando raid on the Channel Islands.

After the war RML 497 was decommissioned and became a passenger ferry along with other Fairmile B vessels out of Brixham Harbour. Renamed Western Lady III, the vessel continued to be used for passenger service right up until 2015.

Due to fears about the integrity of the 78-year-old vessel Robert Wynn & Sons semi- submersible vessel Terra Marique was deemed to be the apposite vessel for the project. A project that required the historic motor launch to be carefully towed, her first movement in three years, from her mooring on the River Itchen to the Port of Southampton where a bespoke cradle had been assembled and loaded on to the awaiting Terra Marique.

The 400 miles sea passage up the UK’s east coast from Southampton to Hartlepool was completed in four days. Upon arrival the 81-tonne vessel and 45-tonne cradle were “jacked up” using a special 16-point jacking system and transferred on to ALE’s self-propelled trailer and rolled off the Terra Marique ahead of her 1.5mile journey by road to her final resting place at NMRN Hartlepool.

Subject to a conservation plan, it is here that RML 497 will sit alongside other significant historic ships including 19th century frigate HMS Trincomalee .

Robert Wynn & Sons Project Manager Group Engineer, Sally Weston was keen to highlight that “…this was a great team effort, where all involved worked tirelessly to ensure the historic and precious cargo safely reached its final destination. Not without its challenges the Wynn’s team and our partners planned all aspects of the journey meticulously and executed that plan perfectly. It’s been a privilege to be involved with The National Museum for the Royal Navy’s restoration plans and play a small but significant part in Rescue Motor Launch 497’s long and distinguished history.”

Roll out in Hartlepool 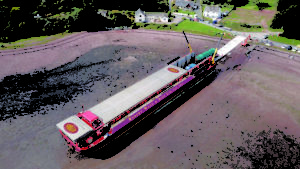 the Terra Marique beached on another cargo operation