Two sites from a single location – whilst preparing explosives to demolish a coal-fired power station in Lünen, North Rhine-Westphalia, the Liebherr mobile crane was working on another site at the same time due to high time pressure. Fitted with a luffing lattice jib with a maximum length of 91m, the new LTM 1650-8.1 from Bergheim-based crane contractor Wasel GmbH had to hoist explosives experts up to a platform on the chimney of the decommissioned power plant at a height of 140m. Façade components on the boilerhouse also had to be removed at the same time using radii of up to 80m.

For crane operator Michael Müllers, this job with his new Liebherr crane was not exactly a comfortable one. The experienced crane operator in the cab of the LTM 1650-8.1 had to work on two sites at the same time for this demolition project. At the foot of the 250m chimney at the former coal-fired power plant, the crane was responsible for hoisting the explosives crew together with their drilling gear and explosives up to a work platform on the flue at a height of around 140m. Once there, they placed around 30kgs of explosives in 140 boreholes. As a result of its enormous height, the giant chimney could not simply be demolished by placing explosives at its base, and instead it had to be demolished using a single-folding method.

The Liebherr crane had a total of 145t of slewing platform ballast to enable it to support the demolition work on the façade of the neighbouring building from the same location. Using its 91m luffing lattice jib, it was able to reach even the furthest points to help dismantle the façade. A large platform which held a team of workers and the salvaged material was hoisted in full over the neighbouring 70m high building. The platform was then used on the other side of the building at radii of up to 80m. The safety cage, personnel and demolition material created a gross load case of around 8t for the powerful mobile crane with its impressively long luffing jib. To manage this large radius, Michael Müllers set the radius of the slewing platform ballast to the maximum value of 8.4m. For working on the chimney with radii of around 45m, the ballast distance simply had to be reduced to 6.4m using the hydraulic slewing mechanism.

A hydraulic unit was also on the site in the immediate vicinity of the crane in case of emergency. When working with safety cages and work platforms on the crane hook, a unit of this type is mandatory so that if the crane engine suffers a failure, the safety cage can be lowered safely at any time. However, it was not needed on the former power plant site. The crane, which, in fact, also has an integral emergency take down system of its own, functioned perfectly throughout the job which lasted several weeks.

After around six months in the operator’s cab of the LTM 1650-8.1, crane operator Michael Müllers is extremely satisfied with his new machine. Wasel GmbH is based in Bergheim near the River Rhine and, in addition to crane work, also provides heavy logistics, tower cranes and industrial assembly services. To date, the company has mainly used its new crane in refineries, for handling heavy goods and for jobs in industry. “The crane’s handling is really good, particularly setting it up,” says a delighted Müllers about the ease of use of the modern mobile crane. “And as far as lifting capacities are concerned, it represents a real quantum leap forwards. It’s a fantastic machine.” 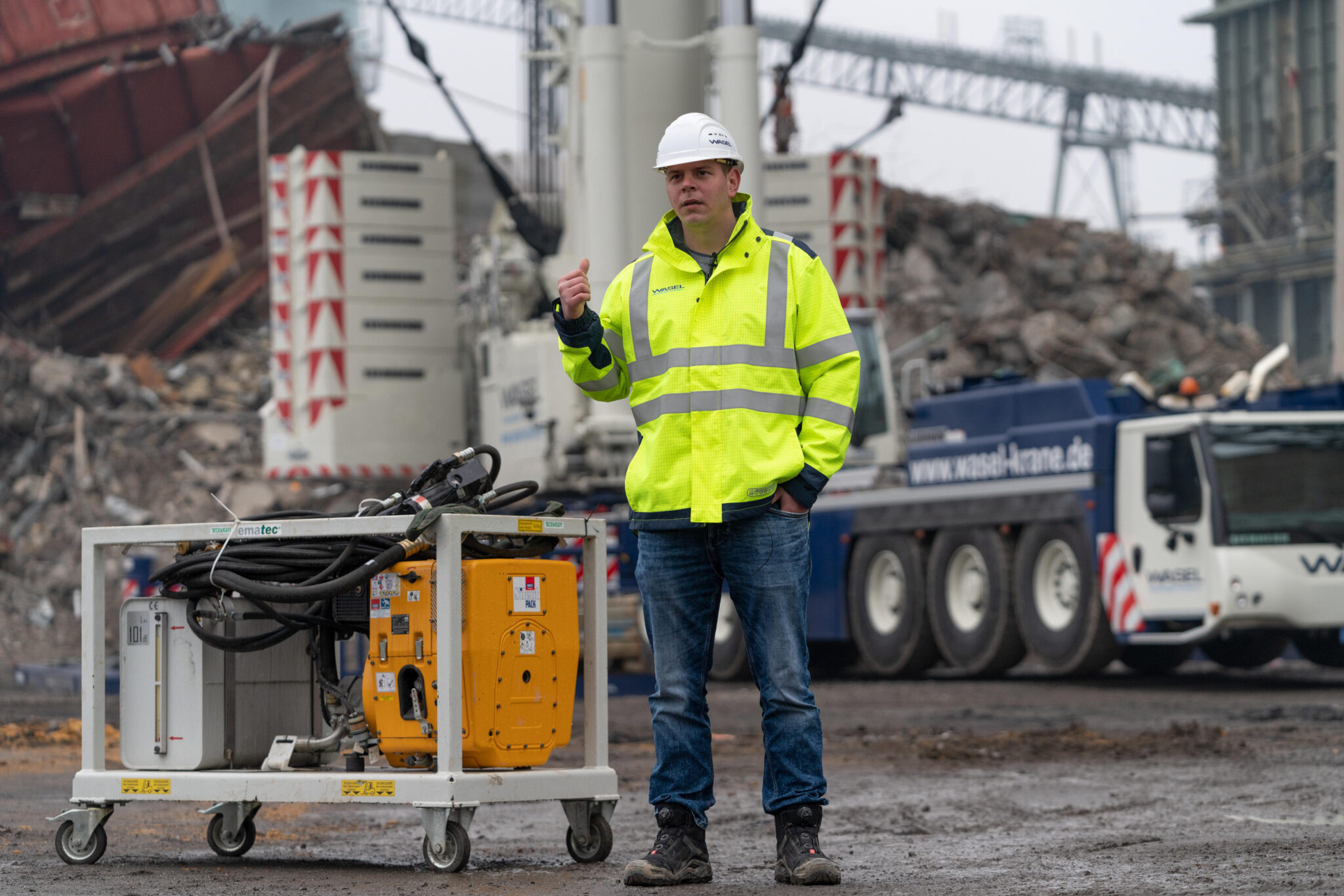 In case of emergency – Project Manager Maurizio Ising explains how the hydraulic unit works to enable the safety cage on the crane’s hook to be lowered at any time if the crane’s engine suffers a failure. 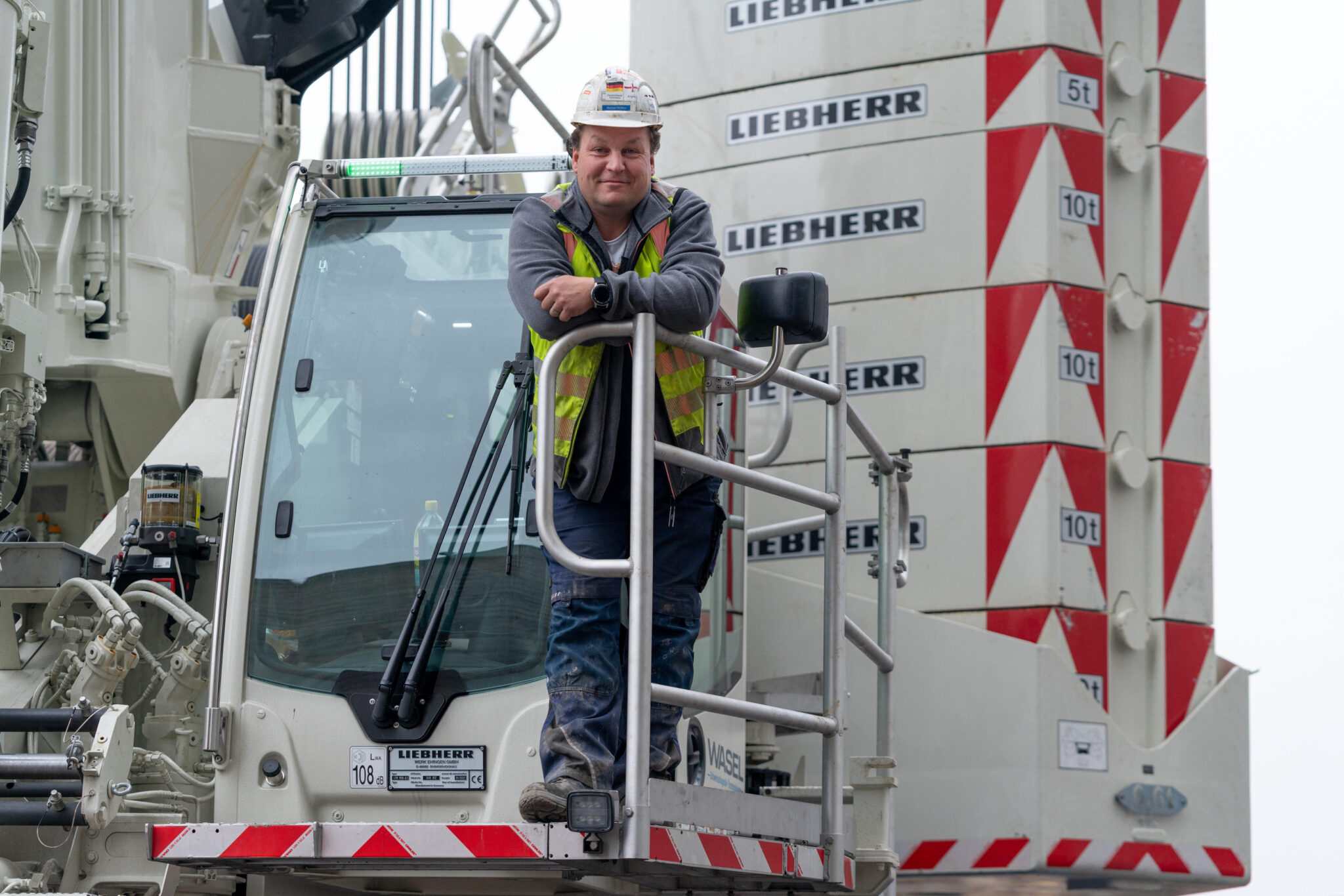 “Really good” – Wasel’s crane operator Michael Müllers is extremely satisfied with the handling and set-up times of the new crane. But he saves his main praise for the lifting capacity values of the Liebherr LTM 1650-8.1. 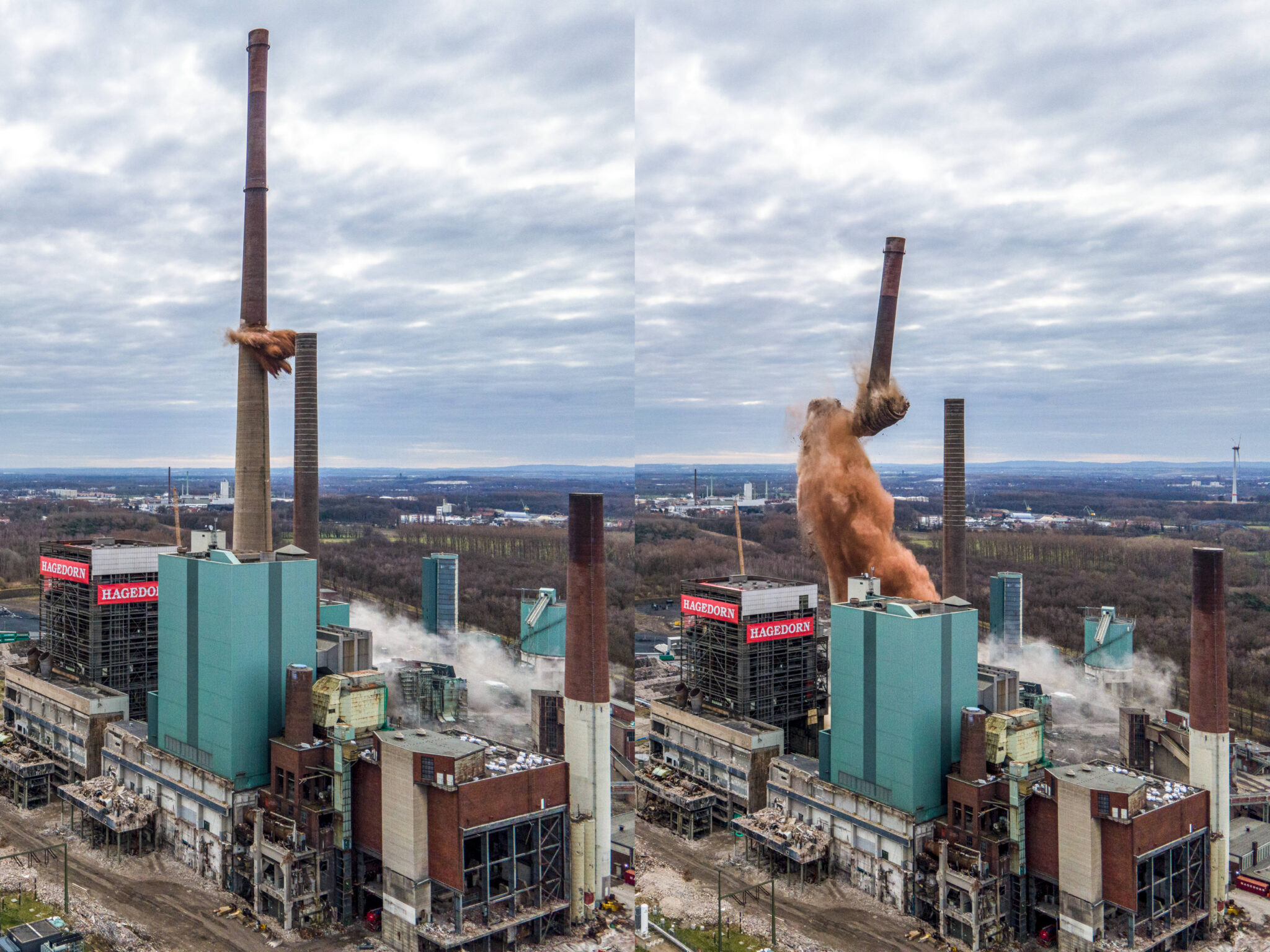 Detonation + 1  and Detonation +2              The end of a giant chimney – the flue on the former lignite power station in Lünen was 250 metres high. This imposing landmark in the Ruhr region has recently vanished. (Photograph: Hagedorn Management GmbH)

Dizzying height – secured with fall arrest equipment, the explosives experts climb onto their platform at a height of 140 metres.