The Bielefeld branch of the Federal Agency for Technical Relief (THW) has hoisted a 46t temporary prefabricated bridge over the River Erft using an LTM 1650-8.1. It will replace the bridge that was destroyed and washed away by the severe flooding in summer 2021. It means that car drivers and pedestrians in the south-west of the district capital will once again be able to cross the River Erft. The temporary bridge has sufficient capacity to carry vehicles weighing up to 30t. It is an important signal for the local population to show that restoration work is progressing and is due to remainFlood Disat in place for around one year until the brand new Erft bridge is ready for installation.

In the Euskirchen disaster zone, the severe flooding in 2021 resulted in the bridge over the River Erft being destroyed and washed away by the sheer volume of water. THW Bielefeld has provided a solution in the Euskirchen suburb of Roitzheim in the form of a prefabricated temporary bridge. The temporary bridge was built by the THW and then assembled on site using an LTM 1050-3.1. The bridge, weighing 46t and measuring 22m long and 7m wide was then hoisted over the River Erft by an LTM 1650-8.1. The THW had engaged Cologne crane and heavy haulage contractor Wasel GmbH to complete this work. 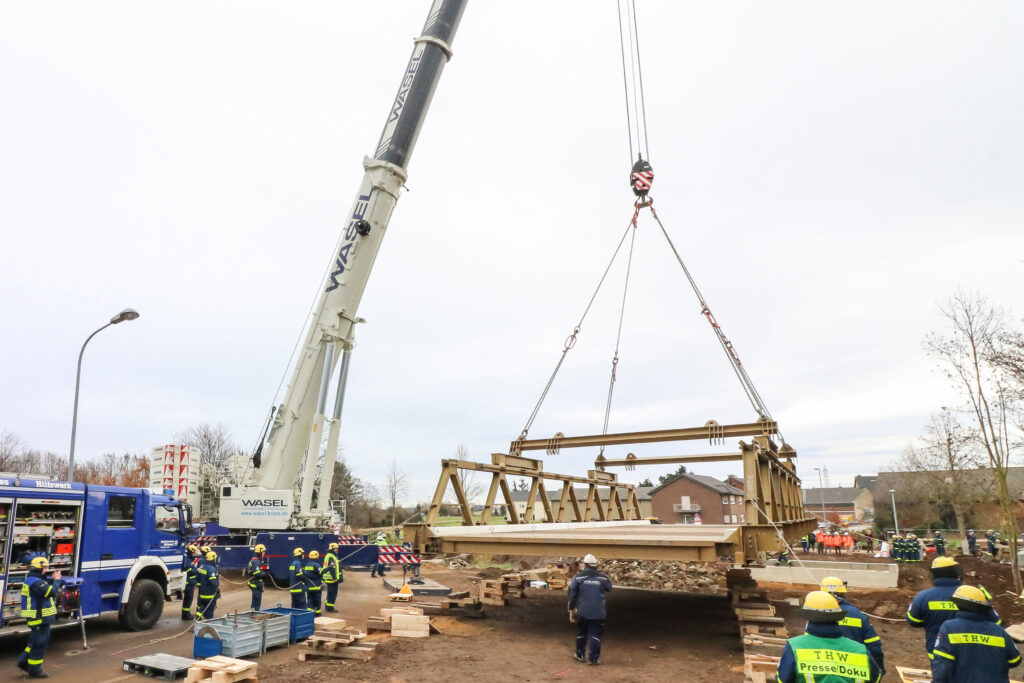 To hoist the bridge, THW Bielefeld engaged Wasel GmbH, which used an LTM 1650-8.1 for the project.

The crane was set up with 135t of ballast with a ballast radius of 8.4m. The radius for hoisting the bridge into position, which weighed 50t, including the hook and fastening equipment, was 27m. Positioned on a concrete foundation, the bridge contains 1260 screw connections, which gives it sufficient capacity to carry vehicles weighing up to 30t. It will therefore be an important feature for the local population, enabling them to cross the River Erft in the south-west of the district capital. Julian Schmidt, Technical Director at Wasel, takes up the story: “The restoration work in the affected areas is proceeding at full speed and we are delighted that we can provide some assistance in these situations. It’s also wonderful to see how many people are doing such good work every day to get a little bit of normality back to the affected areas as quickly as possible.”

Mayor Sascha Reichelt describes the temporary bridge as a major signal for the people of Euskirchen. It is a symbol of reconstruction and shows that life goes on. The temporary bridge is currently scheduled to remain in place for around one year until the new bridge is ready. The new construction presents a challenge, however, as the gas, water and telecommunications lines were all carried in the old bridge and will also have to be rerouted. THW Bielefeld is one of just 16 local THW organisations which has a specialist “bridge building” group and was already in action in the Ahrweiler district, which was also badly affected by the flood. “This is a special moment for me. I have never done anything like this before,” says an impressed THW Team Leader, Burkhard Aehlich.

THW Bielefeld hoists a 46t temporary bridge with the help of the LTM 1650-8.1 over the River Erft in the Euskirchen disaster zone. It will be a massive help to the people there and represents a major step forward in the reconstruction efforts.

LR 1300 SX – the Next Generation from Liebherr