Alongside Walsh Construction, Mammoet recently executed lifts for the historic Merchants Bridge rehabilitation project in St. Louis, Missouri. Together, Walsh and Mammoet have rebuilt the bridge by removing and replacing all three of the bridge’s trusses as well as the east approach connecting St. Louis, Missouri and Venice, Illinois. Originally built in 1889, the rail bridge crossing is the oldest rail structure spanning the Mississippi River. 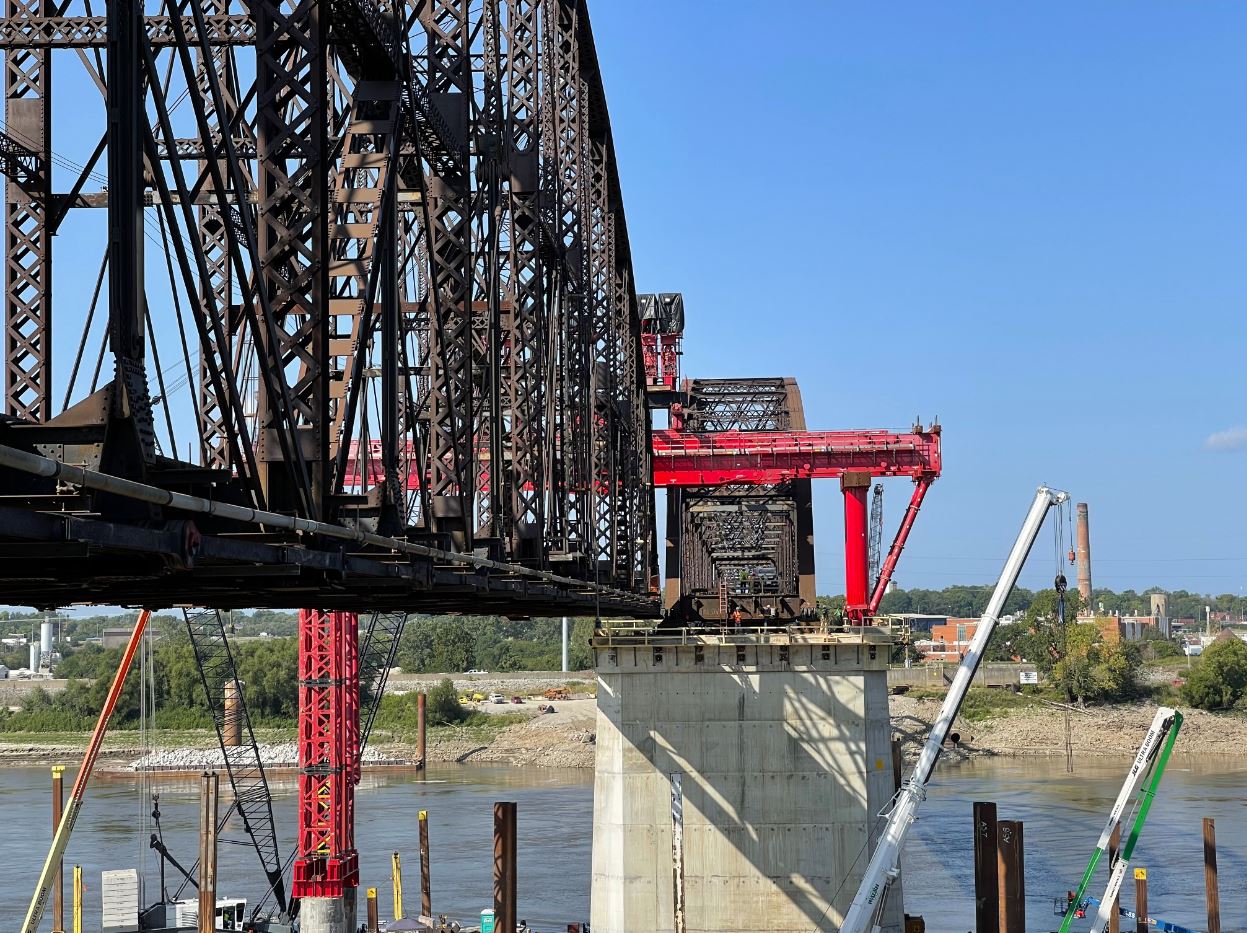 Mammoet’s technical solution entailed two large gantry systems assembled over the Mississippi River. Each new truss measured 158m (520 ft) in length and weighed 4,082t (9,000,000 lbs.), whereas each of the existing trusses weighed less than half as much at 1,796t (3,959,502 lbs.) Each of the newly constructed trusses were floated by barge into position, raised, and placed.

Mammoet’s global coverage allowed it to import the right tools for the job easily – a few large beams from its fleet were shipped to the States from Singapore and the Netherlands. The beams were then reinforced to be able to resist the weight of the hefty load. Each gantry was equipped with a skid system on the gantry beam; thus, the bridge section could be picked up from the lift location and skidded to the installation position. The only difference between the two gantry setups was the type of gantry beams utilized, resulting in a slightly different skid setup on top. 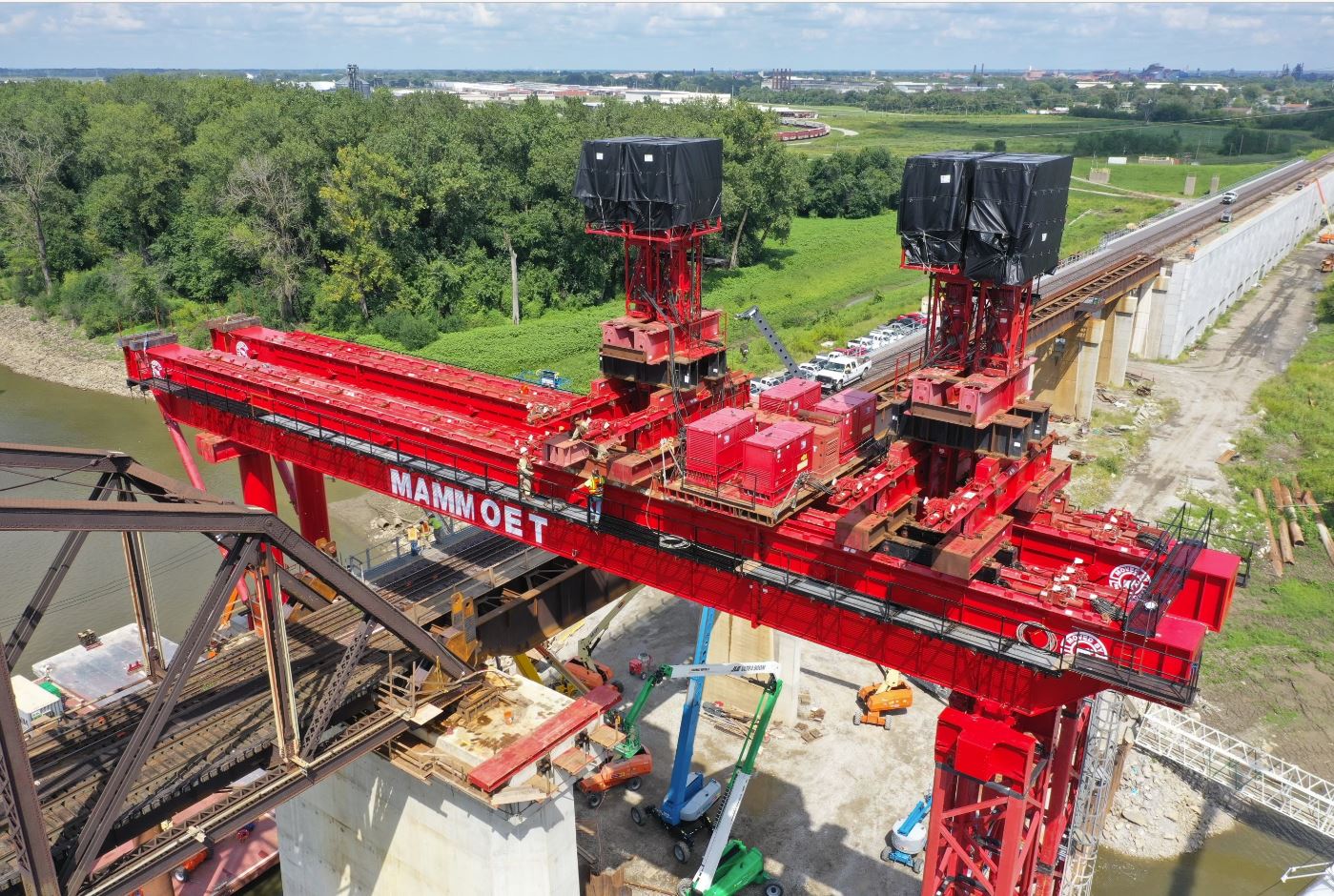 View of gantry setup from above

The bridges were lifted utilizing the original beaming locations using 4,900t strand jacks for the old bridge and 8-900t strand jacks for the new bridges. They were connected to the customer-supplied lifting lug and lifted into place, skid over, and either lowered onto awaiting deck barges or lifted and skid onto the permanent bearing pads. The beams, depending on the type, weighed 135t and 160t. Walsh and Mammoet worked together for over a month to install both systems to make the lifts of the first span. Thereafter, the gantry systems were moved over to the other piers and reassembled to allow spans two and three to be lowered and reinstalled. 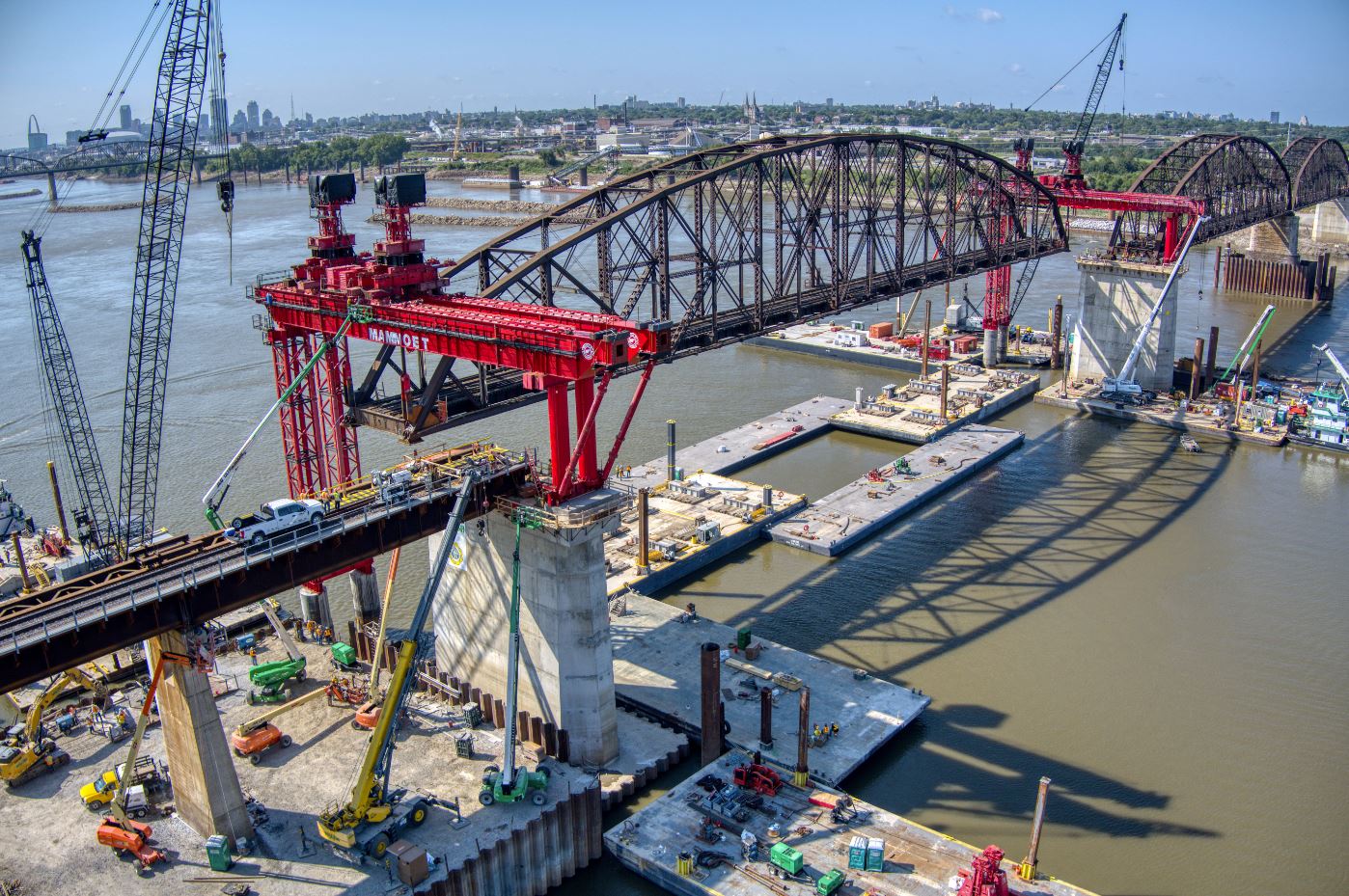 The rehabilitation project will minimize necessary bridge maintenance in the future, restore rail service to both tracks across the bridge as well as forever changing St. Louis’ 132-year-old skyline. Mammoet has extensive knowledge and expertise relating to civil bridge projects worldwide, including the following recent project examples: Poplar Street Bridge and the Wellsburg Bridge in West Virginia to name a few.

The Energy Transition and Engineered Heavy Lifting by Mammoet