VINCI has been awarded a €400 million contract to build the new Ang Mo Kio metro station on the Cross Island Line (Line 8) with the associated tunnels.

VINCI Construction subsidiary, Bachy Soletanche Singapore, in a joint-venture with Gammon Construction and Engineering, will carry out the design-build contract which is described as technologically challenging in a very tight urban environment.

This project is part of the Cross Island Line Phase 1 (CRL1). The CRL is the eighth line in Singapore’s mass rapid transit system (MRT). This Phase will be 29 km long and have 12 stations, and in due course simplify travel as well as connections between the various rail lines reaching some 100,000 households. This new line will improve access to industrial areas, leisure parks and new business hubs in the city.

The contract was awarded by Singapore’s Land Transport Authority and covers construction of: 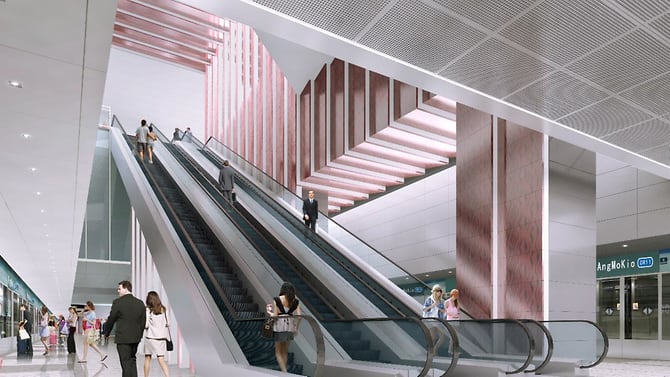 Works are expected to begin in the fourth quarter of 2021 and the station is due to open in 2030.Bachy Soletanche Singapore, which has been pioneering geotechnical and foundation engineering solutions for more than 50 years, will also team up with Soletanche Bachy International and Bessac, a subsidiary of Soletanche Bachy, specialises in tunnels and microtunnels.

Building this new station in a tight urban environment, with challenging ground conditions, will require unique technical expertise. To reduce vibration and control the excavation, the consortium will use innovative equipment including the Hydrofraise® equipped with “grippers”, which in particular limits vibration during hard soil excavation.

Bachy Soletanche Singapore is working on other public transport underground infrastructures projects in this country, including construction of the tunnel between Suffolk Walk in Newton and Novena Rise, and three metro stations on the Thomson–East Coast line.

An artist’s impression of the entrance of the Ang Mo Kio interchange MRT station along the Cross Island Line. (Image: LTA)