For the decommissioning of a coal fired power station in the small northern Italian town of Vado Ligure, Vernazza Autogru deployed multiple cranes from their fleet, two all terrain cranes Demag AC 800 and Liebherr LTM 1300 6.1 and a crawler crane Demag CC 3800.

“Without a large, powerful crawler crane, there’s no way we could have done this job,” explains Engr. Giulia Vernazza of Vernazza Autogru. Due to the cramped conditions at the worksite in Vado Ligure, suitable set-up spaces for the project were located some 70 meters from the load, making it impossible to use only telescopic cranes to efficiently execute the lifts of the heavy conveyor belt sections. The Demag® CC 3800-1 from Vernazza Autogru’s fleet was therefore needed to get the job done.

However, before the coal conveyor system at the decommissioned ‘Tirreno Power’ plant could be dismantled, the Demag crawler crane had to be transported to a worksite in the industrial district of Vado Ligure, using a total of 25 trucks. Due to the limited space available, the crane components and equipment were transported to the site in the order in which they were needed to assemble the crane. “The ease of assembly that sets the CC 3800-1 apart proved to be a decisive advantage,” says Giulia Vernazza. This was all the more important given the spacial constraints of the site, which were anything but generous. “Our five assembly technicians had to set up the crane with a 72-meter-long main boom, but they had an area of just 50 meters available to do so,” she explains. To achieve this, the final sections of the boom had to be assembled at height, using platforms made of concrete blocks and azobé wooden beams which were erected specifically for this purpose.

The pipeline was disassembled into a lot of portions with a length of 20 m and a diameter of 4.5 m. The lifts were performed at a height of 35 meters, with a working radius of 70 meters and in tandem with the assist cranes. 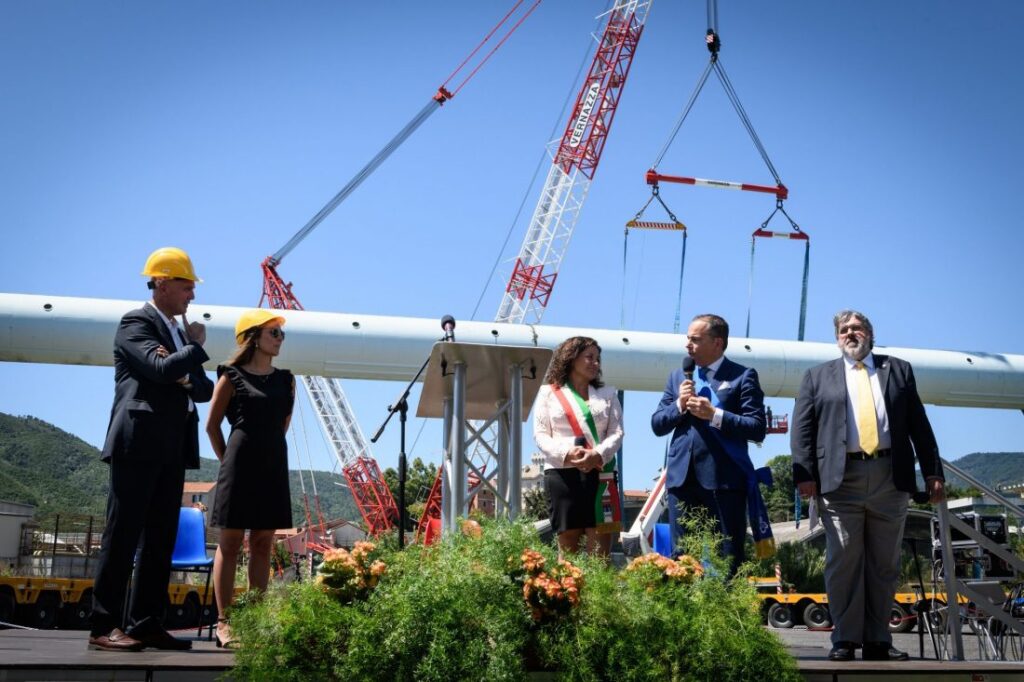 Vernazza Autogru celebrates the first structural intervention to disassemble the coal pipeline of the ex thermoelectric power station Tirreno Power in Vado Ligure. A fundamental historical step for the industrial reconversion of these areas and the beginning of the new Logistic Center of Vernazza Autogru.