Following the announcement that CrossWind received the permit for the Hollandse Kust (noord) offshore wind farm, Van Oord is pleased to confirm that it has been contracted for the Balance of Plant scope. CrossWind is a joint venture between Shell and Eneco. 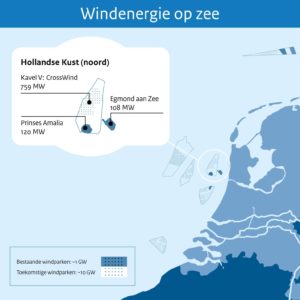 Offshore wind is essential in achieving the energy transition in the Netherlands. In the 2030 Roadmap for offshore wind energy, the Dutch government states that more than 11 gigawatts (GW) of offshore wind farms will be built and connected to the mainland by 2030. Over the past years, Van Oord has played an important role in the development and construction of several Dutch offshore wind farms, such as Gemini Offshore Wind Park and offshore wind farm Borssele III & IV and site V. Hollandse Kust (noord) will have an installed capacity of 759 MW, generating at least 3.3 TWh per year. This is enough renewable power to supply more than 1 million Dutch households with green electricity. CrossWind plans to have the wind farm operational by 2023.

After the contract had been awarded to Van Oord Tjalling de Bruin, Project Director CrossWind, said, “We are looking forward to working with our partner Van Oord to deliver the offshore wind farm Hollandse Kust (noord) in the Netherlands. With signed contracts in place and the Final Investment Decision taken, work can start in order to deliver clean energy by 2023.”

The seafastenings for the towers, nacelles, and blade racks were designed by TWD. Read on...