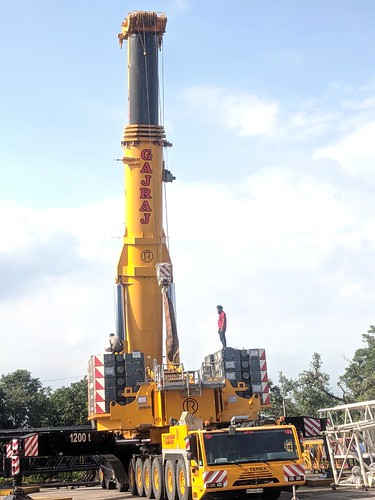 GAJRAJ – that is the name written on the boom of the Demag® AC 1000-9 owned by Indian crane service provider Steel Carriers, and it is impossible to miss it. “The name means ‘king of the elephants,’ which is what our employees decided to call our AC 1000-9 due to the fact that it’s the biggest and only telescopic crane of its type in all of India. And when you really think about it, the name makes perfect sense,” explains Sunil Makad, owner of both Steel Carriers and the “King of Elephants,” which recently got to show its proverbial strength while lifting a tunnel-boring machine in Mumbai.

The site was the “Bombay Central Metro Station” right in the middle of Mumbai. “We had to pick up a 100-tonne tunnel-boring machine at a radius of 20 meters from below ground and bring it up to the surface,” Sunil Makad reports. No other all terrain crane in India would have been able to do this, and using a crawler crane was out of the question due to issues of cost-effectiveness. In fact, setting up a crawler crane under the tight space conditions at the work site would have taken significantly more time, which would have been wildly out of proportion to the short project duration of eight days. However, this does not mean that setting up the AC 1000-9 was without its challenges for the Steel Carriers team: After all, the restricted space required the team’s extensive skills and experience when it came to setting up the crane in such a way as to ensure that the demanding lift would be successful. And this was no mean feat given the load’s weight and the lift’s large radius, which meant that the AC 1000-9 had to be equipped with its full 228-tonne counterweight for a boom length of 30 meters.

Before all these preparations could be carried out, however, the “King of Elephants” had to travel from the Steel Carriers workshop in Mumbai to the work site. In order to avoid the Indian metropolis’ daily traffic, the team took the crane and the trailers carrying its equipment to the site late at night with four trips every night. “The reason we had to split up the transport that way was that space at the work site was really tight, so having the crane come in with all its equipment at once was simply impossible,” Sunil Makad explains. Nevertheless, the AC 1000-9 unit’s ease of assembly and the team’s extensive experience made it possible to put the crane together and have it ready for the lift in only one day and with only four people: the crane operator, a supervisor, and two assembly technicians.

In addition to the powerful crane required for the job, staying on schedule was one of the crucial factors in the project, as the deadline for completing the new metro line was inexorably approaching and left no room whatsoever for delays. In addition to this, Steel Carriers refused to sacrifice meticulousness for the sake of expediency, as the job was anything but simple: “During the lift, the load on the crane hook and the working area itself were not in the operator’s field of view. In other words, he was completely dependent on the instructions provided by his co-workers through their walkie-talkies, as well as on their hand signals,” Sunil Makad reports. But despite these challenges, the expertise and perfect coordination of the Steel Carriers team made it possible to carry out the lift with utmost precision. This also impressed the customer’s high-ranking representatives, who were there both while the crane was being set up and while the lift was being carried out and had nothing but praise for the crane’s and the Steel Carriers team’s reliable performance. And Sunil Makad was happy as well: “Our team did an extraordinary job. We showed once again that we can carry out the toughest jobs with the AC 1000-9 and our experience and meet our customers’ expectations.” Moreover, he knows that his team can always count on Tadano Demag Service in the event that any unforeseeable difficulties arise: “The response times are extremely fast, spare parts are reliably delivered, and all other forms of assistance are absolutely dependable. And we know that with this support behind us, we can tackle any job without hesitation and help strengthen India’s infrastructure network,” Sunil Makad says, explaining the goals that drive his company.