Working in Spain’s largest wind farm: the crane and heavy transport company Transbiaga is working with three new Liebherr LG 1750 lattice boom mobile cranes in the wind farm Gecama. There, 67 wind turbines with a hub height of 120 metres are being erected to feed energy from renewable sources into the national power grid.

Four Liebherr LG 1750 lattice boom mobile cranes, 67 wind turbines and 120 metre hub height: full operation for the heavyweights at the Gecama wind farm in the Spanish province of Cuenca. The components of the concrete towers weigh up to 255 tonnes. The nacelle, including the generator, weighs 140 tonnes. The rotor blades weigh 21 tonnes and are 74 metres long. “In addition to our three new LG 1750s, there is also an LG 1750 from Grúas Ibarrondo, our partner in this wind project,” says Jon Usabiaga, CEO of Transbiaga. The turbines were manufactured by the Nordex Group, one of the world’s largest manufacturers of wind turbines, based in Hamburg and Rostock.

Transbiaga is very familiar with the use of the Liebherr LG 1750 lattice boom mobile crane, as the company already has five other units in its fleet. “In addition to its good operability, we also chose this crane model because of its high load capacity and mobility, factors that meet the needs and requirements of a wind farm. We bought the new equipment with the even stronger SX boom system. This means we are also well positioned for the future generation of wind turbines,” reports Jon Usabiaga. “The cranes are configured with 165-metre main boom and F-jib.”

The three new Liebherr LG 1750s complement Transbiaga’s machinery perfectly, “as we use them as main cranes for wind farm assembly. They are indispensable to carry out this type of project in the most efficient way and with the highest possible quality,” Usabiaga points out. “They are particularly well suited to work in wind farms, as they can travel independently on the paths between each turbine. They have a smaller width than a crawler crane.” Transbiaga focuses its work mainly on the assembly of wind farms in Europe and Latin America. To be able to carry out this type of project, the company also has eight units of the Liebherr LR 1600/2W narrow track crawler crane, which is also predestined for driving on narrow tracks in wind farms. 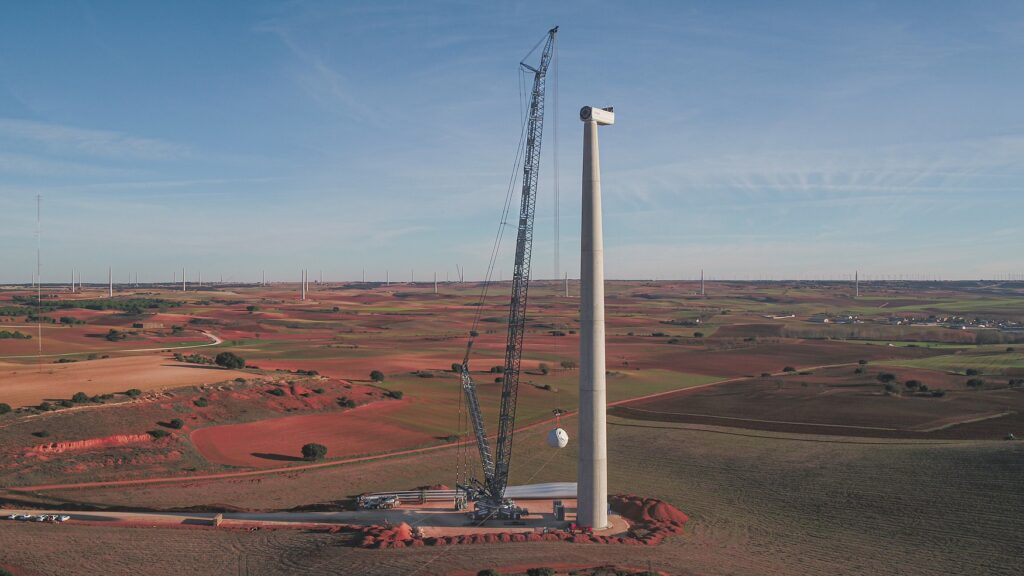 The Gecama wind farm, owned by Enlight Renewable Energy, is the largest wind farm in Spain built in a single phase. Located in the province of Cuenca, it will cover an area of 41 km2 and have almost 80 km of road network. Gecama will have an installed capacity of more than 300 megawatts, generate around 1,000 gigawatt hours per year and save 160,000 tonnes of CO2 emissions.

For Transbiaga, the work on the installation of the Gecama wind farm is very important. Usabiaga reports: “We are proud that such renowned customers as Nordex trust us to carry out this type of wind project. This means that we are among the benchmarks in the industry worldwide, both in terms of the capacity of our fleet and our work teams, and in terms of maintaining high safety and quality standards.” The construction of this wind farm is part of a series of projects that Transbiaga has been carrying out in Spain for years for Nordex, one of its largest customers. Other active projects are in Sweden, Chile, Brazil, Mexico and Puerto Rico. Expansion to other countries is planned for later this year.

Transbiaga has a fleet of 49 cranes. 43 mobile and crawler cranes with telescopic and lattice booms are from Liebherr, testifying to the trust Transbiaga has in the quality and performance of Liebherr products and customer service.

Components of the concrete towers weigh up to 255 tonnes. The nacelle with the generator of the Nordex DELTA4000 wind turbine weighs 140 tonnes. The rotor blades weigh 21 tonnes and are 74 metres long.