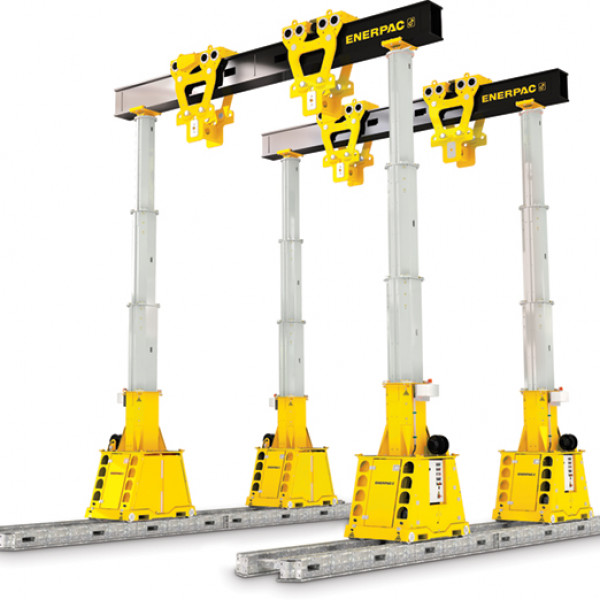 The import/export shipping specialist, TIBA Group, was managing the delivery of three locomotives scheduled to arrive at Chile’s Terminal Cerros de Valparaíso (TCVAL) in November 2021. Knowing that they had to unload the three engines as quickly as possible to control costly port fees, TIBA Group contacted Engineered Rigging (ER) and our South American partner TECNOGRUAS, to develop a lift plan that would safely expedite the removal of the three railway engines from the ship, transport them 1 kilometer to the port’s railway system and lift them onto the railway tracks.

The railway engines were massive, each one weighing 150 tons and measuring 21 meters long and 4.5 meters high. Our engineers quickly went to work, assessing the load, ship dimensions and port guidelines, and conducting several engineering studies. The winning plan identified the use of an Enerpac Super Boom Lift (SBL500) gantry, an Enerpac SSU300 powered slide shift, and two Goldhofer PST/SL-E6 self-propelled modular transporters (SPMTs). With 12 axles and pivoting wheel assemblies, the SPMTs can move forward, backward and sideways. The locomotives would be removed sequentially.

On November 23, the cargo arrived as planned on the BBC Maryland, and ER/TECNOGRUAS had technical personnel on site to set up the gantry system and a power side shift adjacent to the railroad track. They also positioned the SPMTs next to the cargo vessel.

On November 24, our ER/TECNOGRUAS crew of nine put the plan into action. Once the first locomotive was placed onto the nimble SPMT, our technician navigated the trailer through the port to the gantry. Our technicians secured the load and expertly lifted the 150-ton locomotive off of the SPMT using the gantry equipped with the powered side shift. The technical team then used the powered side shift to move the locomotive above the railroad tracks. The gantry system then lowered the locomotive onto the tracks The team repeated the maneuver two times. The three locomotives were unloaded and transported to the tracks in just nine hours.

“By combining innovative engineering with our in-house fleet of heavy lifting rental equipment, Engineered Rigging and our Latin American team at TECNOGRUAS completed the locomotive project at TCVAL in a fast, safe and efficient manner,” shared Arnol Salicetti, ER’s representative in Chile.

Mammoet Lifting and Installing on Linde Upgrade Project in Singapore

Goldhofer to Launch Air-Suspended TRAILSTAR at IAA Transportation in September