The Spine at Liverpool's Paddington Village Gets a Lift from Ainscough's Liebherr LTM 1300‐6.1 – Heavy Lift News

The Spine at Liverpool’s Paddington Village Gets a Lift from Ainscough’s Liebherr LTM 1300‐6.1 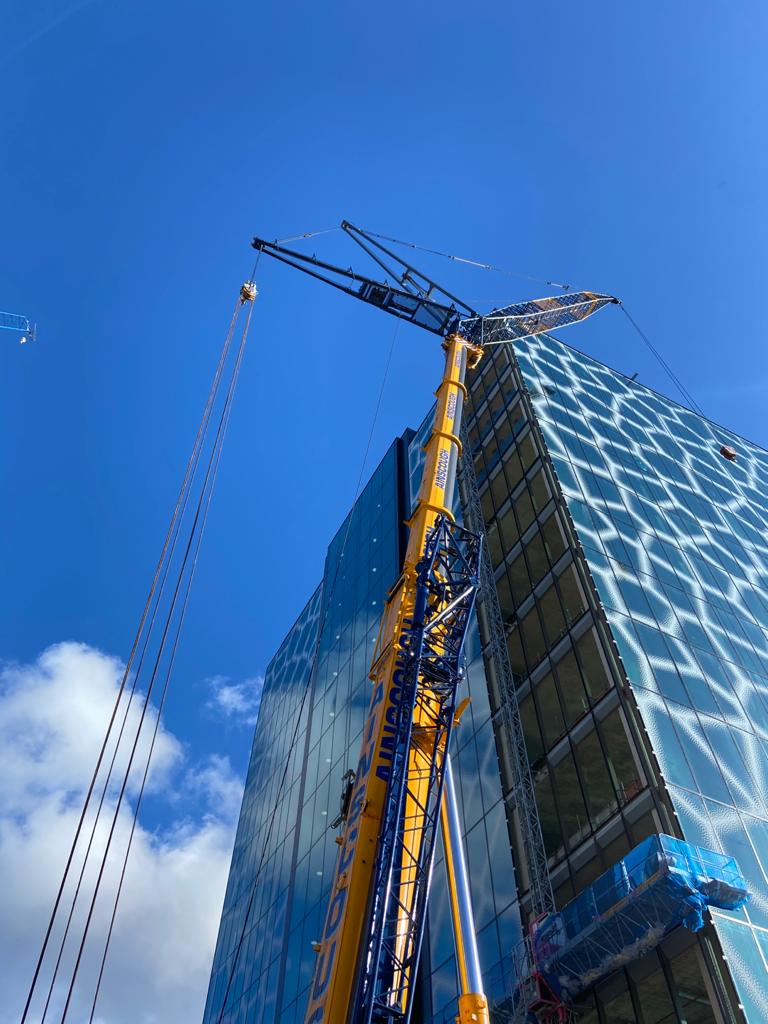 The Spine is the flagship building within Paddington Village, the £1bn development project within the city’s Knowledge Quarter. The 30‐acre site is being developed by Liverpool City Council in three stages and is currently in its first phase known as ‘Paddington Central’.

In early October, over a long weekend, team members from Ainscough’s Preston and Manchester depots worked to lift new air‐handling units (AHUs) onto the top of the building for the client, M&E contractor TClarke, working on behalf of main contractor Overbury, who are completing the fit-out of the building. The overall project is being delivered by Morgan Sindall Construction.

The crane operators were Phil Aldred, Dean Shockledge, Stuart Ball and Gino Re, whilst Phil Kennedy and Jeff Haylock acted as AP/Supervisors, who managed the lifting operation throughout the weekend, supported by the Ainscough transport department.

The team arrived on site on Friday to assemble the crane and clear the site to ensure maximum safety for both operators and the general public. However, they were unable to carry out works during the Saturday due to adverse weather conditions. On Sunday, they, therefore, worked quickly to carry out the full lift during a single day, completing the work within this tight time frame to enable the site to be reopened on Monday morning.

This was a particularly challenging job given the complex dimensions of the lift. At 64 metres high, the roof of The Spine building necessitated the use of a 300t Liebherr LTM 1300‐6.1, which utilised a 53.6m main boom, and 42.0m luffing fly jib, which had to be reduced to 28.0m halfway through the lifting operation, to reach other areas of the roof.

Ainscough has been carrying out works on Paddington Village for a few months, including the development’s new Novotel hotel.

Ainscough Contract Lift Manager, Karl Dawson, said: “We are really proud to have completed works on The Spine. It’s one of the key buildings within the Paddington Village development and a fantastic asset for both Liverpool City Centre and the wider life science industry.

“Our team worked exceptionally hard to battle through the difficulties of working on a tight site, as well as having to tackle adverse weather conditions. It’s thanks to their skill, along with our superb crane equipment, that we were able to lift these AHU units into place in only one day.”