Tage Kristensen lifting at the end of the Pier

Operating on a very narrow strip…

Operating on a very narrow strip, the Liebherr LTM 1100-4.2 mobile crane from Danish crane contractor Tage Kristensen A/S relocated concrete components on the pier at Hanstholm, Denmark. Full concentration was required throughout the 8-hour job. Due to a lack of space, only one of the four outriggers could be fully extended. However, VarioBase® ensured that the job could be completed safely.

There was very little space available.

Surrounded by water on the left, right and at the rear, with an extremely small set-up area for the LTM 1100-4.2 – the team from Tage Kristensen had to manoeuvre with pinpoint accuracy for a job in Hanstholm to position the 100 tonne crane safely at the end of the pier. “There was very little space available. Only a single outrigger could be extended to 100 percent”, explains company owner Mark Kristensen. The LTM 1100-4.2 had to position a 7 tonne concrete component outside the pier using a radius of 14 metres. 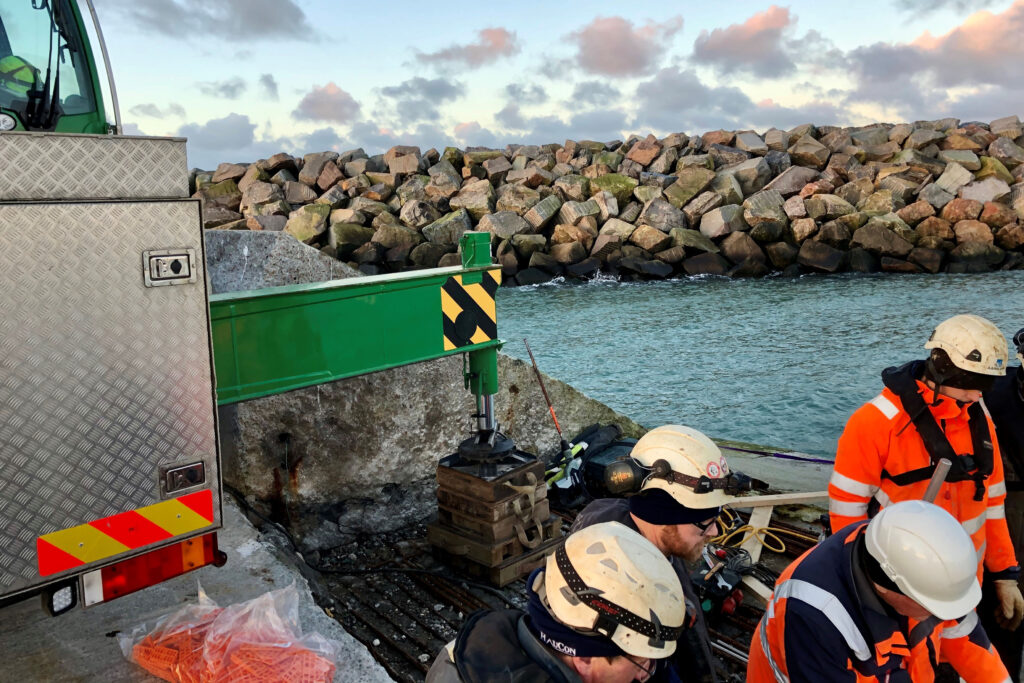 Only a single outrigger could be extended to 100%

Our LTM 1100-4.2 features VarioBase®. That made the job significantly easier and, more importantly, safer,” adds Kristensen. The Liebherr system calculates the maximum lifting capacities for any support configuration and ensures that the crane will operate safely beyond the LML load moment limiting system.

Mark Kristensen says: “The LTM 1100-4.2 is our first Liebherr crane. But we are delighted with our 100-tonner. A good after-sales service is also very important for us.”

Tage Kristensen A/S was founded in 1973 by the father of the current two owners, Mark and Kurt Kristensen. Paw Birkebo also recently joined the company as partly owner. With four mobile cranes, four loading cranes and several trucks, the company mainly focuses on repair work for wind turbines. Kristensen also carries out a very wide range of hoisting work near the company’s base in Hanstholm, as well as in other parts of Denmark.