“That was extremely close,” explains Adrien. He climbs out of the small fishing boat and sets foot on the pontoon. His gaze wanders to the bridge directly above him. “When we first passed through there was a gap of 50 to 60 cm between the leader and the underside of the bridge, due to the water level.” 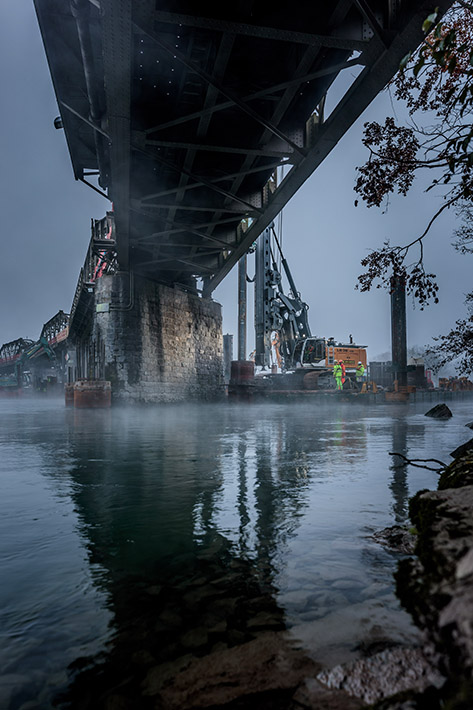 Birchmeier is erecting four piles around each pillar.

From the distance you can hardly see it. Thick fog surrounds the historical Aare Bridge in Koblenz, Switzerland. An SBB train rattles across it as if to make itself noticed. A familiar noise that has not been heard here for a long time, since the railway line was completely closed during the construction work.

The LB 36 drilling rig is working beside Adrien. It was a huge challenge bringing the 115-tonne machine here, and a spectacle for curious onlookers. In fact, a small harbour was specially built on the Aare in order to assemble the machine and it now serves as an access to the pontoon. From there, the drilling machine was transported upriver. After days of rain the high water level further intensified the situation and made the plan to manoeuvre the LB 36 under the bridge even more difficult.

“This is a very special water construction site,” acknowledges Daniel Kunz, Director of the contractor Birchmeier Spezialtiefbau AG. “We are operating with our drilling rig on a pontoon.”

The 130-year-old bridge needs to be renovated. “This is being done through four pillars. We are making four piles surrounded by a sheet pile wall for each pillar,” continues Adrien. As site manager he knows everything about the jobsite. Using the Kelly drilling method, Birchmeier is boring the 16 piles with the LB 36 from Liebherr. Each pile has a diameter of 1.5 m and is between 12 and 20 m deep.

Originally, it was planned that Birchmeier would reinforce the pillars in winter, when less water flows in the Aare. However, exactly at this time work must be stopped for the close season of the fish.

During the drilling work it also became evident how special this jobsite is. The workers cannot mark the water with the spray can. “We are using GPS for positioning. That works perfectly even though we are under a bridge and close to electric lines.” When the site foreman Patrick Fuchs talks about GPS, he means the assistance system LIPOS from Liebherr. “We have never had any interference with the signals and could always work. It’s a huge support for positioning the piles in the water.”

After the hole has been drilled and the reinforcement cages have been inserted, the next challenge is about to begin. Specifically, we have a bridge here. That means we can’t transport the concrete to the borehole with the truck mixer. We have to pump and have laid 280 m of concrete lines.” Because of excellent experience in the past, Birchmeier chose a Liebherr pump type THS 110 D-K for the job.

Despite all these challenges, Birchmeier was able to successfully complete the first building phase.