Covering an area of around 300 hectares, Überseestadt in Bremen is one of the largest urban development and port revitalisation projects in Europe. A Liebherr LTM 1450-8.1 mobile crane from Bremen crane specialist Sommer Kranverleih GmbH installed components weighing 20t for a connecting stair-well on one of the most striking building in the area, the 18-storey “Zech-Haus” at the head of Europahafen.

Überseestadt in Bremen is developing into a widely diverse mixed use area. In addition to services, offices, trade, port economy and logistics, it includes leisure, culture and residential sites. A special project is giving the head of the Europahafen a whole new look – Bremen-based entrepreneur Kurt Zech is erecting four buildings with a total floor area of 100,000 square metres and a total investment volume of 300 million euros. When they have been completed, they will provide space for 340 rental apartments, 20 shops, a restaurant and an enormous market hall. It is scheduled to open at the start of 2022. The highest building in the complex dominates the skyline with its 18 storeys and has become known as the “Zech-Haus”.

For three days at the start of February, a 450t mobile crane joined the giant tower cranes which have made the silhouette of Europahafen such a striking image since the construction project was started. Crane specialist Sommer erected the 8-axle Liebherr LTM 1450-8.1 mobile crane with 134t of ballast and a 52.5m luffing lattice jib. Crane operator David Hartung carefully threaded the prefabricated staircases and other components into the building and placed them gently in the positions that had been prepared for them. “A great team and a fantastic crane – everything went smoothly”, reports Hartung with satisfaction.

However, the constricted site posed a special challenge for using the crane. Andreas Meyer, Dispatcher at Sommer Kranverleih, explains: “The position for the large crane was extremely restricted with scaffolds being a particular obstruction. Fortunately, the ballast radius of the LTM 1450-8.1 can be reduced to handle these situations. Without VarioBallast® we would have had no chance”.

The ballast radius on the Liebherr 450t crane can be adjusted infinitely between five and seven metres using a simple hydraulic slewing mechanism. VarioBallast® is a massive benefit on constricted sites. For example, a radius of five metres is the sort of value you would expect from mobile cranes in the 200-tonne class.

Zech Group SE is a global medium-sized enterprise with family ownership. Gustav Zech founded a construction company in 1909 near Wrocław in what is now Poland, thus laying the foundation for the Zech Group. After the Second World War, the company restarted in 1945 in the form of a small craft company in Bremen. Today the group controls a number of branch offices and subsidiaries in several European countries from its Hanseatic headquarters. 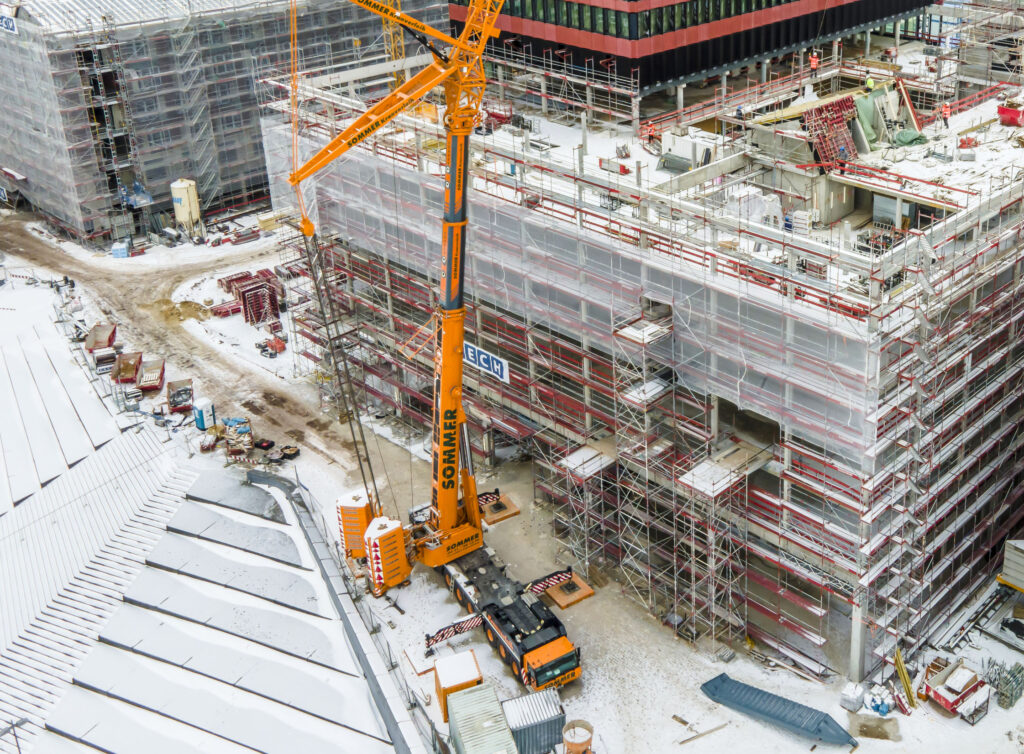 VarioBallast® on the LTM 1450-8.1 is worth its weight in gold on constricted sites.

Sommer Kranverleih GmbH was awarded the order to install components weighing up to 20t for the “Atrium Bridge”, a connecting stairwell inside the building complex, using a radius of up to 48m. This family-run company was founded in Bremen in 1957 and the third generation of the family is now in control. Its portfolio includes mobile cranes with lifting capacities of up to 800t, heavy haulage and equipment relating to crane and transport services.

Zech Group SE is a strategic management holding company which comprises three business units with their own operative management companies. A wide range make the company a competent partner in the fields of building, real-estate, and hotels. The wide-ranging, diversified group of companies concentrates on the value-added chain relating to real estate. With the features of a medium-sized enterprise managed by entrepreneurs, the Zech Group is capable of seizing opportunities quickly and adjusting its structures to the requirements of the market. 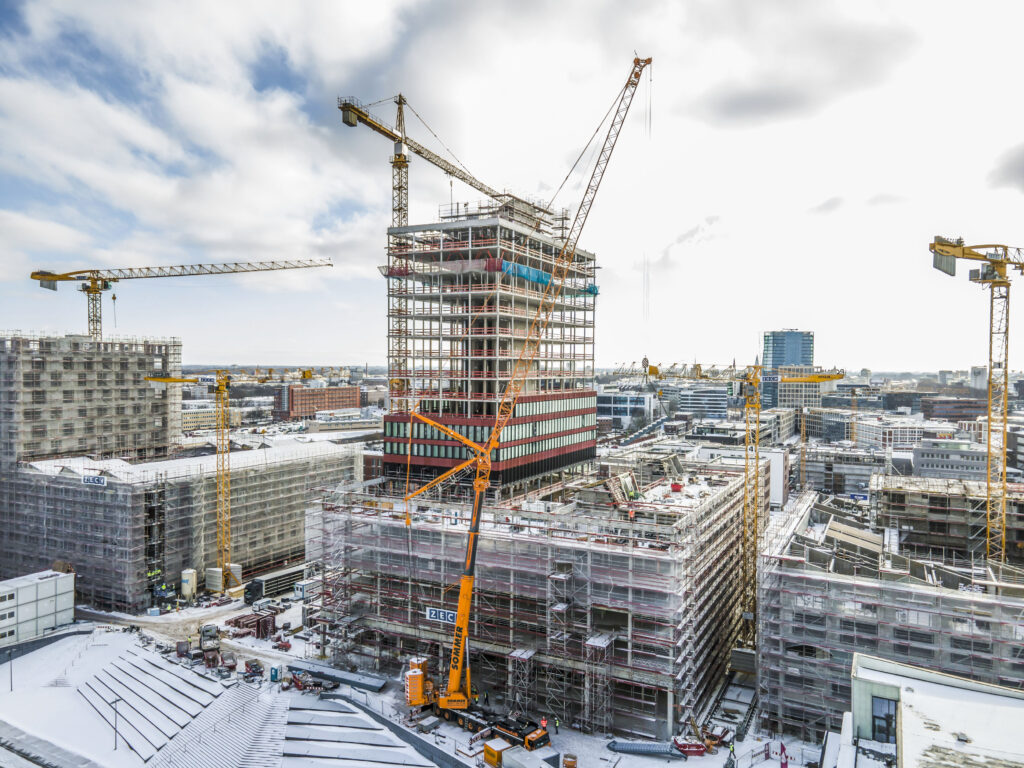 The 450t crane carefully threads the prefabricated staircases and other components into the building. 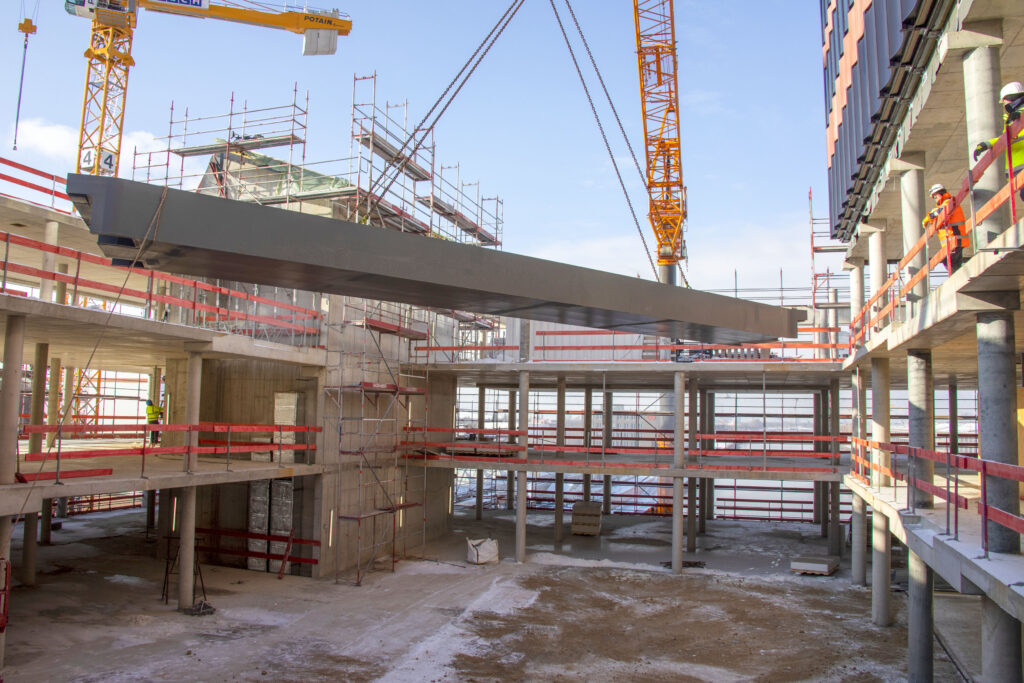 The mobile crane installs components weighing up to 20t on the “Atrium Bridge”, a connecting stair-well within the building complex. 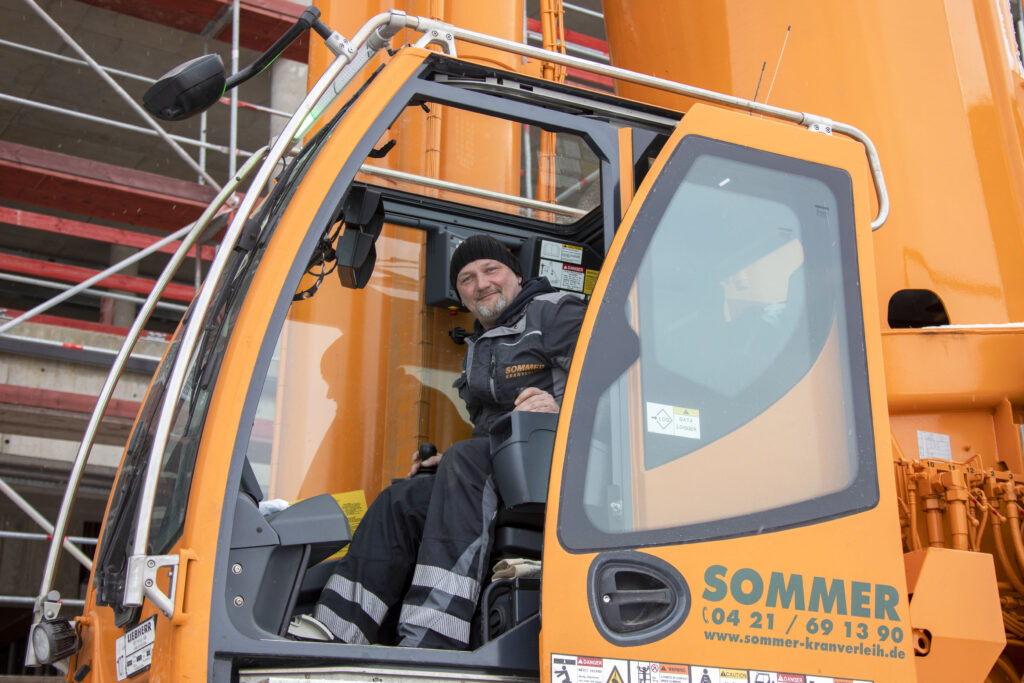 Crane operator David Hartung can rely on his machine and team for completing the complex hoists. 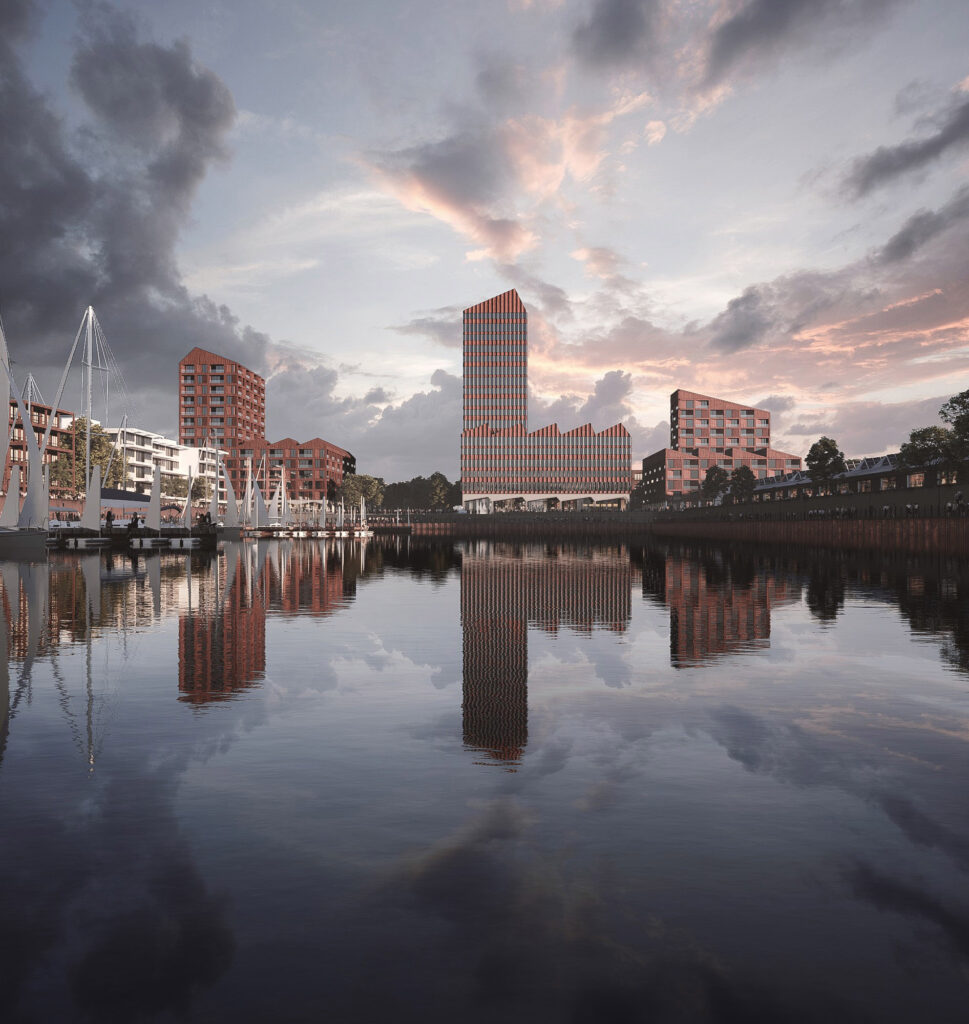 This is how the skyline at Europahafen will look when the work has been completed.

The high performance and compact dimensions of the LTF 1060-4.1 were major criteria behind the Steil Group decision who are active regionally and throughout Europe