Sarens was recently tasked with loading out six pieces of cargo, including three boilers and three fanskids, at the Navantia shipyard in Cadiz, Spain.

For this operation, conducted on behalf of client Fluor and project owner INEOS, Sarens used 56 axle lines of SPMT and a 5,8m link span ramp system.

Because of the weight of the boilers to be loaded out, combined with ground-bearing pressure restrictions, the transport arrangement needed to be fixed using a long 2 x 28 line SPMT arrangement. Additionally, due to the location of the cargo supports, the position of the SPMTs would have to be very restricted.

Sarens had to be ready to perform despite a number of initial unknowns: there was no definite date that the vessel would arrive or the cargo would be complete, for example. It was also impossible to know the weather restrictions in advance. Despite this, the team worked tirelessly to ensure that Sarens would meet the proposed load out dates.

Once the vessel arrived at the shipyard, Sarens transported each piece of cargo approximately 2km from the fabrication location to the quayside. The cargo included three 969t boilers and three 60t fanskids, all part of the project in Grangemouth that Sarens is also executing for the new INEOS energy plant.

Additionally, Sarens had to observe strict environmental criteria, including not exceeding 10m/second wind speeds, because each piece of cargo was so large.

“The award of this scope of work was quite last minute,” says project manager Kieran Brown. “But, as Sarens had already produced a lot of engineering around receiving the cargo in the UK, it made sense for our client to award this work to Sarens. Being able to reach out to colleagues who are local to the area, including Teresa Diaz Carlier and Francisco Alhambra Rizo, meant we had an excellent calibre of personnel to help execute this work: a real Sarens team effort.”

Sarens would like to thank the six-person on-site team, as well as the support staff executing the project from offices in Grangemouth, Scotland. Their hard work has made this operation another success! 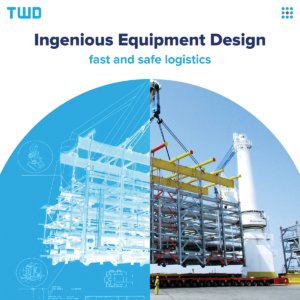 Spanish Debut for Liebherr LTM 1650-8.1 with Grúas Ibarrondo – The Ultimate Machine on 8 Axles

Transport and Installation of TBM by Sarens in Poland