Earlier this year, the Radeberg-based company Krandienst Kunze e.K. sent its Liebherr MK 88 Plus mobile construction crane to Dresden’s old town district to replace elements of the extensive glass roof of a shopping centre there. The conditions near Dresden’s Frauenkirche church: a narrow street, tricky lifts out of the atrium over a thirty-metre-high row of buildings and a considerable residential density. A perfect situation for an MK 88 Plus in electric drive mode. 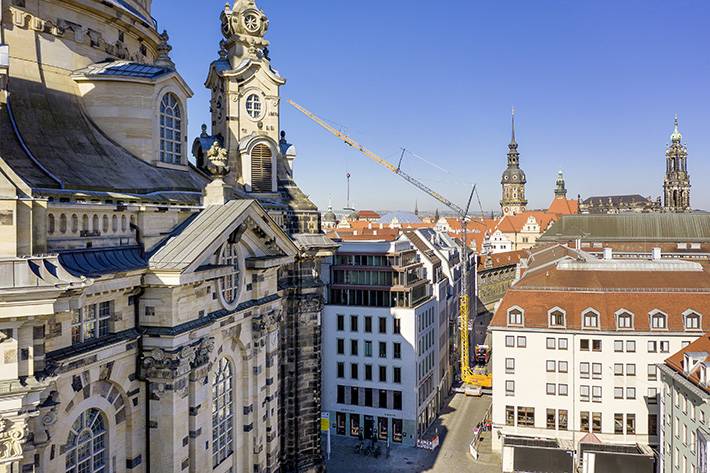 No sooner had the hydraulic outriggers been extended and the vehicle levelled that something quite unusual for crane operation occurred: complete silence. Crane operator Christian Jahn had turned off the diesel engine that had transported his MK 88 Plus into the beautiful city centre of Saxony’s state capital early that morning. “I’ll do everything else using site power, including the MK’s assembly,” explained the enthusiastic crane operator as he pulled the power cable out of the crane’s metal accessory box to tap power from the site’s power supply. Using his remote control, Jahn then activated the elegant unfolding mechanism for the tower and jib. The compact and modern mobile construction crane was ready less than 15 minutes later, its jib set at 30 degrees. His crane was now ready for work.

Jahn was also prepared for the long working day ahead. For the first few lifts (the scaffold erectors’ tools and materials still had to be transported to the construction site in the inner courtyard) he controlled his MK 88 Plus from the infinitely height-adjustable lift cabin to get an idea of the site’s topography. But he soon reached for his radio remote control and from that point onwards was on the roof with the installers, directly on-site for the lifting out of each of the up to 800 kg glass panels. “I can communicate much better with people and also react faster if I’m there on the spot. If I can see how the vacuum glass suction cups are positioned or how the heavy glass pane slowly releases from its mount, then I’m able to control with even more precision” he explained. The young crane operator set down the load on the other side of the building safely and with confidence; from a window opening onto the street, both the crane and its load as well as the installers were always in view. 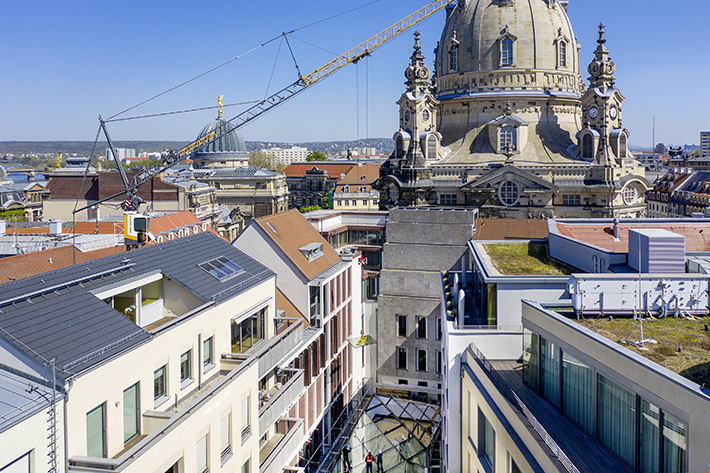 The option of operating the crane in electric mode and therefore completely free of noise and emissions had a further advantage in Dresden’s densely populated old town: the initially approved time window for crane work was extended an hour each way. “Being able to work for two more hours really makes a difference as we’re only here for a couple of days,” said a relieved Reimund Pothmann, one of the installers from the contracted company JET Brakel Aero GmbH, which is based in Voerde, North Rhine-Westphalia. The replacement of the roofing panels, covering a total of over 500 square metres, is being completed in several stages and the Liebherr mobile construction crane has already been booked for each of these.

The Liebherr MK 88 Plus has been in service at Krandienst Kunze since April 2019. Construction sites have now seen the advantages of this type of crane in terms of speed and safety and often specifically request a mobile construction crane,” says managing director Dirk Kunze with satisfaction. “Once the MK has shown what it can do on a construction site, companies want the crane back for their next project.” From Kunze’s point of view, the modern truck-mounted crane has been the ideal addition to his previous fleet of five Liebherr mobile cranes. And a good investment too. Crane driver Christian Jahn agrees, “These days I have around 4 jobs a week where a telescopic crane wouldn’t really be suitable.” In theory, the work in the Frauenkirche area could have been done by a construction crane, but as several jobs have been planned over the next few months and a construction crane is not permitted to stand in a pedestrian zone for the entire period, the city council didn’t grant permission for a tower crane. The mobile construction crane, which can be simply folded up and driven away once work is finished, was therefore the ideal choice.

Dirk Kunze is now totally won over by the Liebherr mobile construction crane concept. “I’m getting more and more enquiries about a larger crane of this type and am considering ordering an MK 140 in the medium term,” reports Kunze. The crane expert predicts that there should be more than enough work for the currently largest and most powerful crane in the MK series in Dresden, as well as in the busy company’s area of operation, which extends far beyond the state borders to Saxony-Anhalt, Berlin and Brandenburg, and intends to find out how the land lies in this respect over the next few months. With a jib length of 65 metres and a hook height of 94 metres possible in luffing mode, the “newcomer” could soon be showing off its advantages on the construction sites of Dresden and surrounding areas.

Russian contractor Avtokran-Tjumen placed an order for an LR 1500 crawler crane from Liebherr at the Bauma in April. That crane is now proving its strengths at the Adygeyskaya WES wind farm where it is erecting 2.5 MW wind turbines.