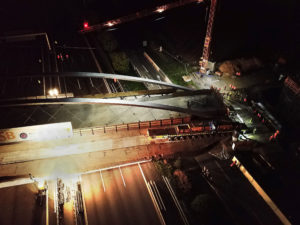 Spectacular transport assignment: With a total of four SPMT transporters, Schmidbauer moved the 1,500-tonne bridge along the motorway to its final destination.

Transporting a 1,500 tonne and 130 metre long bridge to its final destination via one of Germany’s busiest motorways requires the services of real heavy-duty professionals. In addition, such a challenging task requires a very special means of transport. It has to be reliable as well as strong, and also needs to be controlled with the highest degree of precision. Stefan Schmidbauer, Technical Manager of the Large Crane/Heavy Lifting Division and Managing Director of the Schmidbauer Group, and his team are indeed very experienced heavy lift experts. They opted to use SPMT  transport modules from SCHEUERLE Fahrzeugfabrik, a subsidiary of the Transporter Industry International Group (TII Group). 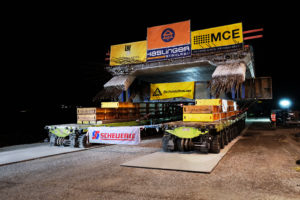 The 130-metre long bridge was supported on 56 SPMT axle lines and 224 tyres. This ensured the best possible protection for the road. Total load: 2,000 tonnes

In the night from 2nd to 3rd May, 2020, Schmidbauer took charge of the spectacular bridge transport operations. For this, Schmidbauer had to complete the transfer from the pre-assembly site in a field near the A8 motorway to the point of installation where it had to be positioned and set down precisely on four piers. Project planning and construction of the bridge took a total of seven years while the planning of the bridge transport itself took one year. As it happened, there was hardly any time left for the actual transport. The team had to move quickly during the night to Sunday because the traffic should flow again on the Monday morning. “Basically nothing could be allowed to go wrong during transportation”, explained Stefan Schmidbauer. “This is why we opted for SPMT axle lines from SCHEUERLE.”

A total of 56 axle lines were required in order to distribute the load of the bridge, support beams and sub-structure as well as SPMT modules totalling 2,000 tonnes over the 224 wheels so that the load on the ground was kept to an absolute minimum. In order to guarantee safe transportation of the bridge, Schmidbauer formed four individual transport platforms using the individual SPMT modules, each with 14 axle lines which were then driven using in a loose coupling mode formation. Four power packs from SCHEUERLE with a total output of around 2,000 hp provided the drive.

The transport and setting down were captured in the video linked below.

With a tolerance of only a few centimetres, the bridge had to be set down on the supporting piers. This was achieved without any problems thanks to the precise control of SPMT.