Australian heavy-duty specialists from Doolan’s Heavy Haulage have transported two 160 tonne crusher components using WideCombi axle lines made by SCHEUERLE. Due to the low dead weight and low height of the transport modules, the company was able to complete the task in a very short time as it did not have to resort to special time slots. According to those responsible for the assignment, the transport could not have been carried out as efficiently with other equipment.

Two tractors, with a total tractive force of 500 tonnes and 14 WideCombi axle lines from SCHEUERLE, were required to haul a 160 tonne crusher component measuring 5.5 x 5.5 x 5.0 metres from engineering service provider RCR Tomlinson, based in Welshpool, Western Australia, to its final destination in a quarry. The two vehicle combinations were employed at the same time throughout. A large international logistics company commissioned the heavy goods professionals from Doolan’s Heavy Haulage to execute the task. 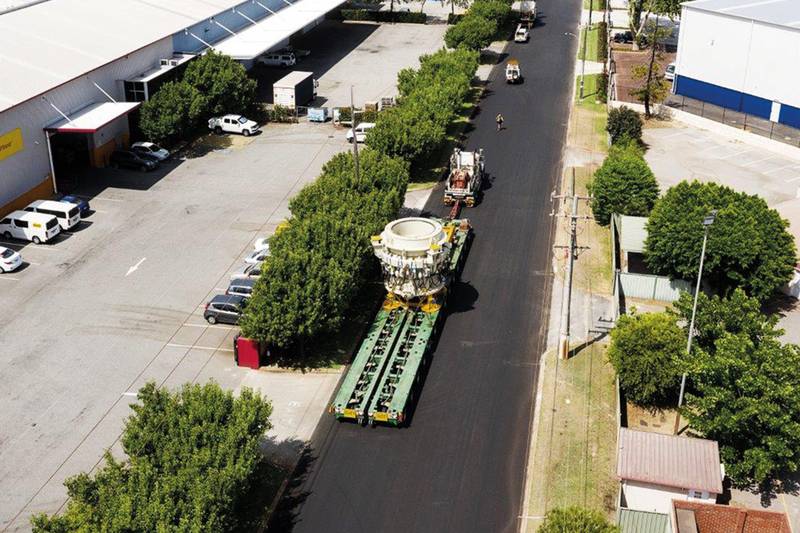 The two heavy-duty combinations had to travel around 1,400 kilometres – a route which featured a sufficient number of potential problems. However, due to the clever construction of the WideCombi axle lines, Doolan’s Heavy Haulage benefited from numerous advantages. Through the favourable distribution of the load weight on the axle lines and the relatively low dead weight as well as the low overall height of the transport vehicle, the two road trains were able to complete the majority of the route without neither a police nor power escort. In addition, the convoy was able to drive throughout most of the daytime and did not have to switch to short time slots. The power escort only had to lift power lines on a total of 2.5 kilometers of the trip so that the two trucks could comfortably pass underneath.

“If we had used transport equipment from local manufacturers, additional axle lines would have been necessary to distribute the load correctly. Because of the additional height of the transport, we would have needed the support of a power supplier to drive under power lines for 250 instead of 2.5 kilometres”, explained Ross Attwood from Doolan’s Heavy Haulage, who was responsible for the transport. The WideCombi from SCHEUERLE, a subsidiary of the Transporter Industry International Group (TII Group) owned by the German Otto Rettenmaier entrepreneurial family, was the vehicle best suited for this task.