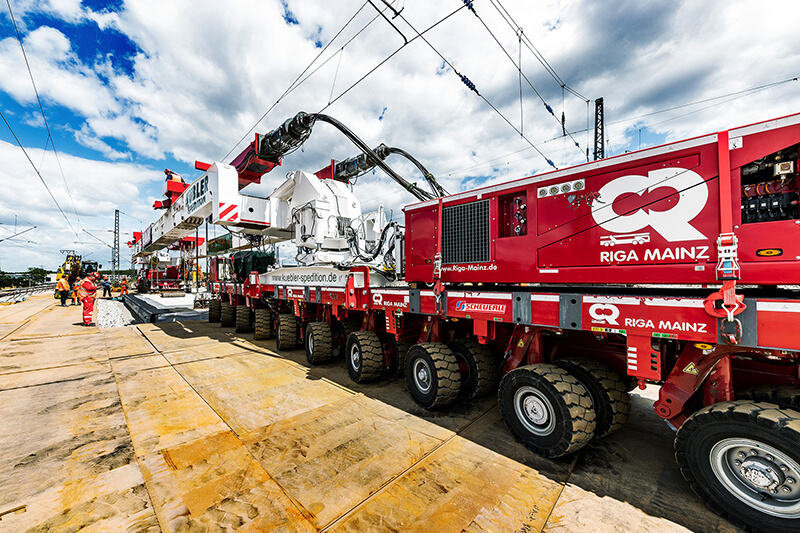 Riga Mainz were required to realise this very special task for the first bridge during the course of only one weekend thereby replacing a railway bridge in need of refurbishment with a new, 320-tonne concrete structure whilst, at the same time, without removing the overhead lines. The bridge is one of eight that run parallel to each another and cross the Mainzer Strasse in Darmstadt. The crane and heavy-load haulier from Mainz had been tasked to gradually replace all of them. There was, however, just one catch: While the first bridge is located close to the road, every other bridge is positioned six metres deeper in the direction of the track bed. “We could lift the first bridges while parked on the road to their designated positions using a mobile crane. But we couldn´t reach the remaining structures in this way at all. At the very least the use of a crane with a corresponding reach would be very complex and expensive. This is why we were looking for a more economical solution”, explained Uwe Langer, Managing Director of Riga Mainz.

The Mainz-based company had one year to develop an economical solution for the complex combination of transport, demolition and assembly. An important part of this assignment was the SPMT (Self Propelled Modular Transporter) from SCHEUERLE. A side girder deck between the two electronically connected transport platforms served to accommodate the new concrete bridge. Altogether, 20 SPMT axle lines were required to carry the total load of 570 tonnes. On the side girder deck, Riga Mainz installed a certain process technology that it had developed itself and which, according to the company, is unique in Germany and provides a lifting capacity of 500 tonnes. Another advantage of the lifting system, for which a patent application has been filed, is the relatively low overall height. As a result, the transport including the cargo could pass safely under the overhead lines. This saved the client a lot of time and considerable costs. 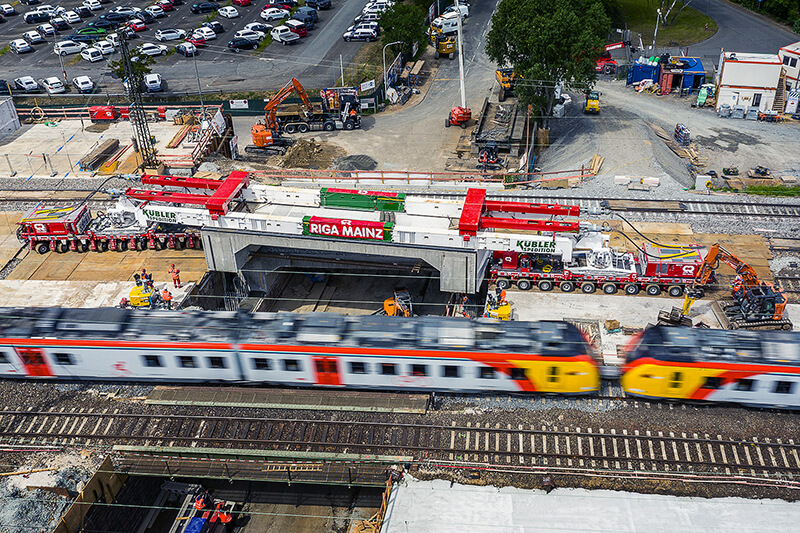 The Riga Mainz approach was as well thought-out as the transport modules and lifting technology. “We drive the two SPMT platform vehicles on the road under the old bridge, separate it from the anchorage and then push it out using the lifting system. Subsequently, we could move the old structure from the track bed onto the SPMT. Following this, we suspended the new bridge in the side girder deck and swung it over one of the other bridges onto the track bed. As soon as it reached the correct height, we carefully manoeuvred it sideways under the overhead lines into the resulting gap with the help of the electronic multi-directional steering and brought it into position there”, explained Langer. Riga Mainz repeated this procedure until all of the eight bridges had been replaced.

“We couldn’t have completed the assignment without SCHEUERLE’s self-propelled transport modules”, reported the CEO. “The SPMT is the best tool that is available for this!” praised Langer. “As a result, we will be purchasing additional SPMT axle lines from SCHEUERLE”. The company had acquired its first SPMT axle lines back in 2001 and has continuously added to its fleet since then. Riga Mainz mainly uses SPMTs in order to move columns in refineries and the chemical industry.

The Gateway Basel Nord and the Swiss Rhine ports (Schweizerische Rheinhäfen) are planning a key project in Basel to shift freight traffic from road to rail. To this end, the companies presented a nature conservation concept to the Federal Office for the Environment (BAFU) in October.