Floating solar is one of the new frontiers of offshore technologies with promising growth trends. According to the World Bank, the potential floating solar capacity that could be installed globally is as much as 400 GW, or approximately the same generation capacity as all the photovoltaic solar panels installed in the world until 2017. According to research conducted by Wood Mackenzie Power & Renewables, at the end of 2019 at least 2.4 GW of photovoltaic panels were installed on the water, across 35 countries worldwide. 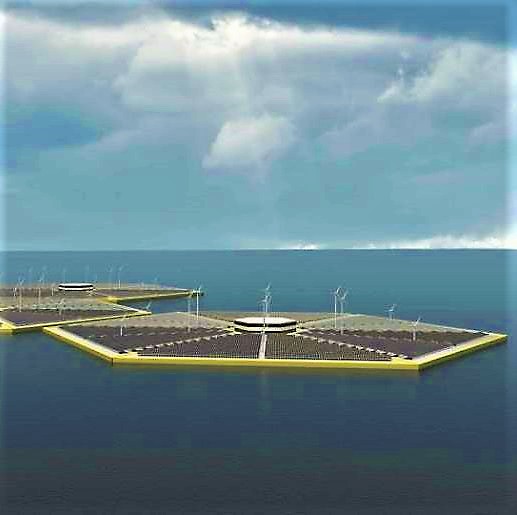 One of the advantages of floating solar technology is zero-consumption of soil: in recent years, we have seen the number of such installations growing precisely in those areas where the space dedicated to energy systems must compete with the one reserved for other equally strategic sectors, such as agriculture or industry. For this reason, floating solar has been widely tested in countries such as Japan, China and in general in Southeast Asia which must, in fact, cope with the lack of available land. In addition, the performance of the panels is higher than in ground installations: water and ventilation in fact help to cool the cells and dissipate the heat developed, improving their efficiency and productivity. For this reason, floating solar is often used in closed reservoirs, such as lakes or ponds, but there is no shortage of applications in the open sea. In addition, a floating solar system can reduce the evaporation of water during periods of drought and helps to limit the production of algae, which can jeopardize the quality of the water, especially in freshwater basins.

The Asia Pacific region plays a leading role in floating solar diffusion: 87% of the global floating solar capacity is currently concentrated here. Today, China has the largest amount of plants installed, with a capacity of around 1.1 GW. Japan and the United Kingdom follow, but India has also recently announced a plan to develop 10 GW of floating solar plants. All countries where the presence of free and under-exploited lands is scarce, and where there are – at the same time – numerous water basins, scattered over their territories.

Saipem and Equinor, with different but complementary purposes, have sensed the potential of this new and versatile technology. Moss Maritime, the Norwegian maritime engineering company controlled by Saipem and part of the XSIGHT engineering division, has signed a collaboration agreement with Equinor, with the ambition to develop, test and commercialize an FPV system for harsh environment. The floating solar solution for exposed marine environments or reservoirs is based on a modular system designed using relevant skills and competencies of both companies.

The modular floating solar system originally designed by Moss Maritime facilitates the manufacture, transport and installation of the components and makes it suitable for areas that are difficult to access or where there are no large water reserves, such as basins or artificial lakes. Furthermore, its flexibility and floating structure provide it with greater adaptability and resistance to adverse and changing sea conditions, allowing installation even in areas exposed to winds and waves. The floating “standard” modules – with a capacity of 24 MW each – builds up to 10-15 MW islands and are raised above sea level, favouring the ventilation and cooling of the panels. Modules can be combined to create systems – or islands – of various sizes, depending on the needs. Furthermore, this technological solution could be directly connected to the grid, be part of hybrid projects – through the combination of a floating photovoltaic solar park with a traditional oil or gas-powered plant – or integrated with marine wind farms. Through the new collaboration with Equinor, Moss Maritime and Saipem intend to create the basis for becoming one of the main suppliers of floating coastal and offshore solar parks construction solutions.

SAL Heavy Lift Bridges the Gap Between China and Norway