The Type 23 frigate was in dry dock at Her Majesty’s Naval Base Devonport in Plymouth for routine maintenance operations. One key aspect of these operations was the removal of two propulsion motors for refurbishment, each weighing 40t.

Time was a crucial factor in this project, to remove two propulsion motors from a type 23 frigate while in dry dock. With each week in dock costing over £70,000, it was vital to complete the operation on schedule. In addition to time this project also presents several other key challenges with significant space restrictions, very tight tolerances on alignment of the motors and the vast amount of additional maintenance works in the near vicinity.

ALE was chosen to execute the removal of both engines, due to its success in executing complex custom lifting manoeuvres under strict time pressure. In fact, this was the first procedure of its kind, as removal of propulsion motors had never been completed before in the history of the Type 23 fleet.

The project began with an operation on the ship’s hull, requested by ALE engineers from the client. A large opening was cut into the side of the ship prior to the heavy lifting team’s arrival. This was because during the ship’s construction, its motors were placed in situ and shipbuilding took place around them, leaving no easy access point for their removal.

ALE’s team first constructed a platform on the dock base and jacked it up the required 5m, such that it formed a continuation of the ship’s motor room floor through the opening. ALE engineers designed a bespoke skidding system which was to be installed within the motor compartment after the motors had been jacked up. Due to the ships design the load of the motors could only be supported in very specific positions within the motor compartment or by the ALE platform. This was due to the design of the vessel. 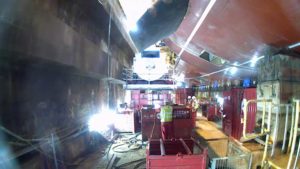 Starting with the Starboard motor ALE engineers jacked up the motor enough to allow the install of the bespoke skidding arrangement. This skidding system was designed to work with the sensitive geometric alignment of the motors and gearboxes and allowed the motors to be skidded on an angle. Thus, not affecting the gearboxes.

Each motor was skidded out onto the platform and lowered onto a waiting SPMT. The SPMT then moved each motor a short distance to the rear of the dock base, where they were crane lifted onto a Neck 4 trailer, upon which they exited the site.

Equipment used during this project included 6 axles of SMPT in 2 file 6 configuration, hijack frames, conventional and climbing jacks, Teflon skid tracks and shoes plus the specially fabricated beams. All lifting equipment both entered and left the dock base by means of crane lifting, within a space only 3m wide at its narrowest point.

The project was completed two days ahead of schedule, providing a substantial cost saving to the client. The repair itself forms part of an initiative to extend the life of the UK’s duke class fleet, which has proven versatile in a range of warfighting, peacekeeping and maritime security operations worldwide.