Rotterdam Looking to Increase Shore Based Power Facilities in the Port

The Port of Rotterdam Authority and the Municipality of Rotterdam want shore-based power to be available in the container, cruise, and liquid bulk sectors. To this effect, studies have commenced at the terminals of Hutchison Ports ECT Rotterdam (ECT), APMT2, Vopak, and Cruiseport Rotterdam.

“In the next few years, we want to give shore-based power a boost,” says Arno Bonte, alderman for Sustainability, Air Quality, and Energy Transition. “Once sea-going vessels and cruise ships are ‘plugged in’ when berthed at the quay, polluting diesel generators can be switched off. This has major advantages for the environment. It leads to less air pollution and also contributes to achieving our climate targets.”

With shore-based power sea-going vessels can obtain sustainable power from the quay. The Port Authority has calculated that the total energy demand, and therefore the consumption, of sea-going vessels in the port amounts to approximately 750-850GWh. This is equivalent to the energy consumption of 250,000 households. This means there is much to be gained in terms of air quality, liveability, and the climate. If vessels are ‘plugged in’ when berthed at the quay, diesel generators can be switched off, which is good news for the air quality and the reduction of CO2 emissions. 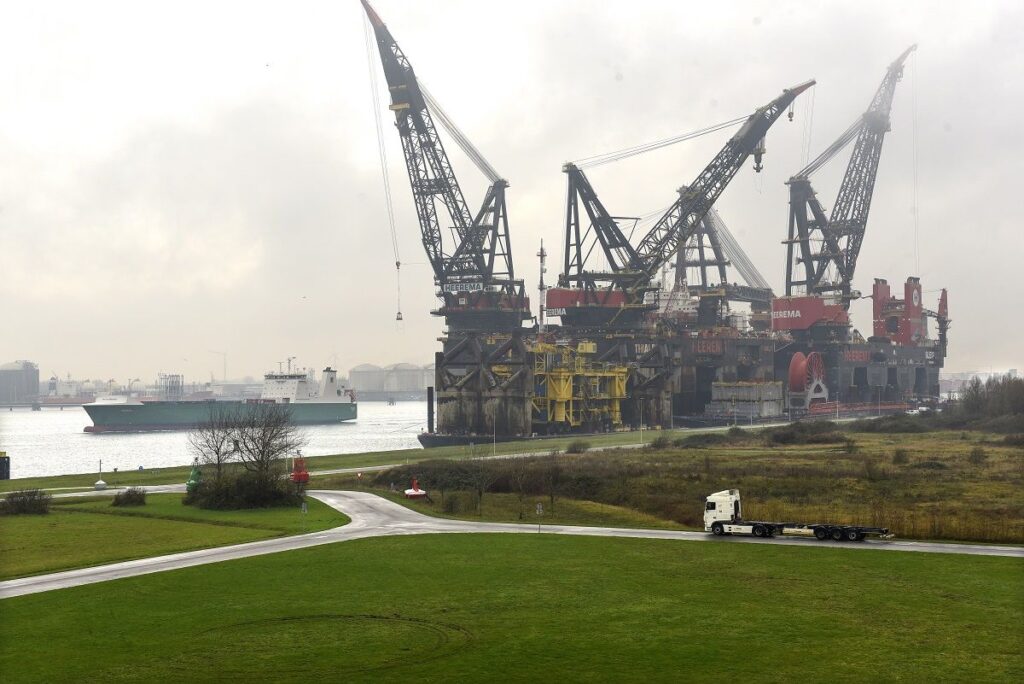 7 December 2020, Heerema’s Sleipnir and Thialf at Landtong Rozenburg in the Calandkanaal
(Photograph courtesy of Port of Rotterdam and  Ries van Wendel de Joode/HBR)

Before shore-based power can be installed at ECT (Amazonehaven), APMT2 (Amaliahaven), Vopak (Botlek), and the cruise terminal (Wilhelminakade), studies have to be conducted, as well as detailed technical, environmental, and social costs and benefits analyses, tendering procedures, and permit procedures. The studies will particularly focus on how shore-based power installations can be integrated with regular operations. Dimensioning of the installation itself, the space required on the quay, and the further integration with the existing electrical grid are important aspects that need to be dealt with.

If the studies remain on schedule, they should be completed in 2023. In the next phase, shore-based power is realised at the designated locations in the port of Rotterdam on the basis of the study findings. As soon as shore-based power is in place, it will be used at several dozens of vessel visits. This number will increase to hundreds of visits per year when more vessels are adapted for the use of shore-based power and more berths are equipped with an installation.

Heerema to Withdraw from Angola