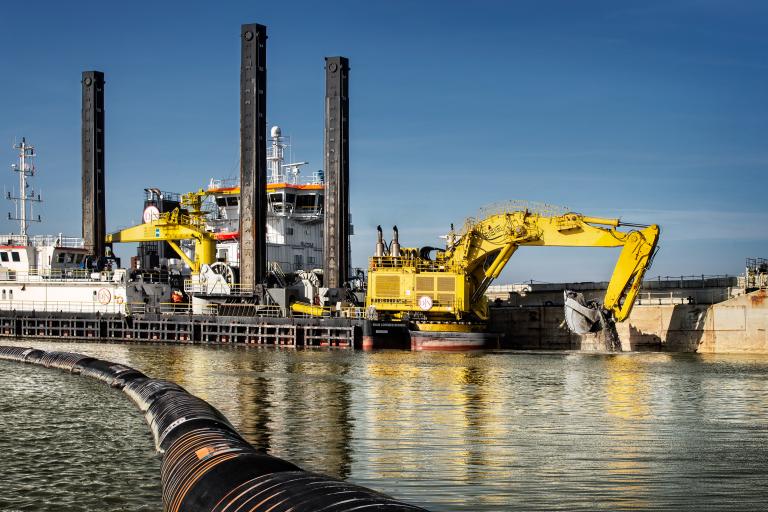 Thanks to the 140 metre long and 24 metre wide semi-submersible vessel, the difficult process of transhipping the floating excavator platform passed off without any problems. The “RollDock Sea” is able to submerge its stern to such a degree by flooding its ballast tanks that the loading area is below the water’s surface.

This enabled the “Gian Lorenzo Bernini” to float into the vessel at water level using the natural flow of the river Elbe and with the help of two tugs. It is important to have a particularly deep draft in the port to complete this kind of floating/floating manoeuvre where both the receiving vessel and the vessel to be loaded are both floating. Cuxport’s berth 4 has a draft of 15 metres and this made it possible to load the “Gian Lorenzo Bernini” in this way.

“Transhipping goods is not only possible by lifting and rolling processes at Cuxport, but also by floating – anything is possible and is professionally handled in line with our multi-purpose objective,” adds Roland Schneider, Head of Business Development at Cuxport.

The “RollDock Sea” is now heading to the next place of deployment for the “Gian Lorenzo Bernini” – Mozambique, where it will be involved in the construction of an LNG terminal.

Wagenborg RoRo Service to include Sundsvall