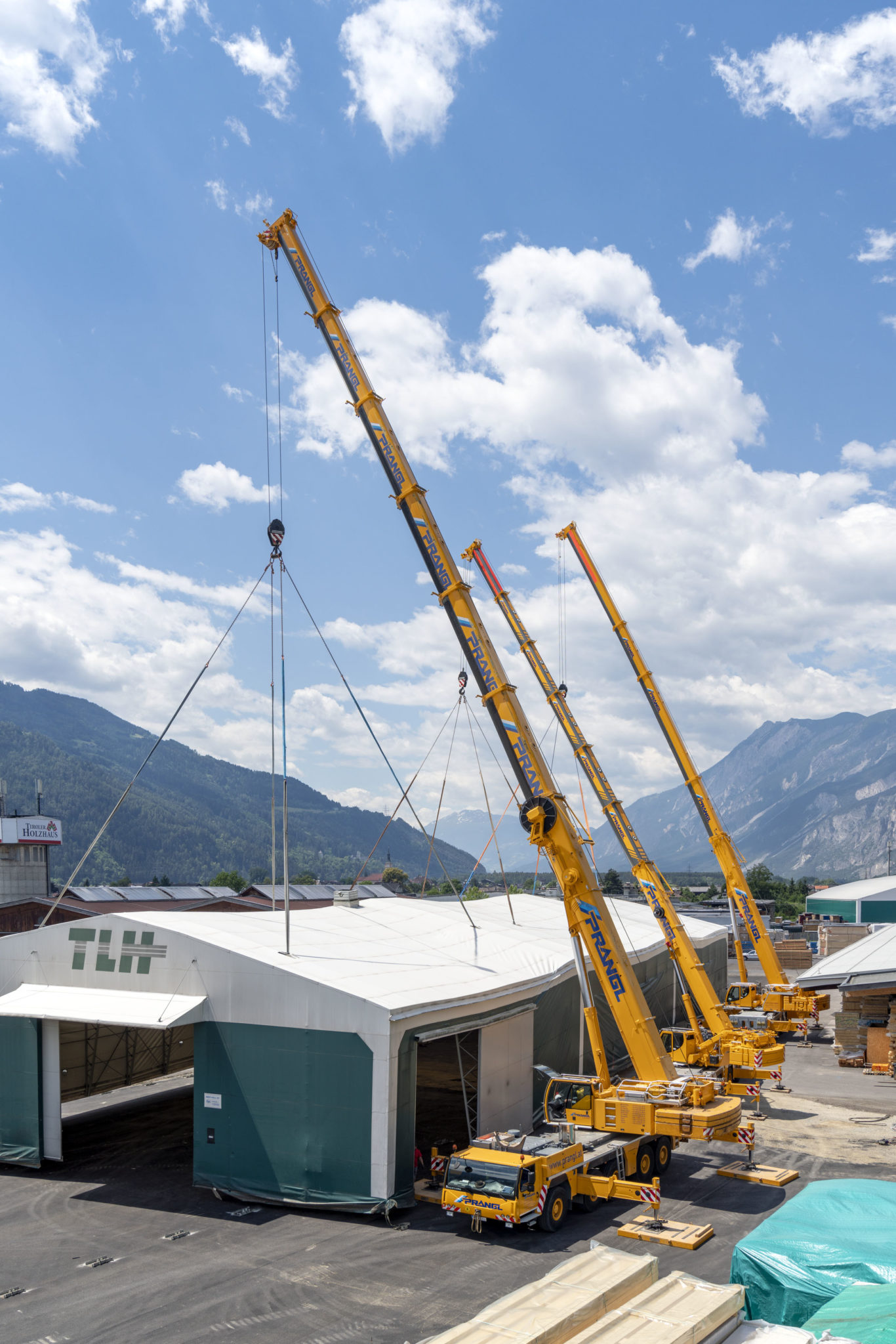 In stages – the Prangl team moved the 65 metre industrial tent structure around 13 metres during each of the eight hoists.

Tyrol, a popular destination for mountain and other hikers, was recently the scene of a very special trip – an industrial tent structure weighing over 40 tonnes and spanning an area of around 1,400 square metres “walked” around 100 metres in just a few hours. A large assembly hall was moved to its new location in several stages on the hook blocks of three LTM mobile cranes.

“We have often relocated buildings, of course, but they have always only moved a few metres”, said Oliver Thum, project manager and crane expert in the technical external services department at Prangl at the start of this unusual job, “but we have never had to move one over such a long distance”. The job was to move a large industrial tent structure used by a woodworking company in Silz (Tyrol) several hundred metres and realign the whole thing.

It was rather tight for the cranes at the start of the job as two of the Liebherr machines had to work in a narrow alley next to the industrial tent structure. That is why Oliver Thum used an LTM 1160-5.2 and an LTM 1090-4.2 (both featuring VarioBase® and VarioBallast®), two of the newest members of the Prangl crane fleet. “Due to the lack of room, we needed the variable support and the smallest ballast radius during the slewing process here “, said Thum.

A total of eight hoists were required, with the large industrial tent structure being moved around 13 metres each time, and repositioned with a slightly different alignment. Oliver Thum directed his three crane operators, who completed each individual hoist carefully, showing outstanding teamwork. Finally, in the afternoon the job was finished and the industrial tent was safely positioned at its new location. As an alternative to the crane job, the customer had considered dismantling and re-erecting the structure. However, the time required for this work would have been around one month for three or four fitters, leading the customer to decide on the faster relocation by crane. 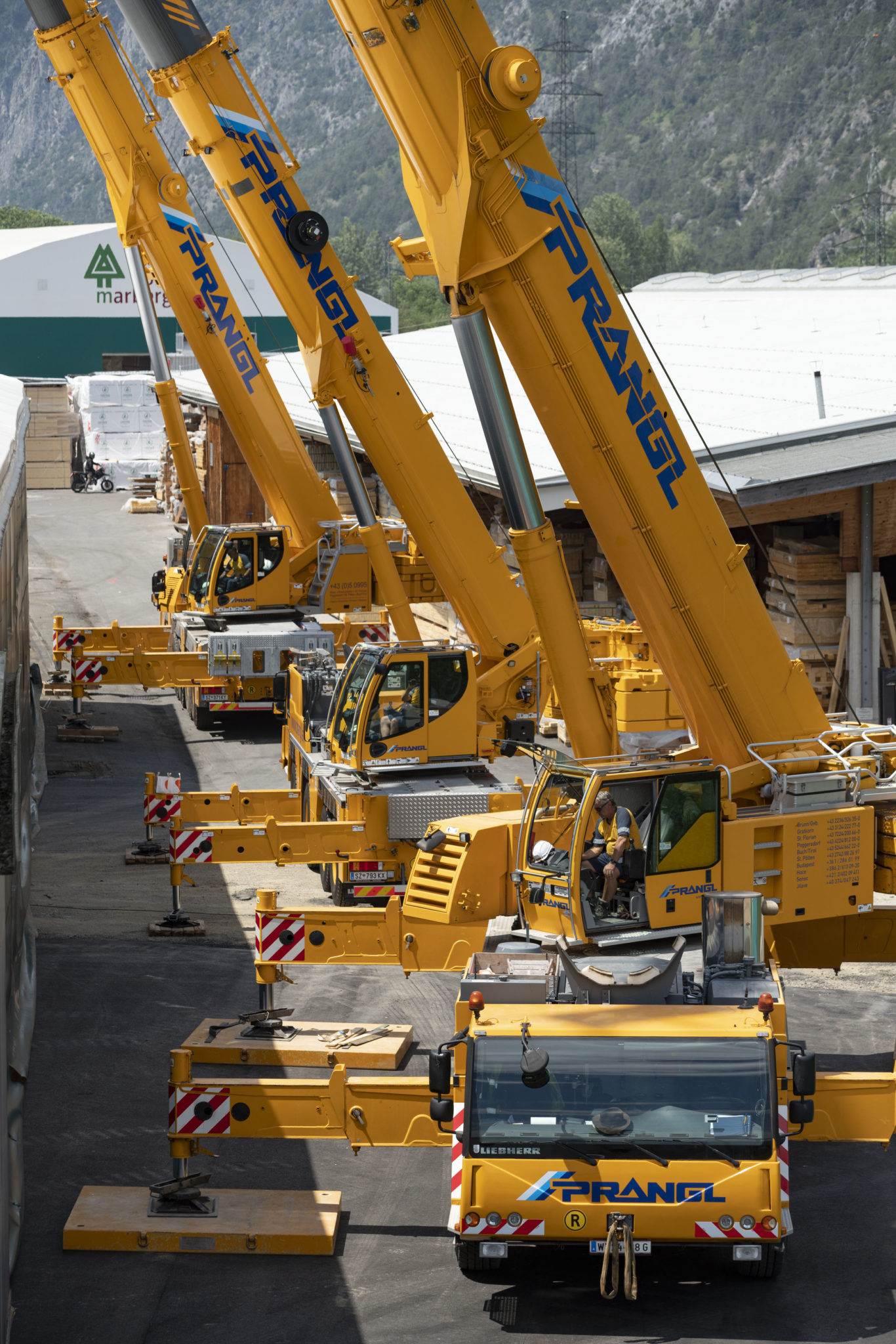 Tightly packed – there was very little space for the three mobile cranes to hoist the structure together – in the forefront you can see a Liebherr LTM 1200-5.1. 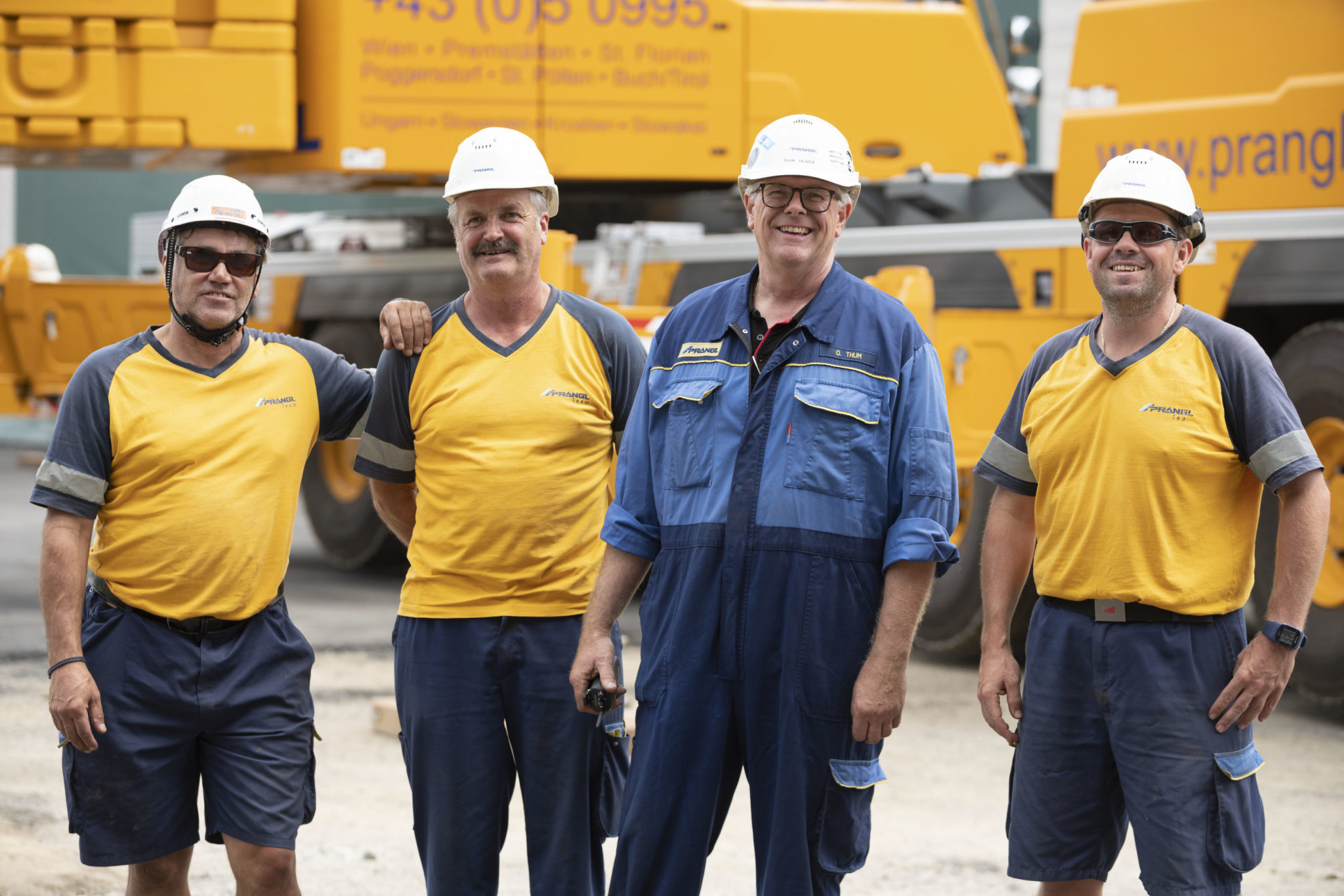 the Tent Walkers from Prangl

Practical features – the variable support and the adjustable ballast radius enabled the cranes to operate in a very constricted space.

Debut for The “Blue Beast” from the ALL Family of Companies