The Port of Rotterdam Authority has awarded the construction of some 2.4 kilometres of quays and earth-retaining walls in the Princess Amalia Harbour (Amelia Haven) to a consortium of HOCHTIEF, Ballast Nedam and Van Oord. With this, the Port Authority invests in major expansion of container throughput in Rotterdam.

The construction of the quays marks the start of the further development of the harbour located on Maasvlakte II. The development will increase annual throughput capacity in the port of Rotterdam by four million standard containers (TEU).

The new building work will be on either side of the harbour, which is approximately 2.5 kilometres long. In total, this includes 1,825 metres of deep-sea quay, 160 metres of inland shipping quay and 360 metres of earth-retaining walls. Barring 725 metres, this means that the entire harbour basin, which went into use in 2015, will be enclosed. The project also includes the construction of a 160-metre waiting area for general use by inland shipping vessels. The completion of the first 500 metres of quay wall is expected in late 2022. The final part of the project will be completed no more than eighteen months later.

In addition to the construction of the quays, which will have a retaining height of 29 metres, the work also involves dredging the quays to a depth of more than 20 metres below sea level. In order to accommodate the future container cranes, a rear crane track of approximately 1.8 kilometres will be constructed on piles.

The quays will be state-of-the-art, equipped with a wide range of sensors to monitor forces and any deformations. In addition, ECOncrete blocks will be installed at two locations to act as artificial reefs stimulating underwater biodiversity.

Boudewijn Siemons, Chief Operating Officer of the Port of Rotterdam Authority: ‘We are looking forward to working with HOCHTIEF, Ballast Nedam and Van Oord, on the basis of the values we share with them in terms of safety and sustainability.’

Ronald de Geus, Managing Director of Ballast Nedam Infra Projects: ‘By looking at the project from the perspective of various disciplines and together with partners in the value chain, various solutions were developed to come up with the most sustainable and efficient working method, for example, minimizing disruption in the local area by transporting most of the construction materials over water. This will ensure that the operations of the existing container terminals can continue un-interrupted during the course of the project.’

Dirk Osthus, HOCHTIEF Managing Director in the Netherlands: “We are proud of realizing this demanding project together with our partners and the harbor company”. HOCHTIEF has realized numerous projects in harbor construction, for instance in Hamburg or Gdansk/Poland. The new project is a further step to consolidate the position on the Dutch market.

Mark van der Hoeven, Director Netherlands at Van Oord: ‘We are paying special attention to reducing emissions during the execution, for instance by using Hydrotreated Vegetable Oil (HVO). HVO fuel has a carbon reduction of 89 percent compared with diesel and has lower emissions of particulate matter, nitrogen and sulphur. By deploying equipment powered by HVO as well as electric construction equipment, we are working fully in line with the Port Authority’s ambitions to significantly reduce harmful emissions.’

(HVO fuel leads to a reduction in carbon emissions of 89 percent by comparison with diesel and it also produces lower emissions of particulate matter, nitrogen and sulphur.) 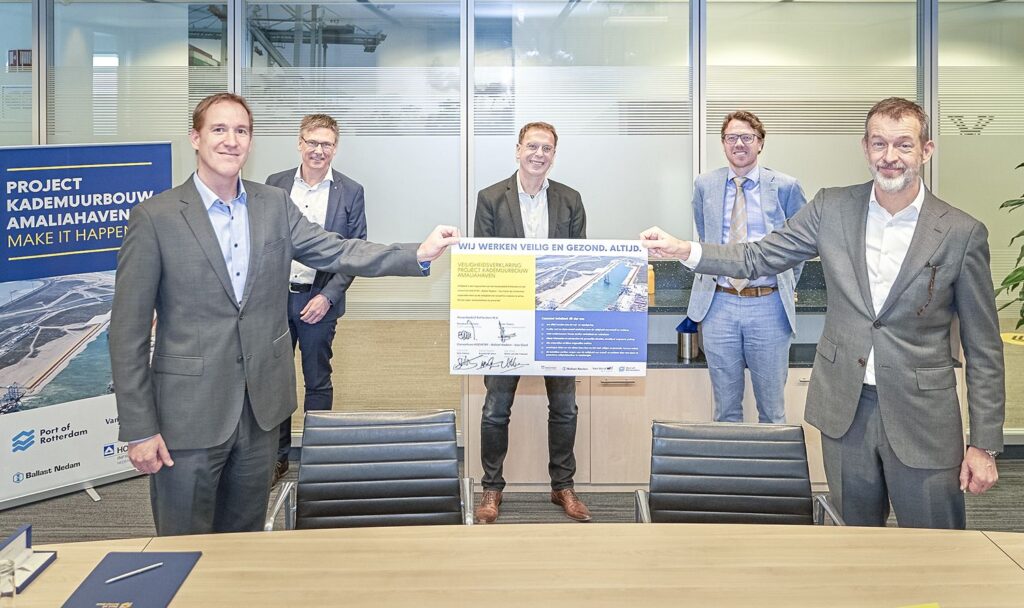