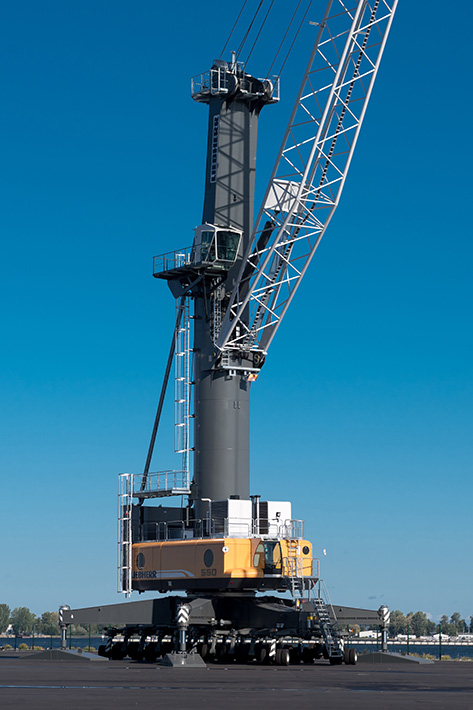 The LHM 550 is the most frequently sold model in the LHM portfolio with more than 250 units delivered.

The Port of Grenaa relies on Liebherr Mobile Harbour Crane technology and is renewing its equipment. In order to have not only more efficient but also more ecological handling in the future, the Port of Grenaa decided to have a new electric drive built into the LHM 550. Liebherr’s customer service in Rostock, Germany, updates the equipment according to the customer’s wishes before shipping it to Denmark.

Grenaa is a port city on the Kattegat and forms the geographical centre of Denmark. The port of Grenaa is one of Denmark’s largest commercial and industrial ports. In October, the Port of Grenaa ordered a Liebherr mobile harbour crane type LHM 550.

As one of the existing cranes was no longer up to date, the port decided to upgrade its equipment and increase its performance with new mobile harbour crane technology. For this reason, the port authorities decided to purchase a Liebherr LHM 550 mobile harbour crane, which is by far the most frequently sold model in the LHM portfolio with more than 250 units delivered.

The demand for sustainable, environmentally sensitive operation and for low-emission cargo handling cranes is becoming increasingly important. Also, the Danish port of Grenaa wants to strengthen its green profile with the locally emission-free drive. Before the LHM 550, which was previously in service in Finland for three years, is delivered to the port of Grenaa, it is given an upgrade at Liebherr’s maritime headquarters in Rostock, Germany. Here the LHM 550 will be fitted with an electric drive, which will significantly reduce future emissions when handling goods.

With its 54 metres long boom and a maximum lifting capacity of 144 tonnes, the LHM 550 covers a wide range of handling options. In addition to the hydrostatic drive, the mobility of the LHM is a decisive advantage for the customer. All wheel sets are individually steerable and have load balancing, whereby the ground pressure for each wheel does not exceed six tonnes. Furthermore, the 360° mobility ensures highest maneuverability. This is a decisive advantage at all quays and terminals.

The port of Grenaa has a history of more than 200 years. It has grown from a fishing and ferry port. Over the years the port has broadened its work to bulk activities as well as project and stacking activities. The construction of the Anholt offshore wind farm in 2013 gave the port of Grenaa national and international recognition as a thoroughly proficient wind turbine port. This makes it one of Denmark’s leading industrial ports for wind turbine projects.