M-Kran decided to use their new CC 8800 Crawler crane from Demag even before it had been delivered to the Moscow based crane service provider. They could only start after it was delivered following three weeks and 80 truck runs from the Demag plant in Zweibrücken. It took another three weeks to assemble the crane on-site at the Kstovo oil refinery close to Nizhny Novgorod, 450km to the east of Moscow in winter conditions even though the weather conditions were milder than usual. Both transportation and assembly work were still affected by the challenging weather conditions. Two Demag service technicians from Germany provided support to the four, sometimes five, member M-Kran team in charge of assembling the crane with the help of a 350-tonne crawler crane. 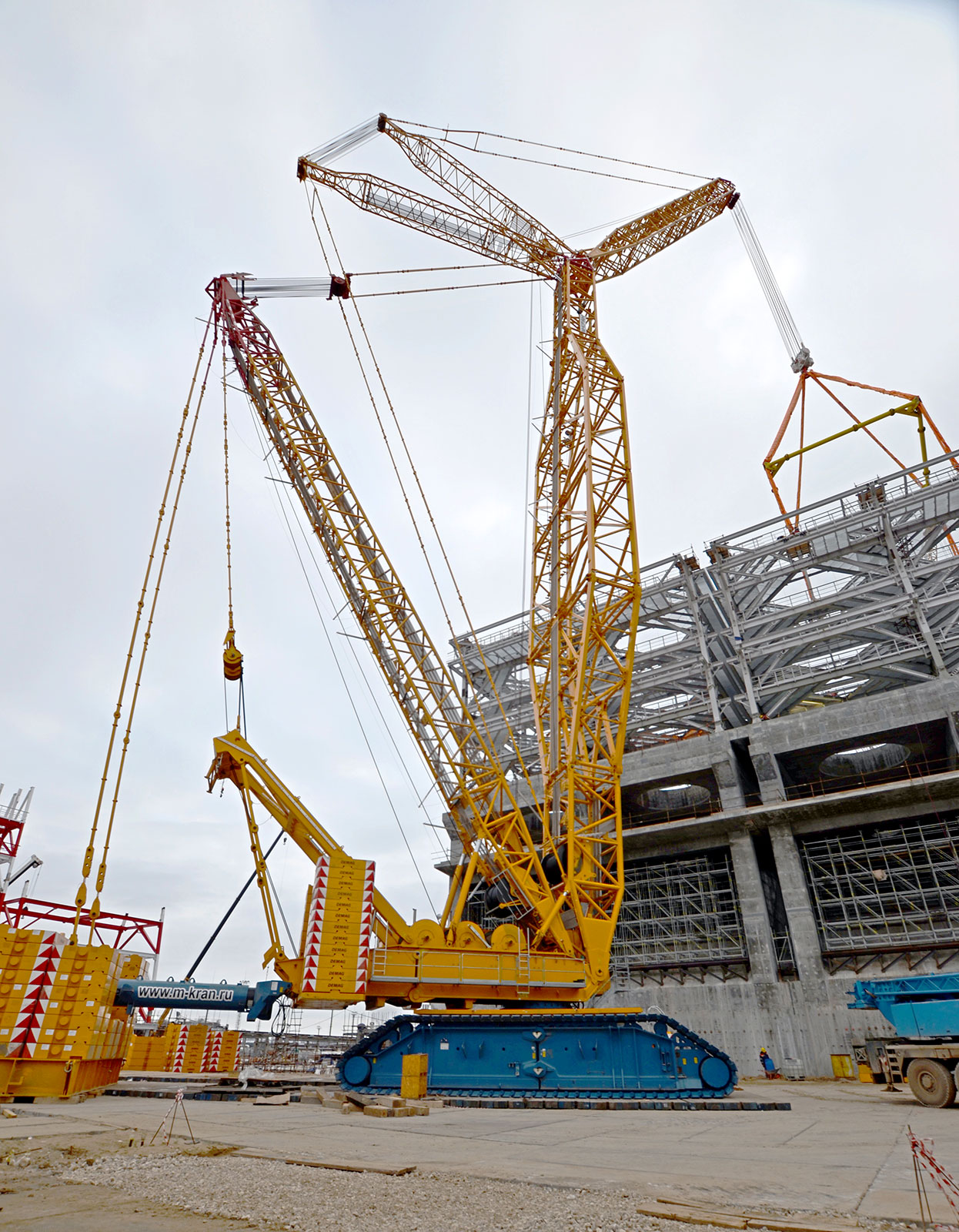 The company had decided on the Demag CC 8800-1 crawler crane for a variety of reasons, with two important ones being its enormous lifting capacity and its high reliability.

For the lifts, the CC 8800-1 was equipped with a Boom Booster with a BSWSL Superlift configuration, a 66-meter main boom with a 48-meter extension, and 295 tonnes of counterweight on the superstructure. The lifts were then carried out with additional Superlift counterweight of up to 520 tonnes. The Boom Booster Kit is designed to increase the main boom’s stiffness, increasing the already-impressive lifting capacity of the CC 8800-1 by up to a stunning 90 percent with certain configurations and making the CC 8800-1 superior to other cranes in the class of up to 2,000 tonnes. This makes the Boom Booster the ideal solution for heavy lifts, such as the ones that are required at oil refineries and for large infrastructure projects. The Boom Booster kit can either be ordered directly with a new crane or retrofitted as a kit for cranes that have already been delivered.

With the Boom Booster and the help of an assist crane, the CC 8800-1 was able to reliably tackle all the lifts on its schedule. The heaviest loads consisted of six steel supporting structures for the coke drums, each weighing between 200 and 400 tonnes. Meanwhile, the drums themselves came up to a massive 200 tonnes. In addition, the crane also had to lift other components that weighed less. Since some of the components had dimensions that were too big for road transport, they were first disassembled and delivered that way to the work site, where they were then pre-assembled on the ground so that they could be lifted. The lifts for the four coke drums followed the same basic pattern, with the exception that they had to be brought to a height of 65 meters and the last steel structure to a height of 88 meters. And this was one of the many occasions where the Demag CC 8800-1 truly shined: “We were simply amazed by how maneuverable and easy to operate the crane was despite its gigantic size. This meant that we were able to carry out all the lifts quickly and efficiently with it, and the general contractor confirmed how happy they were to work with the Demag CC 8800-1 and with M-Kran which is always a nice thing to hear,” says Managing Director Alexander Naumov while explaining just how impressed they were with the machine. 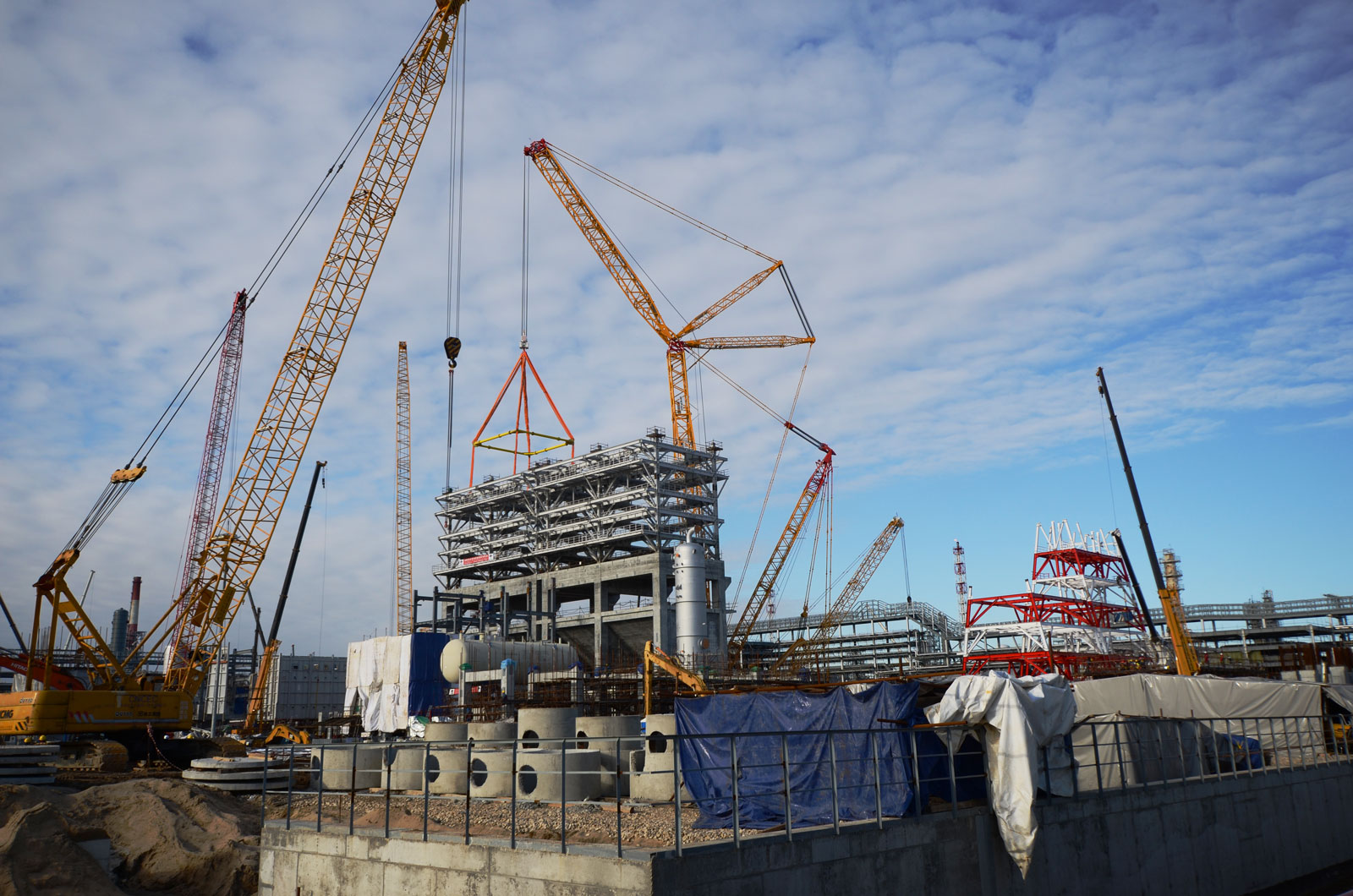 The CC 8800-1 spent a whole month at the work site as originally scheduled, and the demanding project was finished on time and to the full satisfaction of everyone involved. “The outstanding support provided by Demag played a crucial role in this and proved to be a huge advantage throughout this challenging job,” points out owner Ivan Mardar, who is already looking forward to many more years of working together.

Family shareholders Willi Liebherr and Sophie Albrecht hand over the LR 13000.
Titan-2 places its trust in the enormous lifting capacities of the LR 13000 .