It was not the job but accessing the site which posed a major challenge to crane contractor Movitram Grúas in Colombia. An LTM 1220-5.2 was required in the mountainous, forested coffee region to install a bridge. Movitram Grúas did everything it could possibly do to get the crane to the remote site. This included the Liebherr 220 tonne crane undergoing an eight kilometre river voyage on a barge on the Rio Cauca.

Movitram Grúas S.A.S. based in Pereira, Dosquebradas, Risaralda, Colombia, provides integrated solutions for hoisting and transport work in the coffee region of Colombia.

By water, land or air? The “Autopista pacífico 2” site, a motorway, tunnel and bridge construction project in the remote forested, high altitude coffee region of Colombia needed a 220 tonne mobile crane. But the only access route by land included a bridge which the crane could not cross due to its 72 tonne operating weight. Carlos Enrique Parra Ibagón, Managing Director of Movitram Grúas S.A.S, and his team carefully weighed up all the options. Finally, they decided to transport the LTM 1220-5.2 to the site by water. However, this required extensive calculations and safety precautions as well as obtaining a series of permits.

“First of all, it was a major challenge to get the crane on the water at all. There was no road, which meant we had to make several modifications to off-road routes”, explains Parra. The correct timing, taking into account high and low water, was also extremely important for the project. Parra continues: “Precise levelling and perfect securing for the cargo were essential.

There has never been a job like this one. It was an extraordinary project.” After a journey time of three hours, the LTM 1220-5.2 finally reached the site undamaged. Low loaders transported the equipment and ballast weights. Once it had arrived at the site, the 220-tonne crane completed several jobs including erecting a tower crane and installing 25 reinforced concrete box channels, each weighing 20 tonnes.

Carlos Enrique Parra Ibagón was extremely satisfied: “Transporting the crane on the water has many benefits and there is a great deal of potential for it. In some cases, the distances are significantly shorter. The road network in Colombia is pretty poor and permits are expensive. Transporting cranes by water could take heavy haulage vehicles off the crumbling roads.” Colombia is currently investing in making its rivers navigable. The plan is to create better links between the production and consumer centres inside the country at places such as Bogotá, Medellín and the Coffee Triangle and the ports on the Caribbean coast. 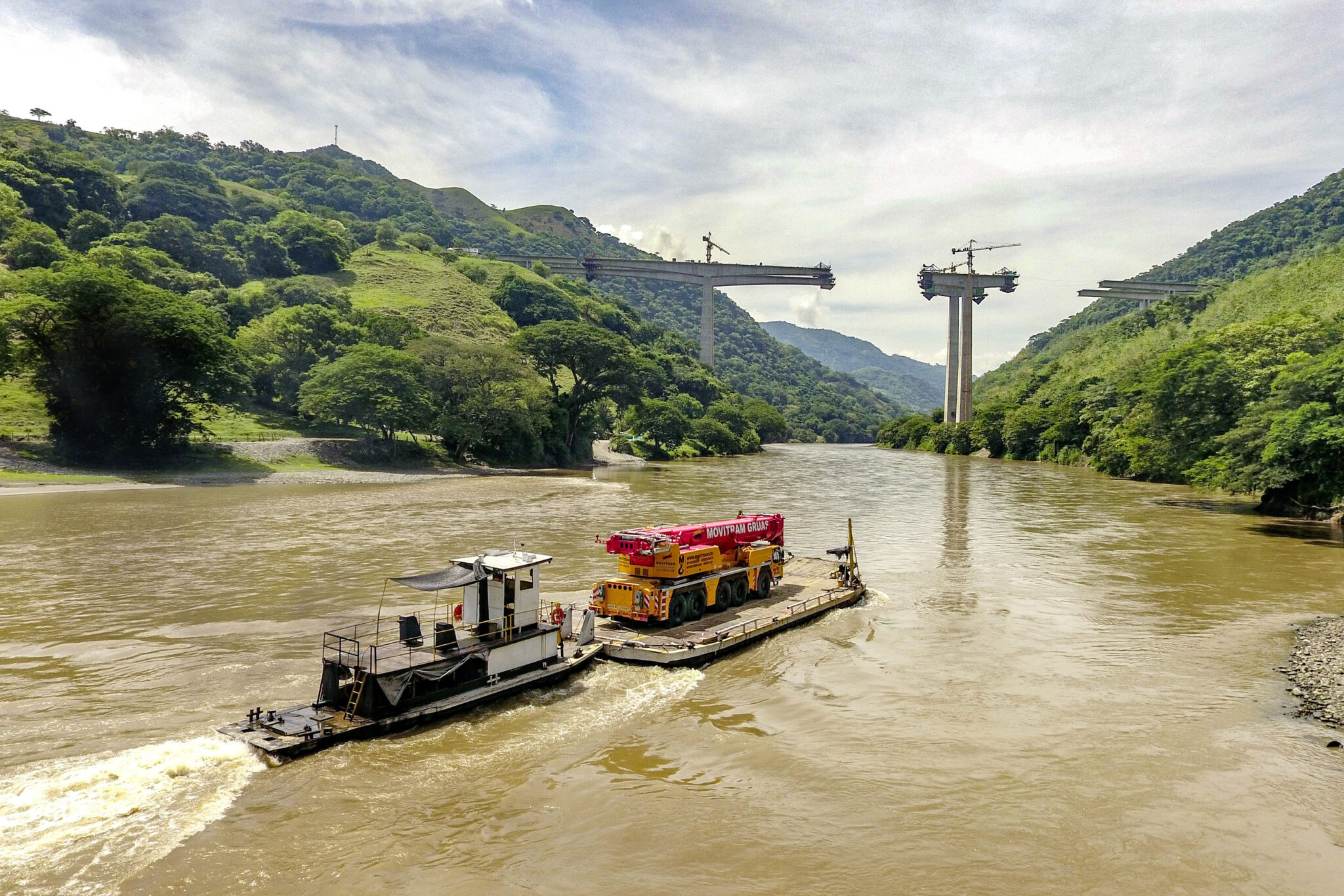 The site has extremely difficult access, which made the spectacular transport of the 220 tonne crane along the waterway necessary 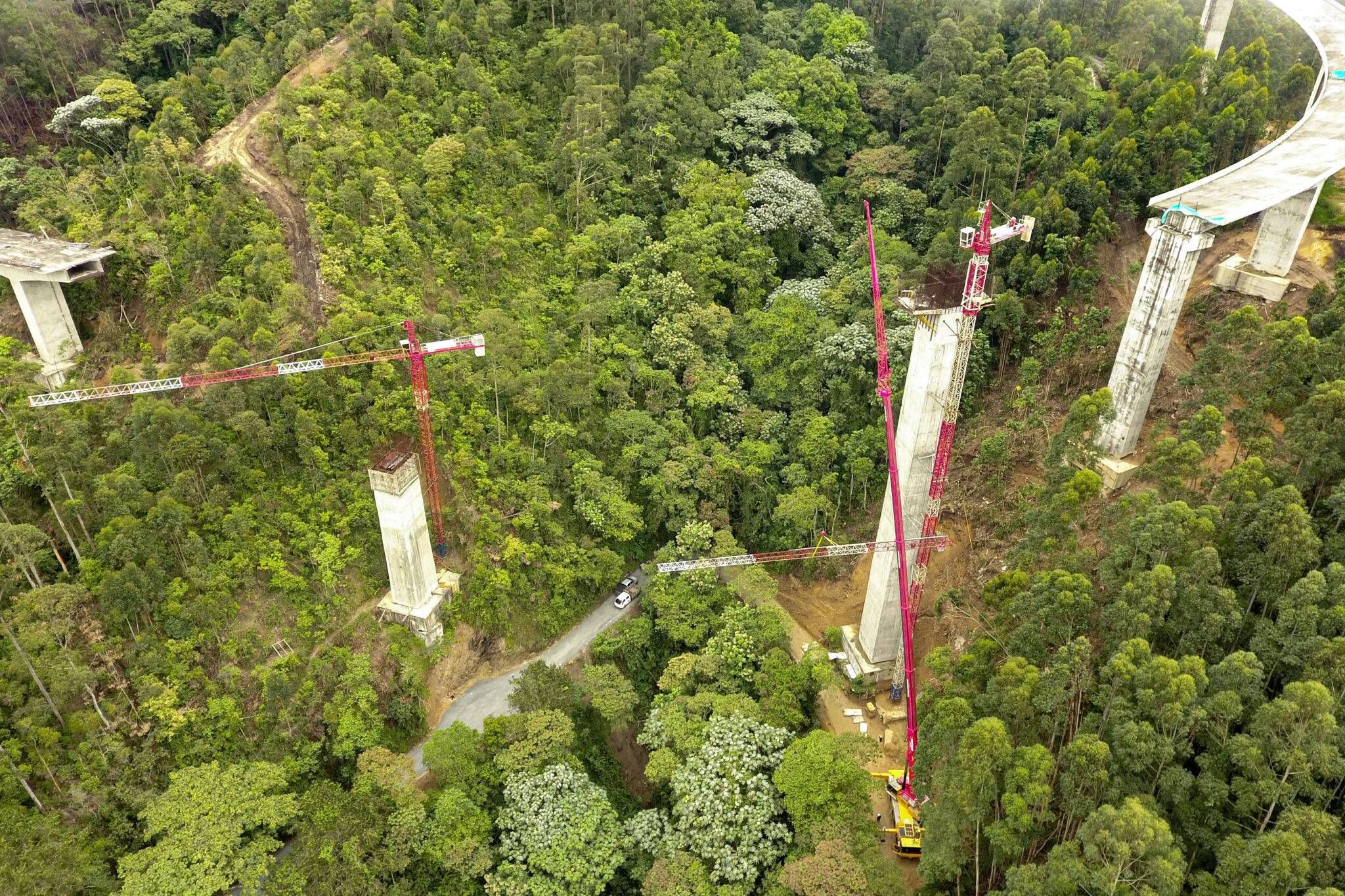 There at last – the LTM 1220-5.1 has reached the site and is shown here erecting a tower crane.

An exceptional project – the LTM 1220-5.1 from Movitram is floated on a barge eight kilometres
along the Rio Cauco in Colombia.