“What belongs together will grow together” was how Willy Brandt, the former German Chancellor described the fall of the Berlin Wall on 9 November 1989. Over 30 years later, another example of how the country is still growing together was played out in Berlin. By completing its very first job, the new Liebherr LR 1800-1.0 crawler crane owned by crane and heavy haulage contractor MaxiKraft played a major role in this process.

The new 800t crawler crane hoisted a new pedestrian and cycle bridge over the Berlin-Spandau Ship Canal to connect the previously divided neighbourhoods of Moabit and Mitte. The Golda-Meir-Steg, as the 78m bridge is called, was named after the former Israeli Prime Minister.

The steel bridge was built in Deggendorf and had to be transported 1600 km by barge using inland waterways to get it from Bavaria to Berlin. The enormous LR 1800-1.0 crawler crane hoisted the new bridge off the barge right on schedule on 22 October. It was then turned into position using rope and manpower before being lowered carefully by the crane.

The challenge for the MaxiKraft team was that there was very little space for the crane and its equipment at the site. That meant that the various components had to be delivered in precisely the correct order that they were required to set up the crane.

Another difficulty was the fact that the crawler crane had to be moved 10m back from the originally planned site so as not to damage or displace the pile foundations used to secure the bank of the canal and to build the abutment for the bridge. That meant it had to operate with an additional 10m radius to install the 195t bridge – 48m rather than the 38m, which had been calculated originally. Equipped with a 66 metre main boom, derrick system and suspended ballast with the V-frame, 70t of central ballast, 170t of slewing platform ballast and 380t of derrick ballast, the LR 1800-1.0 overcame this challenge with flying colours.

The V frame, a hydraulically adjustable ballast system which enables enormous adjustment distances with a ballast radius of between 14 and 23 metres, was once again worth its weight in gold for this job. It delivers maximum flexibility compared to the standard rigid system for large ballast radii. The derrick ballast had to be extended to the maximum radius of 23m to install the bridge. 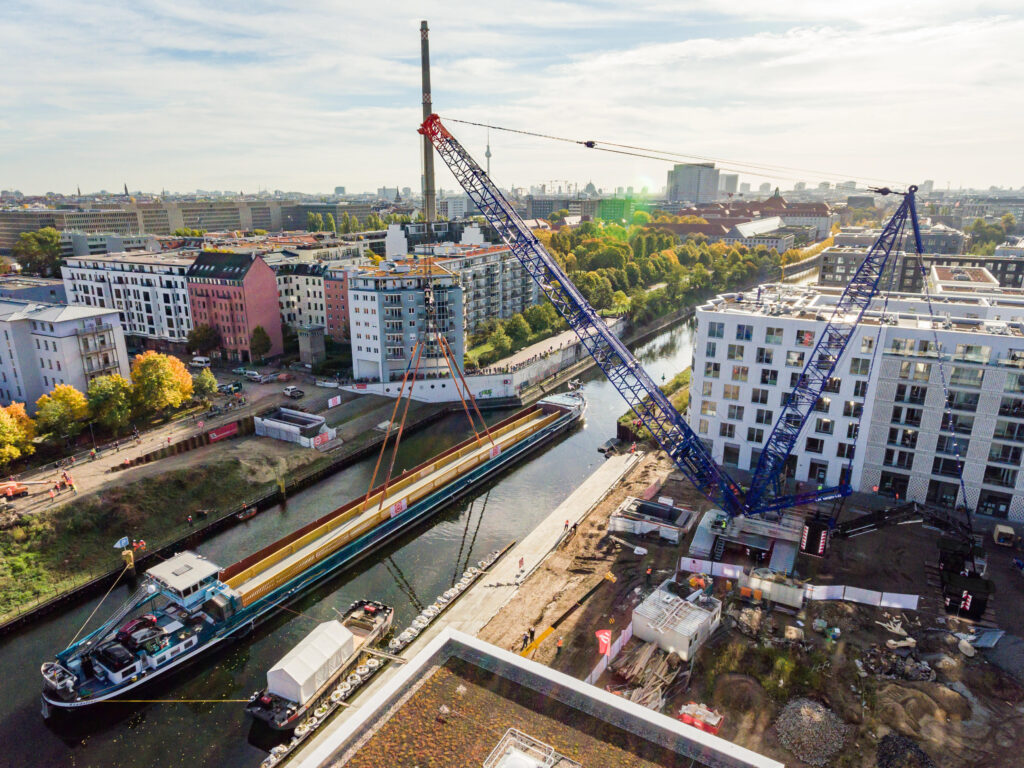 The new bridge was transported from Bavaria to Berlin over 1600 km by barge on inland waterways.

The V-frame adjusts the ballast radius quickly and flexibly between 14 and 23 metres.

Liebherr STS and RMG Cranes Ordered by Termont in Canada