ITER, “The Way” in Latin, is a landmark experiment to build the world’s largest tokamak, a magnetic fusion device designed to test the potential of fusion energy based on the same principle that powers our Sun and stars. Construction began in 2010 and is expected to be completed in 2025. This will be the first device of its kind, making it a significant and high-profile project. Mammoet was contracted by Daher Technologies for the heavy transport of numerous components, including the first two of 19 toroidal field coils required for the tokamak.

Daher Technologies is the lead logistics provider for ITER and is shipping these bespoke components from around the world to the ITER site. As the site is based inland, the route is over 100km from the nearest suitable port at Marseille. A solution was needed to efficiently transport some of the largest pieces, with the first coils weighing 430t each. The route would cross multiple highways so to minimize local disruption the transport operations had to be completed over just four nights each. 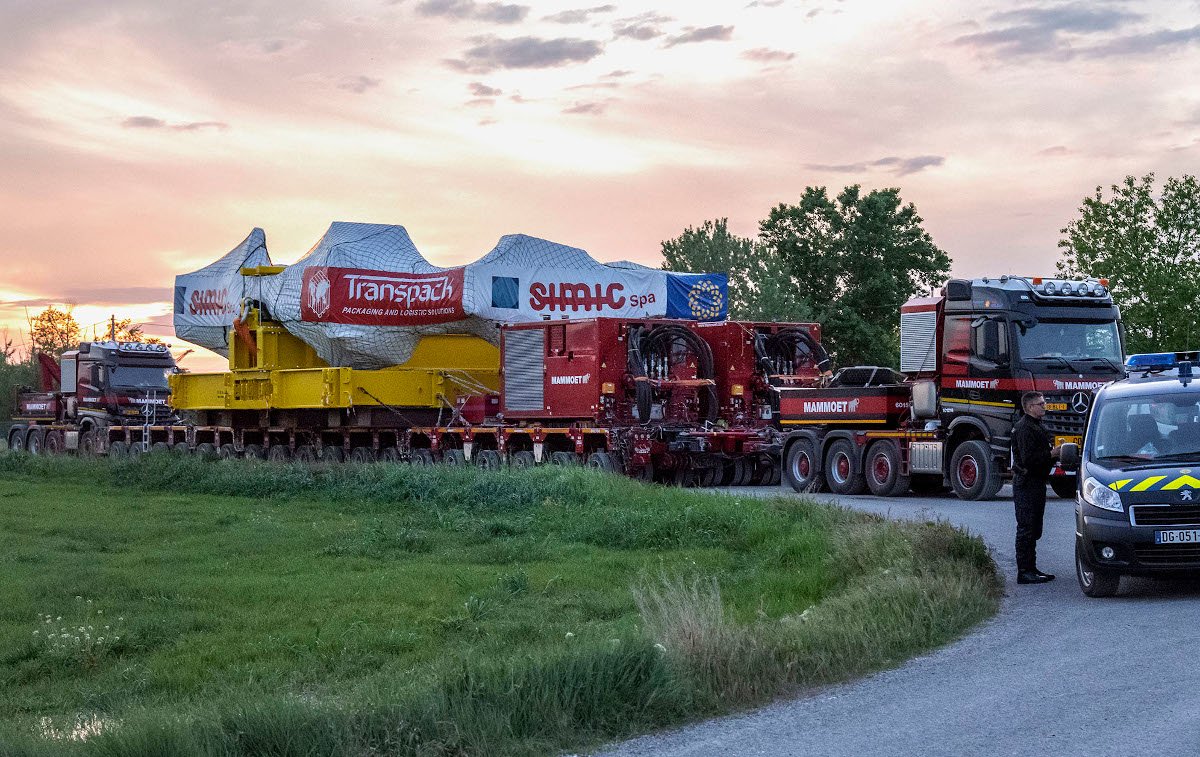 Mammoet’s solution was 2 x 18 axle line trailers, equipped with TPA, which is part of Mammoet’s Innovation Series. Having already demonstrated TPA’s strong capabilities on smaller-scale projects, Daher was assured that Mammoet could overcome the route’s challenges and meet the ITER project’s strict timeframe.

Detailed planning and preparations began more than ten years earlier, and Mammoet worked closely with both Daher and ITER stakeholders. Mammoet’s early involvement and local experience in France enabled them to support the French authorities to design the itinerary. Route surveys identified areas of the route that needed modifications and temporary roads and bridges were planned to support the heavy transport.

Initially, Mammoet was only contracted to transport the second coil, known as TF12, but was later also asked at short notice to perform the transport of the first coil, TF9. Mammoet’s advance planning for the TF12 transport ensured they were prepared. As well as mobilizing equipment quickly, Mammoet collaborated with Daher and local authorities to arrange road permits in time for the TF9 operation.

The increased pulling power of TPA meant Mammoet could complete the transports with two prime movers instead of six. The versatility of the powered trailer system also provided Mammoet with enhanced handling and, combined with the system’s maneuverability, enabled Mammoet to negotiate the crossing of highways, temporary roads and bridges, and 16 roundabouts. This was TPA’s first long-haul heavy transport and its efficient capabilities ultimately enabled Mammoet to complete the transports in half the time allowed.

Following these first two transport operations, Mammoet will be performing additional specialist transport services for the project in the coming months. This will include the movement of the first VV Sector, weighing 600t.

Video: Mammoet Focus set to change the rules and limits of the game