There are few more challenging environments to carry out large-scale maintenance and engineering work than inside a nuclear reactor building. These facilities, which can be decades old, were often designed and constructed with little regard given to the removal of their large and heavy internal components.

Adding further complexity is working in close proximity to nuclear power, which means that the steps required to carry out maintenance work have to be meticulously planned and can involve multiple parties from different organizations all working together.

These activities need to be carefully documented, in compliance with stringent regulations and standards – submitted in advance, approved and followed to the letter. Failing to do so in a careful and measured way can result in considerable penalties and significant safety risks.

Mammoet specializes in the safe and efficient movement of the world’s largest and heaviest objects, and provides engineering solutions to some of the world’s most specialist industries.

This is why Framatome approached Mammoet to assist with the removal and replacement of four steam generators from inside its nuclear power plants in France.

The first project in Flamanville FA1 has successfully been completed and has demonstrated the efficiency of the equipment and procedures designed for the work.

The project was led by a combination of Mammoet experts from France and from Mammoet’s main engineering offices in Schiedam, the Netherlands.

The main challenge was taking these generators out safely in one piece, which was necessary because of possible contamination. Also, if the steam generators were to be removed in one piece, it would mean a shorter downtime for the power plant.

For that purpose, the tasks of Mammoet were to design a method to safely lift each of the large and heavy steam generators from their cubicles; and carefully rotate and maneuver the steam generators into a position so that they could be skidded outside the reactor building for decommissioning. These steps would then be reversed for the installation of the new steam generators.

The main piece of equipment used for servicing and replacing parts inside a nuclear reactor building is the polar crane. However, because the steam generators could not be lifted by the polar crane alone, a specialist set of handling equipment had to be produced.

Olivier Vanesse, nuclear activities manager and Project Director from Mammoet France, explains the challenge the team faced, “The facilities and infrastructures inside the reactor buildings are such that you cannot simply make a basic tailing operation. You need to be able to steer the steam generator, you need it to rotate. There are a number of steps that need to happen in order to move each of them through the main hatch. So that’s a difficult operation.”

“The lifting and tailing operation for 1300MW nuclear units is very complex. This is due to the fact that each steam generator weighs 520t, and this is more than the capacity of the polar crane, which has been designed for the placing of each steam generator in two parts at the construction stage. Therefore, you need to use a support in the middle of the polar crane to ensure that during the tailing process it has enough capacity – constraints and deflections-wise.”

As no specialist handling equipment already existed that was capable of completing the task, work commenced on designing, prototyping, manufacturing and testing a new set; ensuring that it complied with the stringent technical and regulatory rules of EDF. 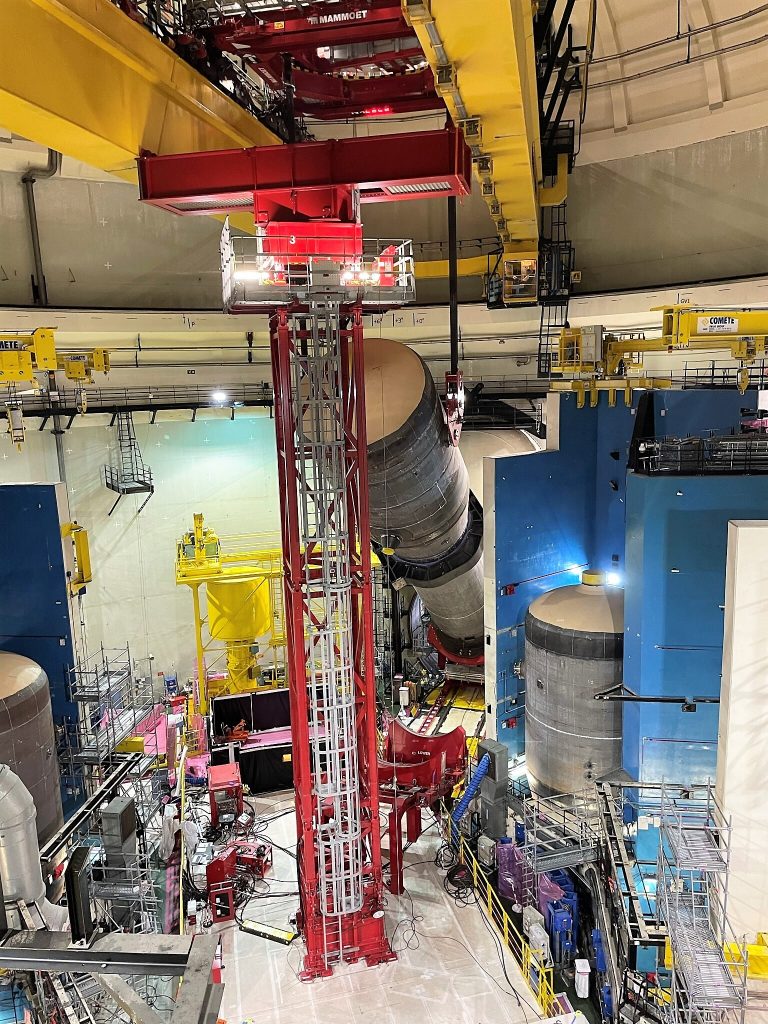 The supporting mast to reinforce the center of the polar crane

This set comprised four parts: a lifting trolley, installed on the polar crane, which would be used for lifting and tailing the steam generators; a supporting mast to reinforce the center of the polar crane; a device for down-ending and tailing the steam generators; and the saddles and skidding tracks used to maneuver the generators in and out of the reactor building.

To put into perspective how little room the team had to maneuver these colossal vessels inside the reactor building, the tolerances of space fell within hundreds of millimeters.

An important step in helping the team to understand this, and how to approach the design of the equipment, was the production of a 3D computer-rendered model of the inside of the reactor building. From this they were able to conduct investigations during the site walkdowns, determine the tolerances, and develop the design of the equipment and site execution procedures. 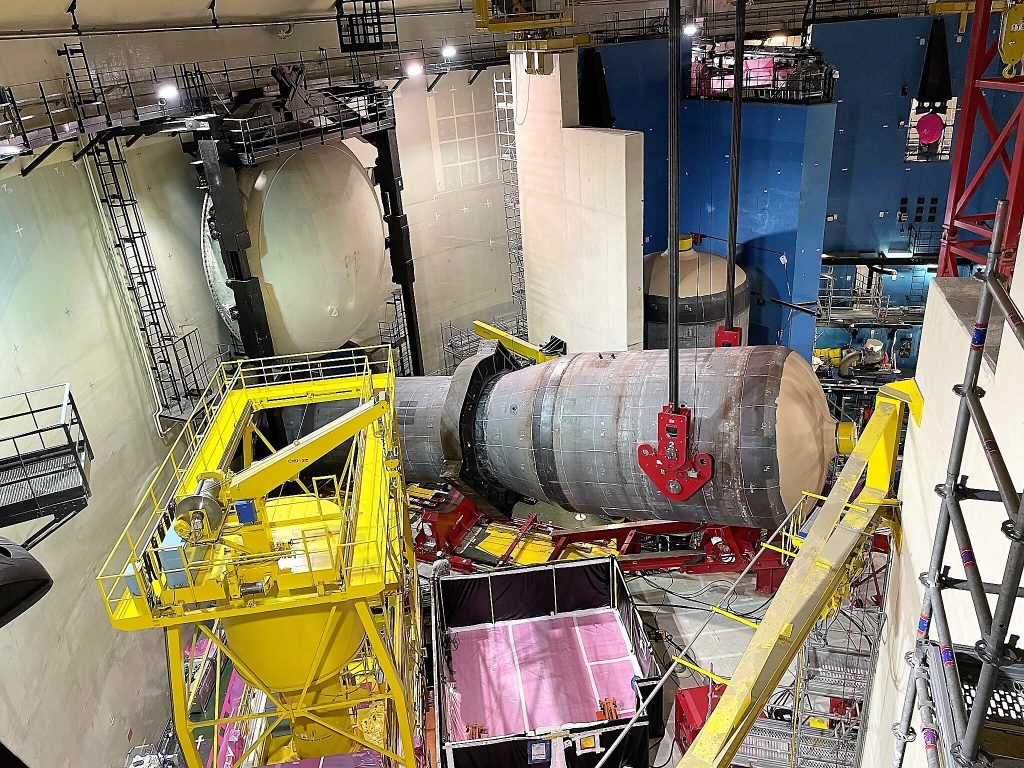 The steam generator being maneuvered out of the reactor building

Olivier adds, “The 3D scans were really useful to us and very accurate. We had scans, as well as high-resolution photos, and were able to make virtual visits to take measurements and see the equipment going inside the reactor building. It was really interesting for us to have this tool at our disposal.”

The data gathered would inform the project’s site execution studies, which covered everything from the operating procedures and traceability of each step of the project, to the modifications of the polar cranes to ensure that their operation remained in accordance with French regulations. This raised levels of safety across the entire operation, as the work was rehearsed hundreds of times before any equipment ever went to site.

As a result of this successful project, Framatome now has a set of equipment and a method to safely and efficiently replace steam generators for this type of 1300MW unit. Mammoet has succeeded in designing and manufacturing a set of specialist handling equipment that until now didn’t exist and is able to carry out this very complex and specific type of outage. Having proven that it works well, this equipment will now be utilized for the next maintenance operations on 1300MW nuclear units in France.

A lifting trolley, installed on the polar crane, which was used for lifting and tailing the steam generator