Following a remarkable three-night journey, Mammoet has successfully transported a Boeing 747-400 from Schiphol Airport to its final resting place in the garden of the Corendon Village Hotel in Amsterdam.

Placed on 48 axle lines of Mammoet’s SPMTs, the 160-ton giant embarked on a 12.5 kilometer obstacle course, navigating its way through farm fields, over 17 ditches, around 18 bends, and across a provincial road and the busy eight-lane A9 highway.

Until several months ago, the former KLM Boeing 747-400 ‘City of Bangkok’ was a complete working plane. Mammoet’s solution involved fitting strengthening supports to the airplane then raising it over 1.8 meters by hydraulic jacks onto a self-propelled trailer (SPMT). This solution involved less risk and complexity than, for example, lifting the airplane by crane. It also meant the airplane would not be touched – which was a concern as it had just been resprayed in Corendon colors.

Over 6,000 aviation fans and interested public turned out to watch the journey, which commenced on the night of Tuesday 5 February. Moving at a speed of 5km/hour, the airplane left its hangar at Schiphol Airport and headed along one of the runways. It then traveled eight kilometers overland and was parked for two days while Mammoet repositioned the road plates for the second stage of the journey.

More than 2,100 stabilizing steel road plates and 1,250 wooden bulkheads were used to prepare the cross-country route for the 160-ton airplane and transport equipment. Once used, road plates and other materials were removed and repositioned for the next step of the journey.

On the night of Friday 8 February, the Boeing became the first aircraft to cross the highway A9 by land. Guardrails and lampposts were removed and traffic was brought to a standstill so the airplane could cross the eight lane highway, before continuing for 4.5 kilometers across fields to the road opposite of the final destination. Then, on the night of Saturday 9 February, the aircraft took its place in the garden of the Corendon Village Hotel. With a wingspan of more than 60 meters, it took millimeter precision to position the 747, backwards, onto its foundation. A process which required 57 movements.

The 160-ton giant making its way through farmland

This is not the first time Mammoet has transported a ‘Jumbo Jet’, having drawn on its previous experience in 2004 moving a Boeing 747 from Schiphol Airport to the Aviodrome in Lelystad. However, as project manager, Maarten Hegeman, explains, this project had particular challenges.

“There were many different parties that we had to work closely with – Rijkswaterstaat (the public body responsible for water management), multiple municipalities, Schiphol Airport, residents, landowners and so on. Also, a great deal of preparatory work was required, particularly for traversing the ditches and roads. Furthermore, the aircraft could only be driven at night to minimize inconvenience to flights and traffic.” 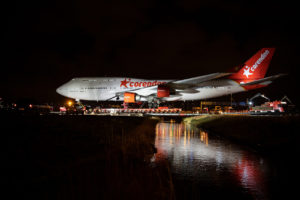 Crossing one of 17 ditches

Now situated right next to the Corendon Village Hotel, it is expected the airplane will be converted into a ‘Corendon Boeing 747 Experience’, an attraction which will eventually be open to the public.

Crossing the eight-lane A9 highway

Arriving at its final destination next to the Corendon Village Hotel

Mammoet’s revolutionary Trailer Power Assist (TPA), designed to improve transport efficiency, has been utilized for the first time in Norway.