Mammoet Brings the Roof Down 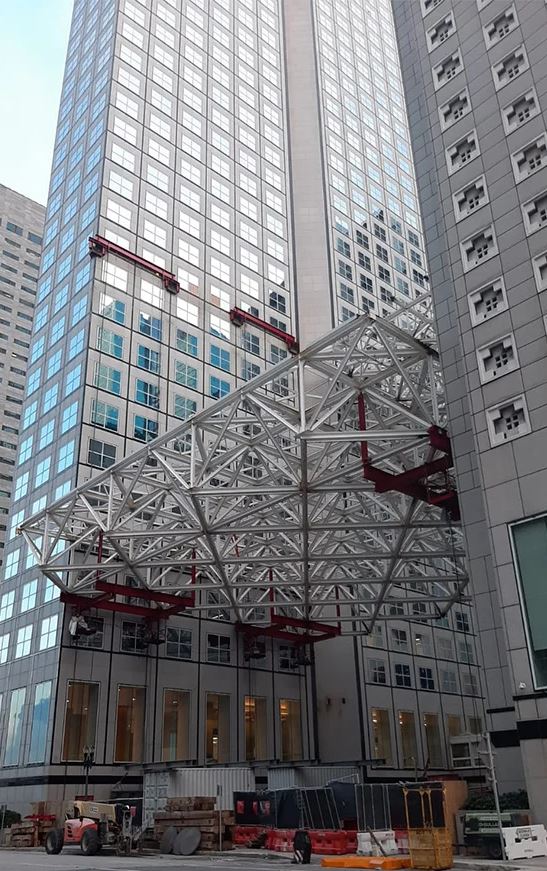 Mammoet’s crew has successfully lowered a 440t steel canopy which had been in place over the Southeast Financial Center Plaza in Miami, Florida. The aging canopy was lowered in two independent sections using eight hanging frames and was removed because it was beginning to show the initial signs of deterioration. The congested location made the use of cranes to remove the canopy impractical and expensive, especially since access to the site was only possible through the north side.

The use of a combination of equipment from Mammoet’s vast toolbox allowed for a solution that was not only efficient, but could also withstand the area’s frequent high winds, which had the potential to add significant delays to the project.

The large steel truss, measuring 73 meters long and 36.5 meters wide, was supported on 16 corbels between two buildings. Mammoet’s team assessed the situation and came up with a concept for removal using a gantry, strand jack and skidding system that would not only cause minimal disruption to the bustling downtown Miami location, but also maintain the integrity of the plaza below and its adjacent buildings.

To execute this approach, Mammoet installed a custom-engineered solution to cradle the canopy sections from below, using eight 70-ton strand jacks anchored to the buildings. Once in place, this system carefully maneuvered each of the two sections downward.

The first section weighed 205 tons and was lowered from its starting elevation of 53 meters to ground level where it was then dismantled. The second roof section, weighing 235 tons, was lowered onto Mammoet’s 40m long gantry, and skidded to the north over an existing pedestrian corridor, in order to be jacked down using the Mega Jack system and demolished in the same way.

Over the course of the four-month project, there were zero incidents. The project execution was carried out swiftly and in accordance with regulations put in place due to the COVID-19 pandemic.

On the evening of January 6th Mammoet began the transport for the giant splitter vessel. The vessel left Dacro Industries, where it was constructed, and began it’s 3 day transport journey from Edmonton to Fort Saskatchewan, AB.