The Akita Noshiro offshore wind farm, located off the coast of Japan, is the first large-scale offshore wind power project in Japan. As part of the project’s construction phase, Akita Offshore Wind Corporation required 33 monopiles to be upended on the deck of the offshore installation vessel so that they could be used for construction of Japan’s first large scale commercial wind farm project.

This was the first time SPMTs had been used for this type of operation in Japan, so strong engineering support from a global team experienced in offshore wind operations would be vital to ensure a safe operation. In particular, close monitoring of tolerances was required throughout, to ensure the SPMTs were not subjected to high levels of torsional load during these highly precise maneuvers.

The operations took place around 1km offshore between Ports of Akita and Noshiro, Japan with main marshalling station in Akita. The 33 monopiles needed to be upended one by one from their horizontal orientation on the deck of the installation vessel.

As each monopile was larger than the deck of the vessel, there was a need for the upending operation to stop and have the crane slew (rotate) 180 degrees. Mammoet’s engineers had planned well in advance for this phase. To ensure a safe maneuver, it was necessary to minimize the risk of torsion.

The team used steering modes that are not in everyday use, allowing the trailers to be put into carousel mode; free-wheeling to follow the motion of the crane above – to which the monopile was still attached. This phase was executed safely and successfully.

During this phase, our customer’s surveyors were on board to monitor the position of the crane hook in real time to reduce the risk of the crane hook being out of level. Each time, the SPMT was driven forward while the crane was hoisted up until each monopile was free from its upending bucket.

The operations were controlled closely in the final stages between crane and SPMT operators so that the monopile lifted out of the frame once it was almost vertical. Each monopile was then lowered via crane only into the water for sail-off to the installation site.

Mammoet’s global network provided the client with expertise and equipment from Japan, the wider APAC region, as well as the United Kingdom. This allowed our customer to benefit from the expertise behind some of the world’s most technically challenging offshore wind projects, but also a supplier that could mobilize resources locally.

The Akita Noshiro offshore wind farm project is expected to provide a total of over 140MW of energy a year. Its power will be supplied to approximately 130,000 homes, with commercial operation expected to start in 2022. 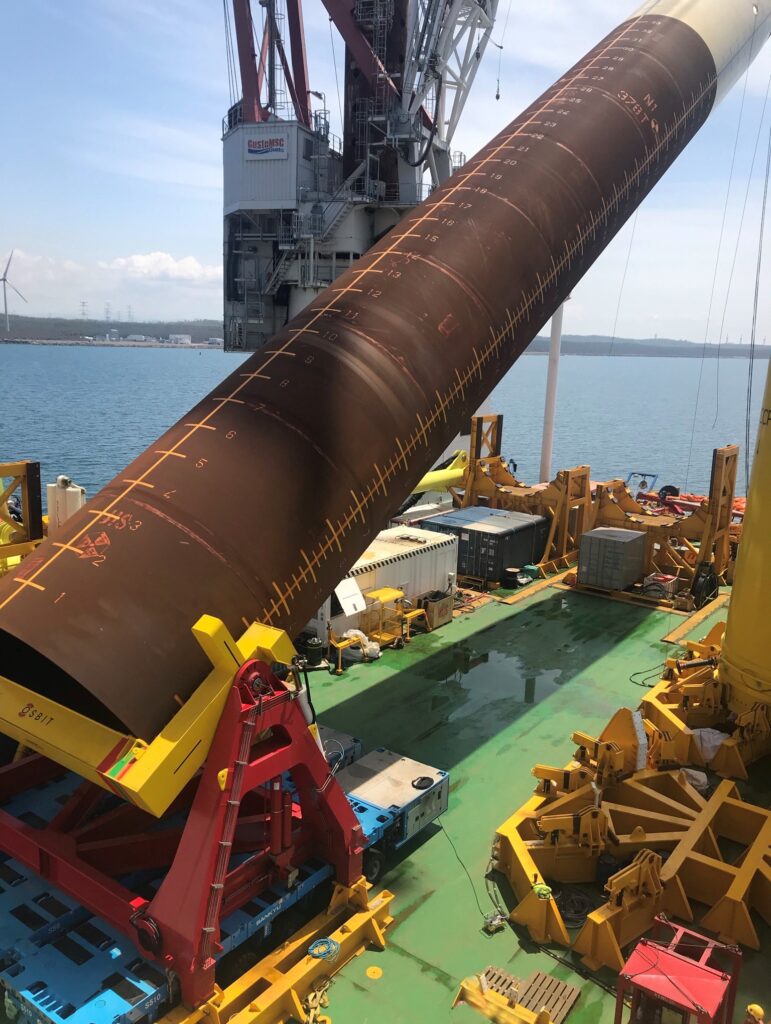 The team used steering modes that are not in everyday use, allowing the trailers to be put into carousel mode; free-wheeling to follow the motion of the crane above – to which the monopile was still attached. This phase was executed safely and successfully.