High lifting capacity values, an extremely long telescopic boom for its class and a series of innovative features such as VarioBase® and VarioBallast® – all these are combined on the new LTM 1230-5.1 mobile crane which has recently been launched by Liebherr. More and more of this new all-rounder from Ehingen can now be seen on construction sites. The new model made its debut at the customer days last year. That was when Wasel GmbH based in Bergheim near Cologne became one of the first companies to place an order for it. In fact, this large crane contractor and heavy haulage logistics company placed an order for two new cranes. One of the white and blue mobile cranes has been in action for the last few weeks erecting two new power lines. 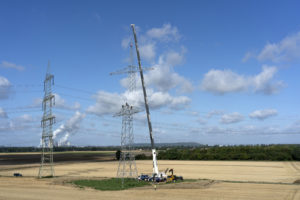 Its enormous telescope length of 75 metres made up the minds of those at Wasel GmbH to give the new mobile crane the task of erecting large electricity pylons for two new power lines with a total length of over 20 kilometres in North Rhine-Westphalia. The LTM 1230-5.1 has a compact design and its five axles mean that it only requires a small area on the ground to set it up, whilst it can nevertheless deliver enough lifting capacity and adequate hook height to erect the pylons which measure up to 93 metres in height. “The long telescopic boom on the crane is enough to assemble structures up to 70 metres high”, says Julian Schmidt, the Technical Manager at Wasel responsible for both projects.

The short set-up times required for the LTM 1230-5.1 mean that two of the smaller pylons up to 66 metres in height can be erected per day. The 20 metre lattice fly jib is then also used to erect the larger pylons. A fixed fly jib 43 metres in length is also available for the mobile crane. This enables the crane to reach an impressive hoist height of 111 metres.

Schmidt is extremely satisfied with the two new additions to the company’s fleet. “This crane enables us to access heights without any major accessories where other cranes would require lattice jibs. The crane has quite simply incredible lifting capacity values on its long boom. It is also excellent for operating with the short boom. That makes it extremely flexible and versatile for us. We also use the two new mobile cranes to erect tower cranes and also in the petrochemicals industry. VarioBase® and VarioBallast® are therefore very useful in slightly narrower plants.”

Crane operator Markus Götzen is also very happy with his new tool. “The crane is fantastic to drive on the road”, says Götzen, full of praise for the handling of the LTM 1230-5.1. “And the single-engine system works perfectly. In fact, I can’t think of anything on the crane to complain about.”