A new Liebherr LTM 1650-8.1 met up with its predecessor, the LTM 1500-8.1 (over 600 of which were manufactured) recently to load an enormous column in the River Rhine port of Andernach. Together, the two 8-axle cranes placed the 43m steel cylinder on a barge. 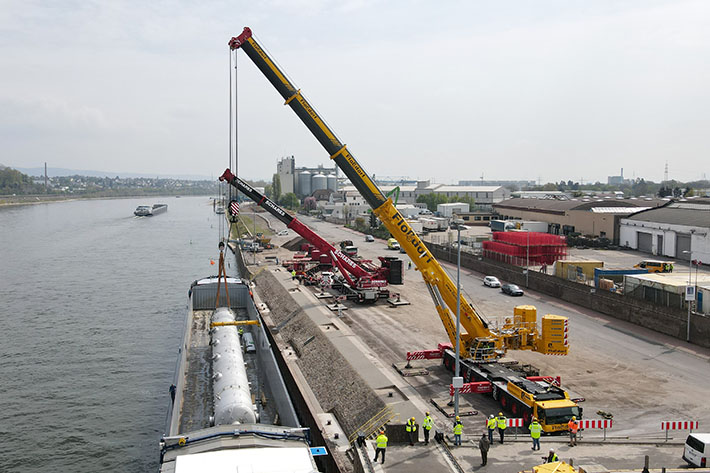 Clear advantage – VarioBallast®. With an identical load case, the modern LTM 1650-8.1 requires exactly 40t less slewing platform ballast than its predecessor (in the background) due to its adjustable ballast radius.

“Everything has gone like clockwork up to now.” Marco Flossdorf, Managing Representative at Dietmar Flossdorf GmbH & Co. KG sums it up perfectly. The crane contractor based in Bad Neuenahr has now been working with its new LTM 1650-8.1 mobile crane for over three months. “Since then, we have used our new Liebherr mobile crane for bridge building, in refineries and to erect large silos,” says Flossdorf. For several weeks, the powerful mobile crane has been working at wind farms in East Germany, dismantling wind turbines. “It’s a powerful crane and really versatile. It makes us very flexible,” says a delighted Flossdorf. The company’s steadily growing fleet now comprises around 20 cranes. In addition to the new large crane, an LTM 1110-5.1 was also purchased from the Liebherr Plant in Ehingen. Marco Flossdorf: “We are adding two more at the end of the year. From Liebherr, of course.”

At the end of May the heavy load experts at Flossdorf received an order to load an enormous CO2 washer, a column over 40m in length, onto a barge at Andernach am Rhein. Another crane was required to handle the 140t load. Working with the LTM 1500-8.1 from Autokrane Schares GmbH meant that the predecessor and successor of this crane class from Liebherr were working together on the quayside. The 500t crane has been in production for over twenty years. The very final model left the production line at the factory in Ehingen during the last few days. With over 600 units, the LTM 1500-8.1 is the most successful large crane in this class. 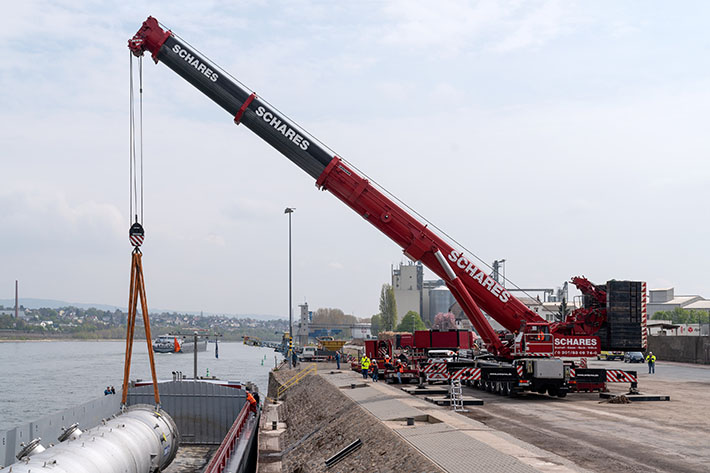 Legendary – more than 600 LTM 1500-8.1 mobile cranes have been manufactured by the Liebherr Plant in Ehingen over the course of the last 20 years. No other large crane in this class can match the success of this 500t model.

The two cranes managed the tandem job on the banks of the River Rhine in Andernach smoothly. During the job, the different quantities of slewing platform ballast made the technical progress made by the Liebherr crane developers very plain – for the gross load case of around 77t, which each of the cranes had to hoist at a radius of twenty metres, the LTM 1500-8.1 required ballast slabs with a gross weight of 165t on its slewing platform. Thorsten Mahlberg, the crane operator in the modern successor, set the ballast radius on his crane to its maximum distance using the hydraulic slewing mechanism, meaning that it only needed 125t of counterweight. That meant that 40t, in other words almost one-quarter of the ballast, did not have to be transported to the site at all. 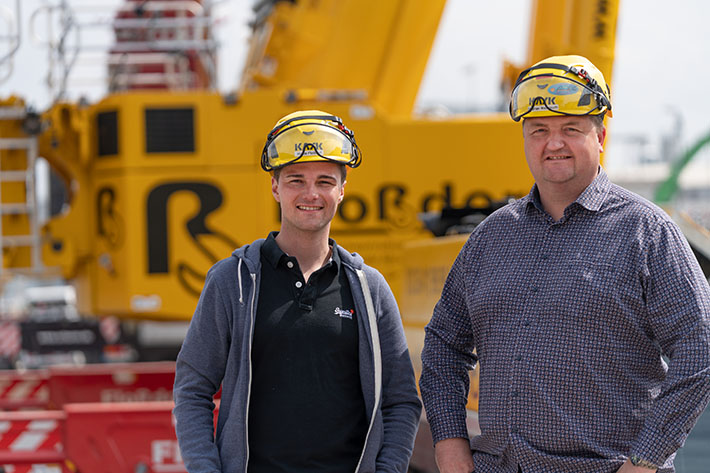 Job completed – Managing Representatives Marco Flossdorf and Stephan Wassmuth use the new LTM 1650-8.1, which they ordered with a full set of equipment, for a very wide range of jobs.

The imposing lifting capacities of the LTM 1650-8.1 catapult the performance parameters for many of its configurations upwards. On average, the new crane delivers an impressive 30 percent more lifting capacity than its predecessor and demonstrates its incredible power with its long boom which requires no guying in many settings – enabling it to increase the values by up to 70 percent. In many areas, the new crane, which is bursting with power, even matches the lifting capacity table values used by the nine-axle LTM 1750-9.1. This delivers very large logistical and monetary benefits for customers, as many jobs can be completed without the use of telescope guying.

Liebherr LTC 1050-3.1 lowered to get through Ehrenbreitstein Fortress

Liebherr STS and RMG Cranes Ordered by Termont in Canada

With over 400 Liebherr mobile cranes in its fleet, Al Faris places major order.