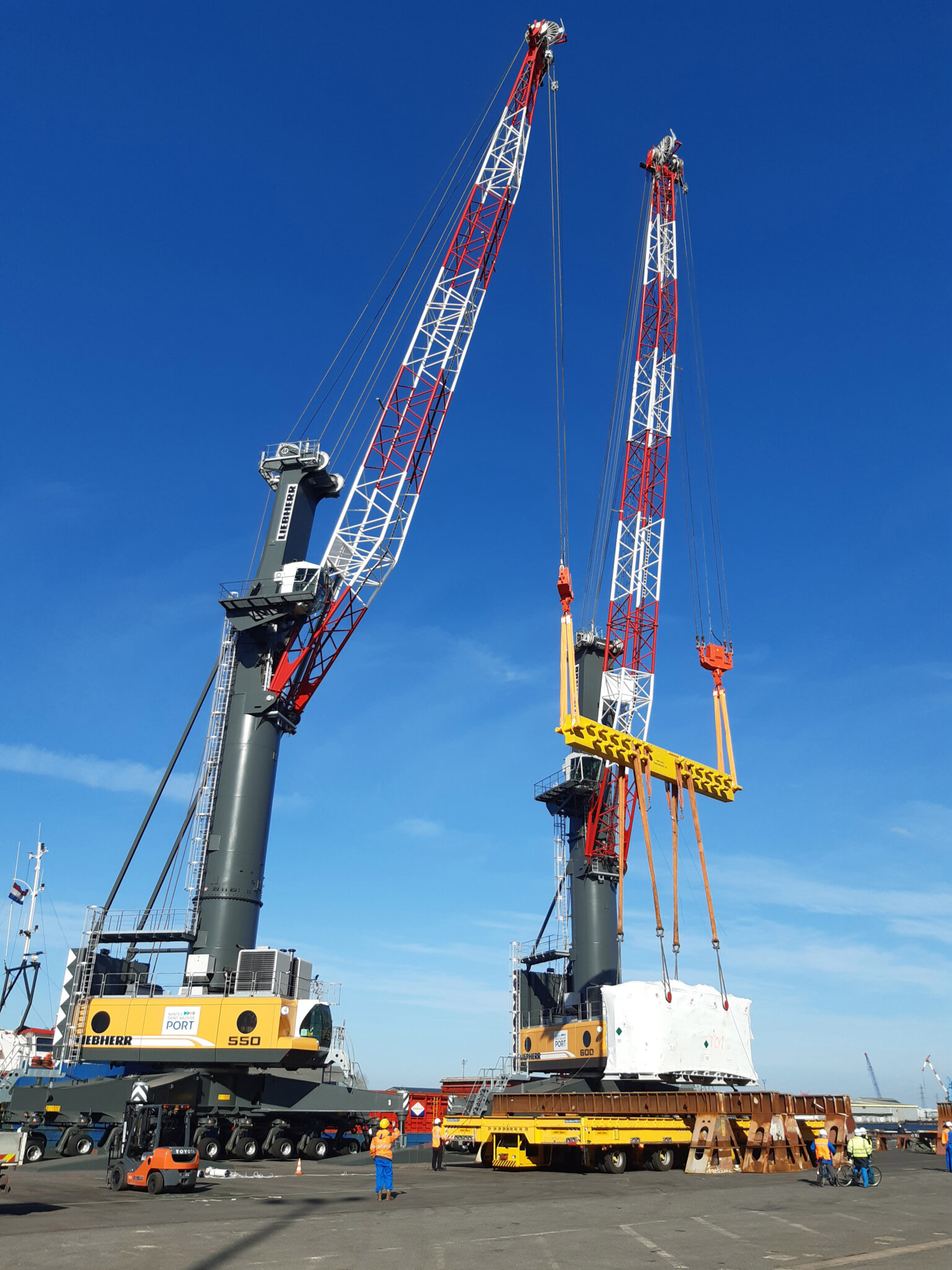 LHM 550 and 600 in tandem lift configuration

The Liebherr Sycratronic tandem lifting system is used in the growing onshore and offshore wind industry. Liebherr mobile harbour cranes equipped with Sycratronic are increasingly being used for long and heavy components such as rotor blades or turbines. Nantes Saint-Nazaire Port has also recently started using two new LHM 550 and LHM 600 mobile harbour cranes. Both machines are equipped with Sycratronic and will handle parts for an offshore wind farm under construction off the French coast.

The Sycratronic system improves the safety of tandem operation and makes it easier for terminal operators to increase their lifting capacities when combining two Liebherr mobile harbour cranes. While the system is developed to improve crane operations in all heavy-lift sectors, it is particularly useful in the on- and offshore wind industry where long components like rotor blades and heavy parts like wind turbines have become the norm. Tandem lifts are ideal for such applications and this is where Sycratronic comes in.

Nantes-Saint Nazaire Port is a new Liebherr customer. The terminal is modernising its old equipment with Liebherr mobile harbour crane technology. One of the most important criteria is the mobility of the machines and the ability to do tandem lifts. The terminal opted for an LHM 550 with up to 154 tonnes capacity and an LHM 600 with up to 208 tonnes maximum lifting capacity.

The two new cranes will handle offshore wind turbines parts and assemble them for the offshore wind farm “Parc du Banc de Guérande”. The new windfarm from General Electrics is located twelve kilometres off the Loire-Atlantique coast and is scheduled to become operational in 2022. The windfarm consists of 80 offshore wind turbines with six mega watts per unit and total of 480 mega volts. Wind turbine parts, rotor blades with a length of 75 metres, generators, and monopiles will be assembled and stored in Saint-Nazaire before shipment to Parc du Banc de Guérande in 2022.

“These new cranes meet our new needs related to the development of the marine renewable energy sector. The combination of the LHM 600 and LHM 550 cranes provides reliability and safety in the handling of XXL components such as masts or blades of offshore wind turbines,” explains Ludovic Bocquier, in charge of Energy Sector Business Unit at Nantes Saint-Nazaire Port.

The biggest benefits of Sycratronic are improved efficiency and increased safety. Due to its advanced algorithms and built-in safety systems, Sycratronic allows the crane driver to fully utilise the load curve of the cranes. Often, during tandem lifts, lifting capacity can be restricted by regulations to 75%. Sycratronic overcomes this, allowing the two cranes to be treated as one, and so the usable lift capacity of each crane can increase by 25%, a huge advantage. The system also improves safety. The Sycratronic system monitors possible shifts of the center of gravity of the load and automatically corrects to ensure the best stability. The biggest advantage however, is the elimination of human communication errors between two crane operators, which can result in accidents, especially during tandem lift operations.

Using a Controller Area Network (CAN bus), the Sycratronic system connects two cranes and enables their central processing units (CPU) to communicate with each other. This allows the leading machine to provide input like the slewing angle, hoisting height and the weight on the hook to the following machine. This means that the following crane does not just simply follow its leader. Movements are automatically calculated and implemented.

This makes it possible for one crane driver to operate both cranes simultaneously. In some circumstances, this may not be allowed for insurance reasons or national requirements. However companies can man the following machine with less experienced crane drivers, allowing them to use their experienced operators more efficiently.

TWD has designed transport and installation equipment for Wind Turbine Generator (WTG) components for over 20 offshore wind farms... Read on...

DEME to Deploy their DP3 Offshore Installation Vessel ‘Orion’ for 2,000t Monopiles on Arcadis Ost I