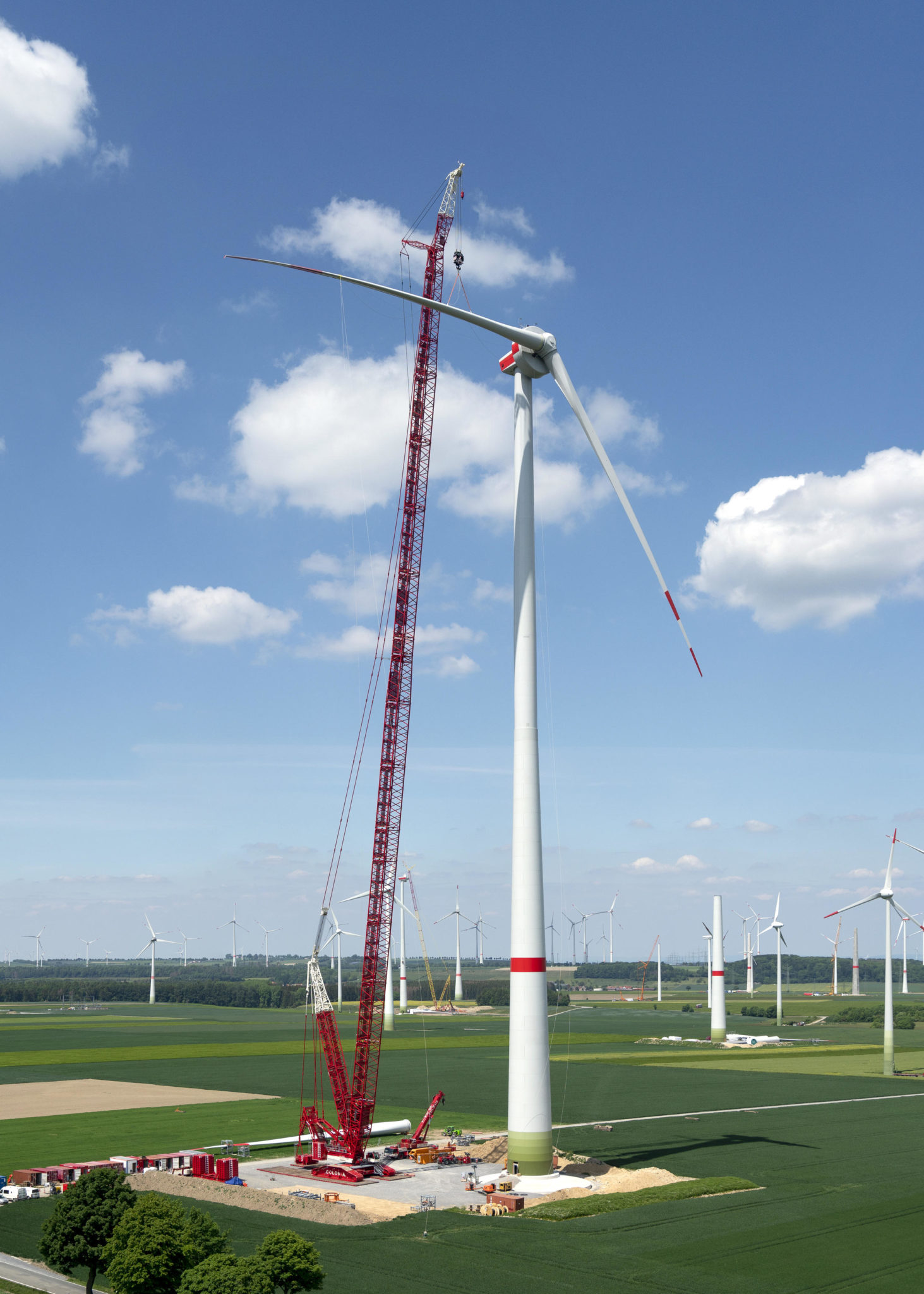 A dizzying height – the giant Enercon wind turbine has a hub height of 160 metres, a rotor diameter of 138 metres and can generate 4.2 megawatts of electricity.

The new Liebherr LR 1800-1.0 crawler crane gets up and going! The first ten units of this highly flexible crawler crane, which can be modified for lots of different sectors, have already been delivered to business partners in Spain, the USA and Asia. One of these powerful industrial cranes has also been delivered to Colonia Spezialfahrzeuge. The Cologne-based company mainly intended to use its new purchase in industry and plant construction as well as for bridge hoists. However, this modern crawler crane first had to tackle a job in a wind farm.

The LR 1800-1.0 is the logical development of Liebherr’s successful crawler crane technology and was first unveiled two years ago at the Customer Days in Ehingen before being presented to the general public at the Bauma in 2019. “We were looking for a crawler crane at the trade show in Munich because we wanted to broaden our range of services for the future from being a large rental company, but one which only rented telescopic cranes, by entering the large crawler crane market”, says Thomas Reuther, Sales Manager at Colonia Spezialfahrzeuge. “Although the LR 1800-1.0 was advertised as an industrial crane at the Bauma, the assurance given to us by the Liebherr people that it was also ideal for wind power equipment, convinced us to buy this 800-tonne crane. We believe that at the current time a crawler crane is rather dependent on orders from the wind power industry.”

And in actual fact, the first job for the brand new crane was in a large wind farm in North Rhine Westphalia, around 120 kilometres to the east of the Ruhr district metropolis of Essen. Around 70 vehicles transported the components for the wind power version of the machine to the site. Four towers from system manufacturer Enercon had already been erected by a Liebherr LTM 11200-9.1 mobile crane with heights of up to 88 metres and were now ready for completion.

When the new machine was erected for the first time, the team from Colonia received active support from three service personnel from Ehingen and the Liebherr repair centre in Oberhausen. After around six days, the LR 1800-1.0 towered into the air with a 171 metre main boom and a 12 metre jib. “As we get more familiar with the machine, our aim is to erect it within four days in the future”, says Reuther. To ensure this is possible, Liebherr has added a few extra valuable features to this crane model, whose components are designed for easy erection anyway. For example, the hydraulic erection support facility, which levels the central crawler section using the outrigger cylinders before the superstructure is added, is hydraulically controlled from the turntable. This means that it does not require a special unit for this purpose. The “quick connection” is also new. It enables the superstructure to be bolted to the central crawler section quickly and safely.

“We only required around seven hours to erect the basic machine for the first time”, says Wolfgang Winkler, showing his satisfaction with the set-up process. The handling and logical erection system for the new crawler crane impressed the crane operator from the very beginning, an important factor as he and his colleague Peter Severin are responsible for operating the new machine for Colonia. “It’s great that all the connections are bolted hydraulically during the erection process. In some cases, three sections of the boom package can be slid into each other, saving us both time and a great deal of transport capacity. But above all, the detachable ballast pallet saves an enormous amount of work”, says Winkler happily. “The 400 tonnes of derrick ballast are only required to raise the main boom. After this, we simply unbolt the centre pallet, with the remaining 80 tonnes of suspended ballast, plus the central and superstructure ballast being easily enough for the hoisting work. No restacking and no ballast addition or removal – that saves a massive amount of time.”

On the other hand, the two crane operators needed a great deal of time to erect the wind turbine itself. The wind and weather and the delays, which are not unusual when erecting a prototype turbine as in this case, mean that the crane operators’ patience is often tested to the limit. But the hoists themselves were completed impeccably. For the heaviest components of the wind turbine, whose hub is at an imposing height of 160 metres, the crane had to position gross loads of 89 tonnes at a dizzying height with absolute accuracy. The operators had to concentrate very hard and use a great deal of fingertip control. And the two men from Colonia demonstrated plenty of both in their comfortable cab. “To date, I have only ever operated telescopic cranes, so a crawler crane naturally takes a bit of getting used to and is also something of a challenge, says Wolfgang Winkler. “However, I found that operating the crane and its control system to be really very pleasant to work with. Even driving with load is such a smooth, quiet process that I sometimes had to check that it was actually working.”

Winkler, his colleague Peter Severin and their new crawler crane erected a total of four turbines in the extensive wind farm. What about afterwards? Sales Manager Thomas Reuther is very optimistic for the future: “We bought the full version of the crane, and in addition to the wind power equipment, we have various main boom versions and a set-up configuration with a luffing jib available. That enables us to carry out major industrial work or hoist bridges. The crane is one hundred percent variable and can be used in many different areas.” The Cologne-based company has a workforce of around 250 providing towing services, heavy haulage logistics and industrial installation work and often carries out work for customers in the petrochemical industry. In this sector, the crawler crane will significantly expand the range of services from the crane service provider in the future.

Wolfgang Winkler, who immediately volunteered to operate the new LR 1800-1.0, is extremely satisfied with his employer’s new purchase. “I have been a crane operator for a long time and I used to swear by a competitor’s crane”, he admits. “But since I have had the Liebherr, my eyes have been opened. I am absolutely delighted with Liebherr’s technology and extremely impressed.”

Two Liebherr mobile cranes were used for the set-up work. Here you can see the adjustment block for the derrick guying being positioned whilst the main boom is being assembled at the rear right.

Slimline – the basic machine is designed to have a transport width of just three metres. Here you can see the superstructure of Colonia Spezialfahrzeuge’s new LR 1800-1.0 arriving on site at the wind farm. 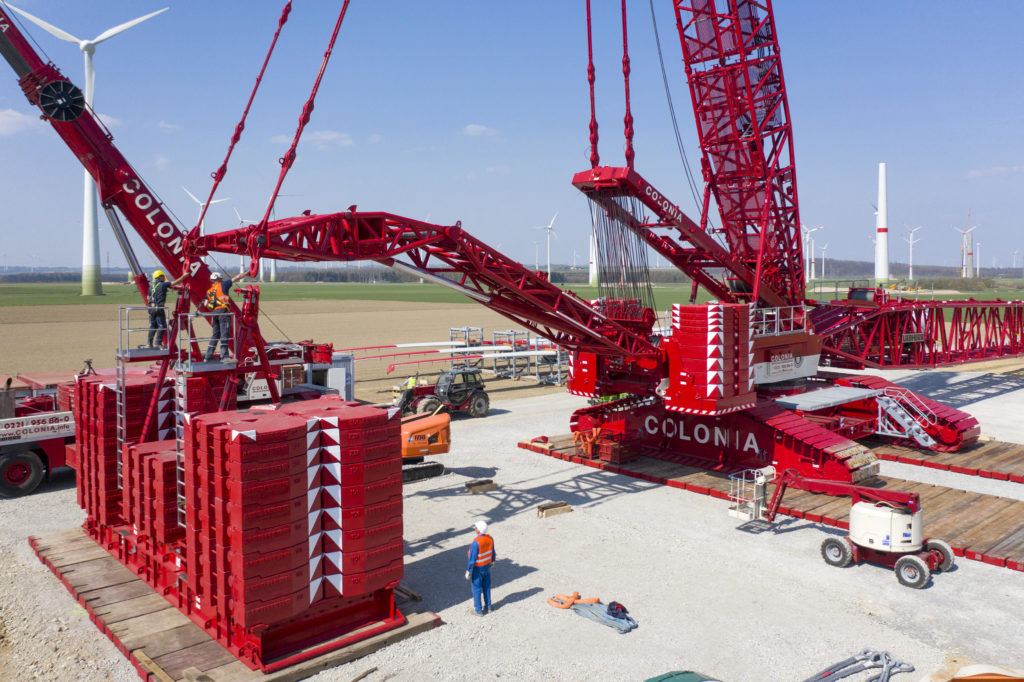 Heavy duty – 400 tonnes of suspended ballast is attached to the folding frame called the “V-Frame”, but is only required to raise and lower the massive lattice boom. 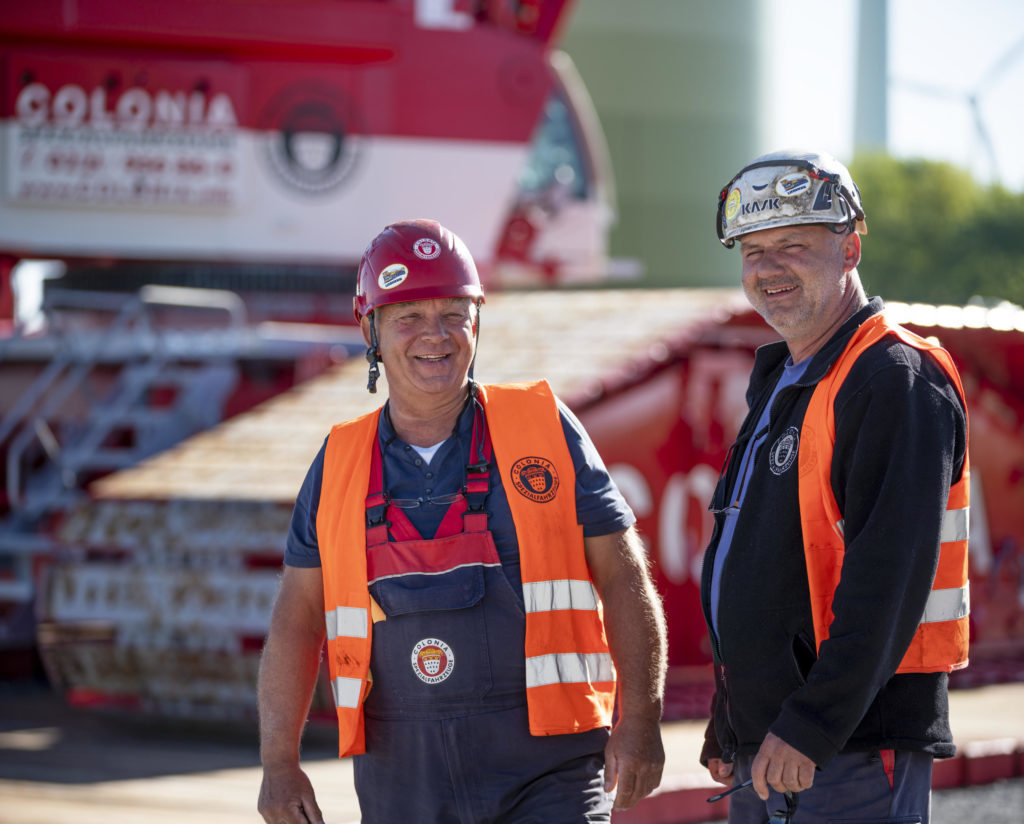 A relaxed team – Wolfgang Winkler and Peter Severin take turns in the cab of their new Liebherr crawler crane. 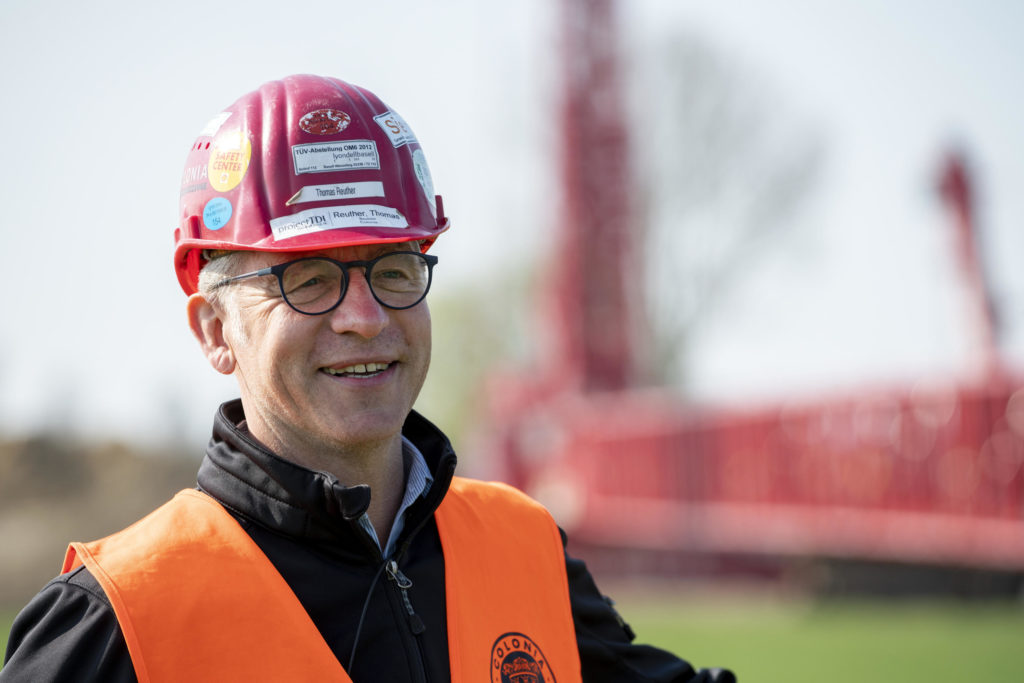 Confident – Colonia’s Sales Manager Thomas Reuther intends to use the crawler crane for bridge construction and in the petrochemicals industry, among other things.