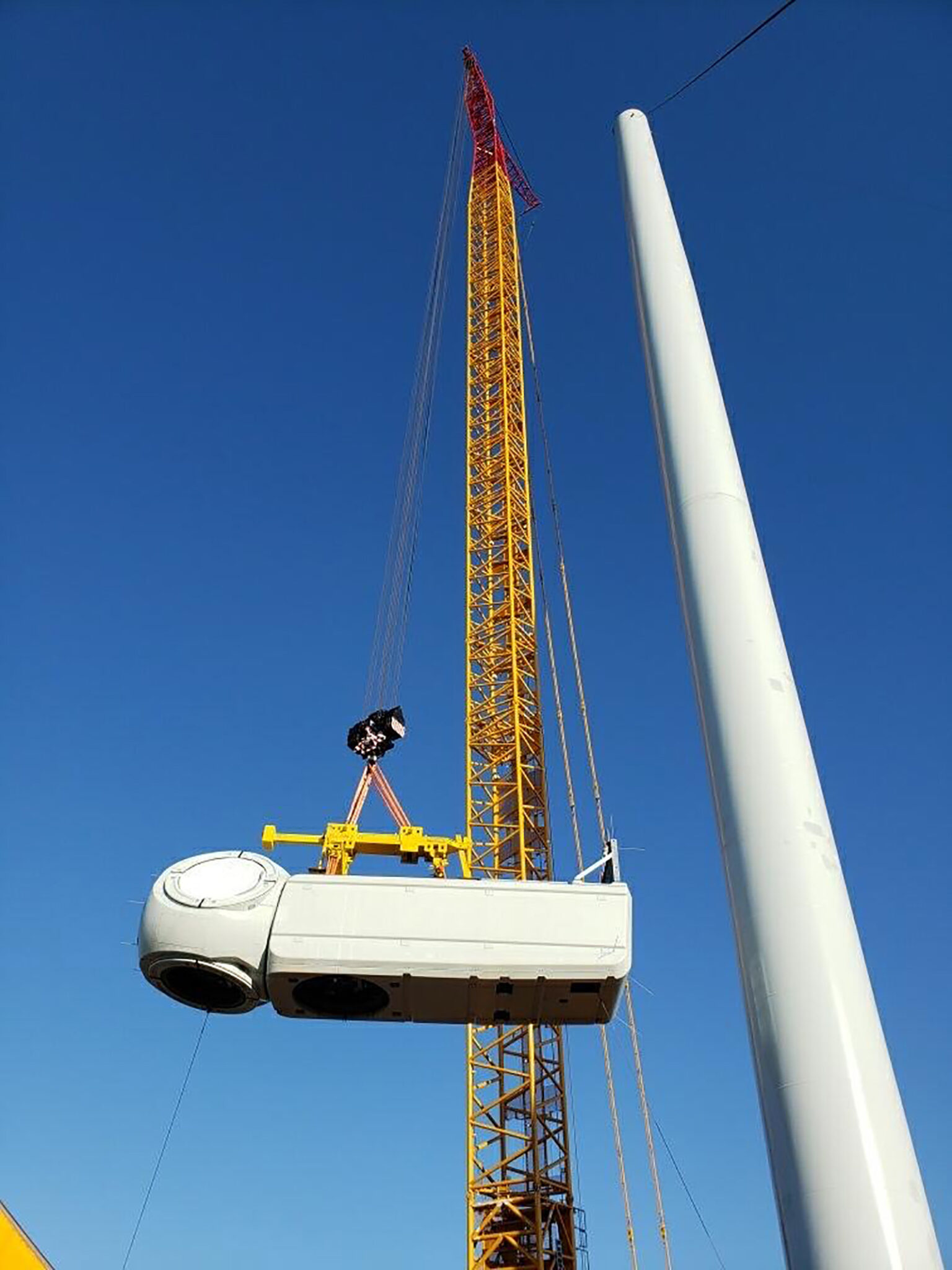 The Nordex Delta 4000 wind turbine with a rotor diameter of 149m is the latest generation onshore system in the four to five megawatts power class. In the past, three hoists were required to install the generator at its hub height of 108m – the nacelle, drivetrain and hub were hoisted separately and assembled at the top of the tower. American crane specialist Buckner Heavy Lift Cranes has now demonstrated that the work can be carried out more quickly, more easily and more economically – with one hoist rather than three.

The whole thing is made possible by the new, more powerful SL8F2 boom system, which Liebherr has developed in collaboration with Buckner for the LR 11000 crawler crane. This system is so powerful that it can hoist the completely assembled generator – the eighth version of the SL boom with the second version of the fixed F jib delivers a lifting capacity of 253t with a hook height of 114m, enough to hoist the 230t made up of the complete generator and load handling equipment up to the hub height of 108m. Another advantage is that assembling the nacelle with the drivetrain and hub on the ground is easier and safer than at high altitude.

The configuration of the LR 11000 with SL8F2 for modern wind turbines on towers around 100m high is particularly economical because the crane can operate without a derrick system. This saves crane contractors logistics work and set-up time because fewer parts must be transported and erected.

Buckner completed the first Nordex Delta 4000 generator to be installed with a single hoist at a wind farm in Northern Oklahoma in the centre of the United States. The LR 11000 was set up with the 108m SL boom and 12m fixed jib. 130t of central ballast, 250t of slewing platform ballast and a further 80t on the slewing platform extension provided the required stability to hoist the gross load of 230t to a hook height of 114m. This successful premiere will mean that this assembly process will now become standard procedure for this particular wind turbine. Five of 17 LR 11000 cranes, which Buckner is now operating in the USA, feature this new boom system.

Daniel Ives, Engineering Product Support & Analyst at Buckner, explains: “As we are convinced by the performance of the new SL8F2 system, we suggested to our customer, Wanzek Construction, Inc, and the owner of the wind farm, Duke Energy Corporation, that we should attempt to install the complete generator in a single hoist. As a result of the possible cost savings and the reduced risk posed by wind and weather, Nordex was then also quickly convinced to develop the load handling equipment for the job.”

Buckner used several Liebherr cranes for this wind farm project. LTR 1220 telescopic crawler cranes were responsible for unloading the components and assembling the nacelle, drivetrain and hub on the ground. Liebherr LR 1500 crawler cranes installed the bottom sections of the towers using a main boom system and were then converted to a luffing boom system to assist with the installation of the rotor blades. Two LR 11000 cranes installed the top tower sections and the generators. 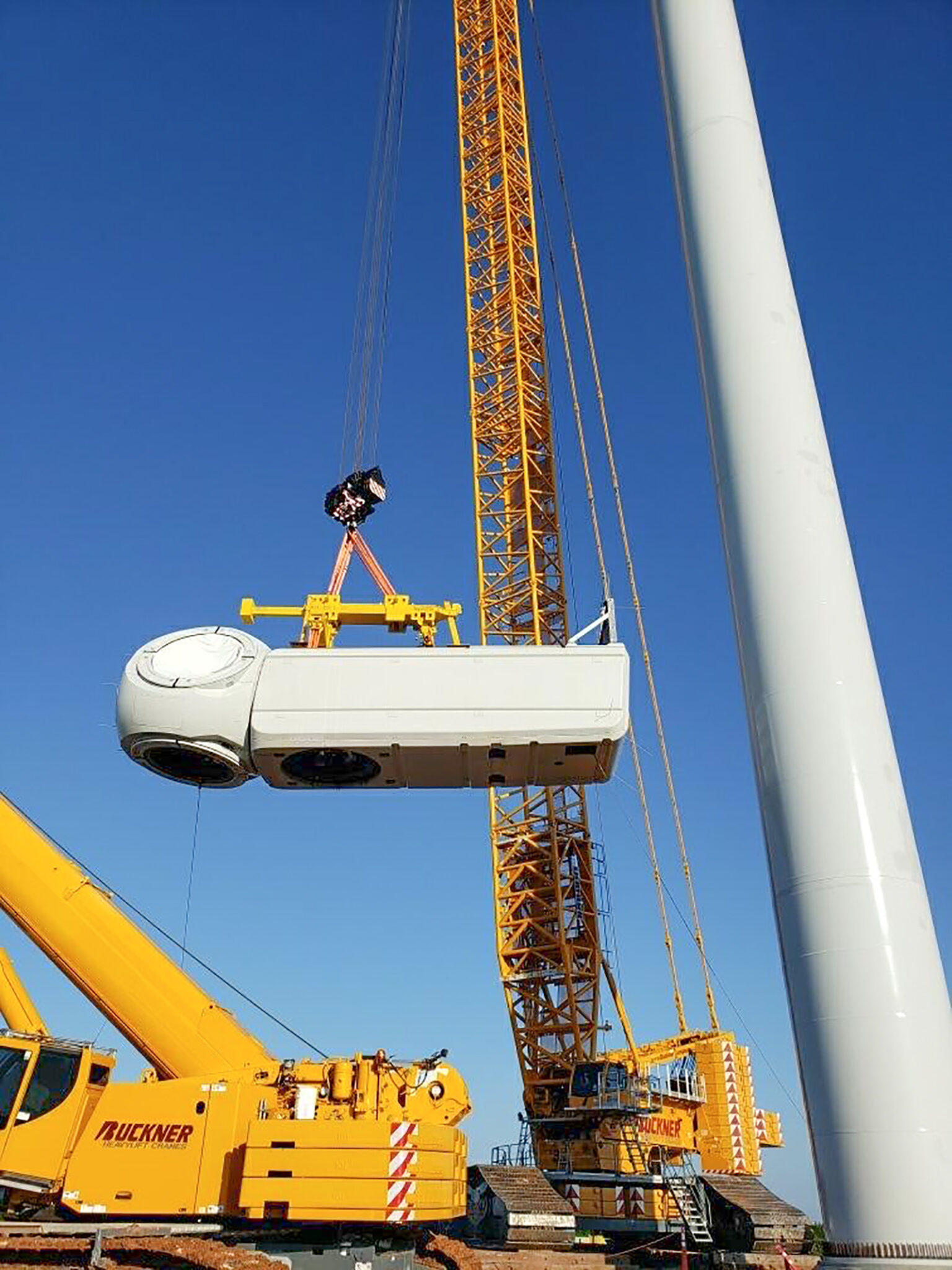