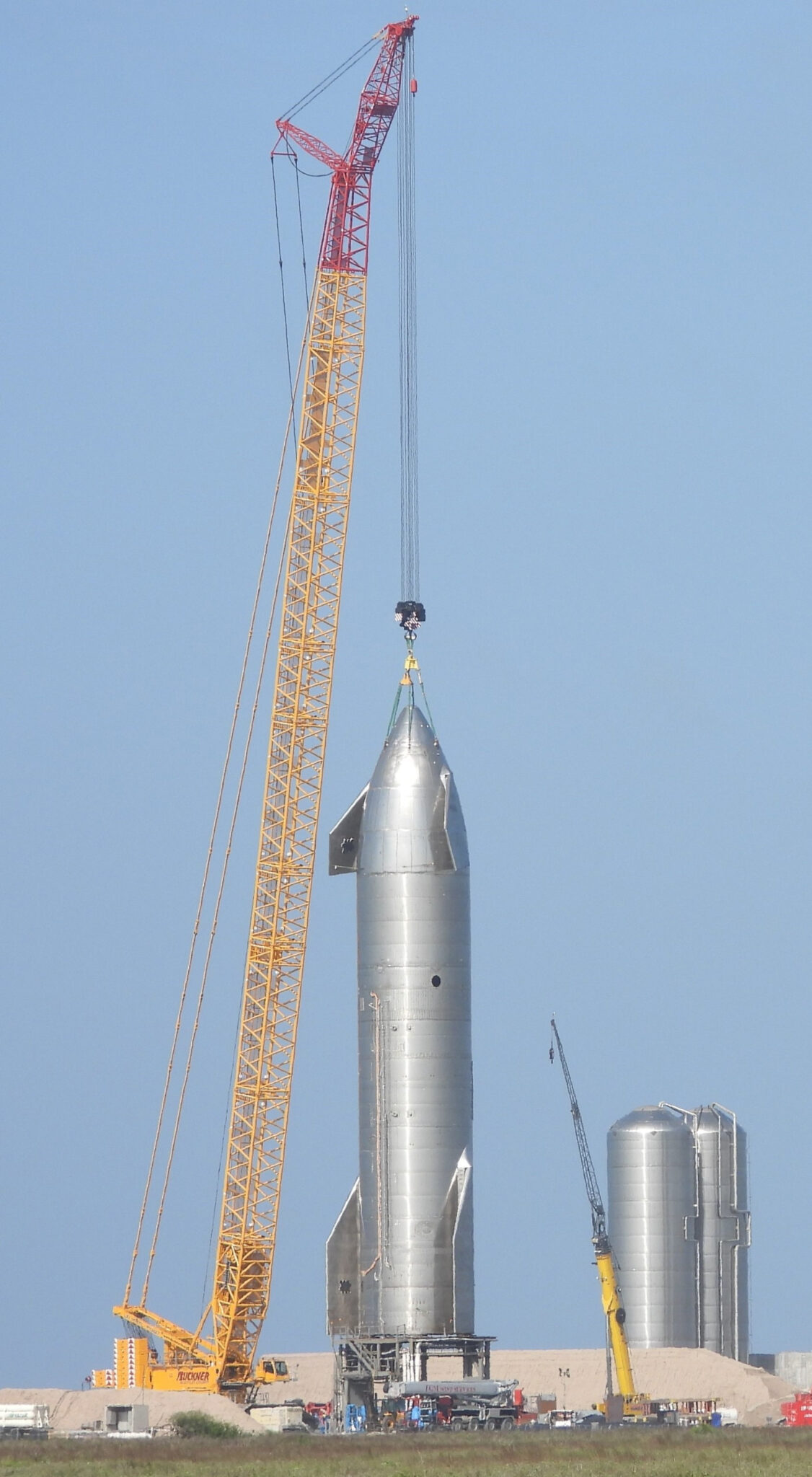 …the rockets are moved from the final assembly hangar over a flat track to the launch site, where they are erected on a scaffold – a perfect job for the LR 11000.

Several crawler cranes from Ehingen in Upper Swabia, Germany, are currently in action at the new Starbase in Boca Chica, Texas, USA. Buckner Heavy Lift Cranes, one of the largest crawler crane contractors in the US based in Graham, North Carolina, is using two large Liebherr cranes at the site – an LR 11000 and an LR 1600/2. They are in action on behalf of SpaceX, the private space travel company founded in 2002.

Buckner Heavy Lift Cranes contacted the engineers at the Liebherr plant in Ehingen in April 2021 with news of an exciting project. And just two months later, things have moved along nicely – an LR 11000 hoisted the final components of a Starship prototype into place at the site in Boca Chica, Texas. The new Starbase not far from the Mexican border is currently the venue for multiple take-off and landing tests being conducted by SpaceX.

An LR 11000 in the very latest configuration was erected in Boca Chica by Buckner for this prestigious project for the private American space travel company. The 1000 tonne crawler crane was erected with the main boom and the fixed F2 jib, which was specially released by Liebherr in 2019 for use in the US. With this configuration, the 1000 tonne Liebherr crane can hoist up to 253 tonnes at the jib head. This capacity was almost used to the full for erecting the rocket components. A successful high altitude test flight with the SN15 Starship prototype was reported by SpaceX on 5 May 2021, with the rocket successfully landing in the intended location after the test had been completed.

“These are impressive images for us to see, with our crawler cranes at the heart of private American space travel. And the statics and calculations for this job were also a real highlight for us, it is not every day that something like this arrives on our screens”, says Jens Könneker, Product Manager Lattice Boom Cranes at Liebherr. “We have had a close working relationship based on trust with Buckner for many years. The fact that we are the supplier of choice for a project like this is a sign of great appreciation and trust – and it was something very special for us”, adds Florian Ritzler, Sales Manager Lattice Boom Cranes for the USA.

Work started on the construction of the Starbase in Boca Chica in 2014. Shortly after this it was decided that the production of the reusable Starship rockets would also be relocated to Boca Chica. Today, well over 500 people are working on the site in the production plant, the control centre and around the launch pads. An LR 11350 is also in action there – this 1350 tonne crane, currently the second largest crawler crane in the Liebherr portfolio, is providing support with the construction of foundations and the infrastructure for the production plant and launch site for the rockets.

The launch site is just a few hundred metres from the sea. In contrast to the other launch sites used by SpaceX in the USA, this site does not have an angled ramp. Instead, the rockets are moved from the final assembly hangar over a flat track to the launch site, where they are erected on a scaffold – a perfect job for the LR 11000.