Building bridges is never an easy job. Especially if this bridge runs over busy railway tracks. ALL Crane, the largest crane rental company in the United States, relies on Liebherr cranes to place the bridge span in an ambitious time frame. The LTM 1450-8.1 and the LTM 1250-6.1 mobile cranes were the cranes of choice for this project in Cleveland, Ohio.

Maybe constructing a three-span pedestrian and bicycle bridge sounds easy enough. But what if it’s going over the third-busiest set of railroad tracks in the United States, with estimated traffic of 100 trains per day? In that case, you have to work closely with the railroad to get the critical work-clearance time you need to set spans. And it’s likely to be scheduled in extremely brief, single-hour increments. That would take a perfect combination of planning, materials, people, and cranes to get the job done.

That was the scenario as a new hiking and biking bridge was constructed in Cleveland’s Wendy Park as part of an expansion of the Ohio & Erie Canal Towpath Trail. The 100-mile path connects Cleveland to the Cuyahoga Valley National Park and cities to its south. ALL provided several pieces of equipment for the job site, including various aerials and a forklift, but the stars were the two cranes used to set bridge spans and the final arch that topped off the structure. The cranes were a 450 t capacity Liebherr LTM 1450-8.1 and a 250 t capacity Liebherr LTM 1250-6.1. Often, the units worked independently of each other in setting 38 m spans that weighed 38,5t. But, for one critical window, they came together to help set the two halves of the arch and hold them in position so Youngstown Bridge’s ironworkers could execute a mid-air splice.

Plans for the lift were submitted months in advance to Norfolk Southern Railway, owner of the tracks and ALL specified the cranes. Once the plan was submitted, no changes could be made to the lift. And, when the approved work time finally came, the team on the ground would likely have just an hour to complete the placement of the arch. That is usually the maximum amount of time a railway operator can halt train traffic for lifting work to be performed. 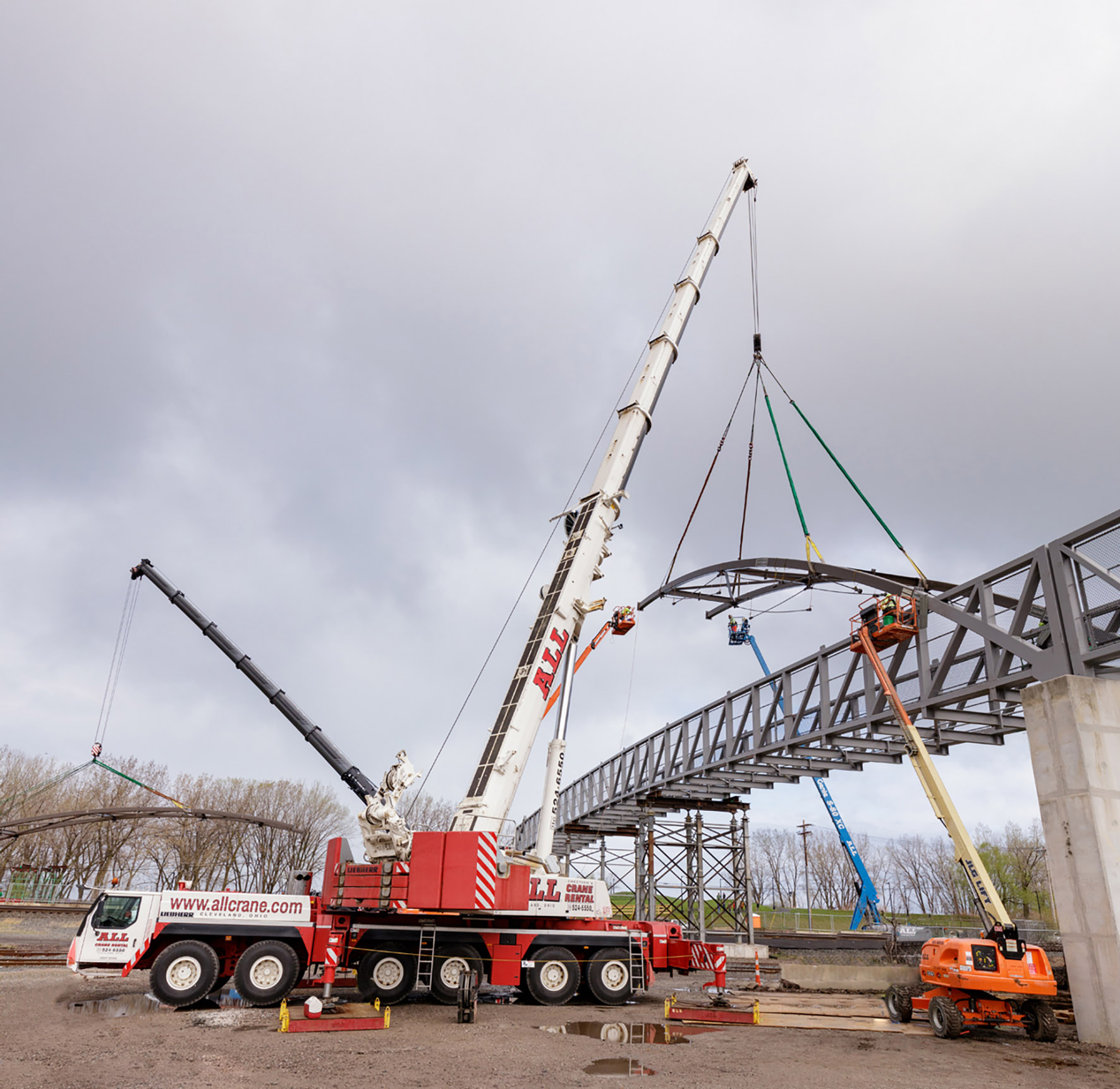 In the days leading up to lift day, Dan Lewis, project supervisor for Youngstown Bridge, had his team perform several pre-lift tests to make sure they would be ready to make the most of their time. “This gave our ironworkers the opportunity to fine-tune the rigging of each arch section, incorporating the actual crane configurations that would be used on lift day,” said Lewis. “This was important, given the time constraints. The team could know, well before the lift, that the two arches would be within a degree or two of each other at the splice point.” For these practice runs, Lewis also assigned zones on the arch to each of his ironworkers so they would know exactly where to focus their efforts and what tasks to perform during the actual splicing.

The railway window was scheduled for mid-April then was suddenly moved up by three days. Lewis praised the flexibility of ALL Crane, noting how quickly they were able, on short notice, to mobilize the 250t capacity LTM 1250-6.1 to have it assembled and ready for the lift. When the predetermined hour finally arrived to set the two arch sections, nearly eight months of planning came down to 60 minutes. The LTM 1450-8.1 was configured with 48m main boom at a 15m radius and the maximum of 134t of counterweight. The LTM 1250-6.1 had 40m of main boom at a 10m radius.

In the days preceding, both cranes had already been quite busy. The two 38 m bridge spans were set on their respective abutments and temporary structures toward the middle, as well as a 75 m center span resting on the temporary structures. By installing the arch, which would assume the bulk of structural support duties for the entire bridge, the temporary structures below could be removed, and the bridge would be essentially complete. With the clock running, crane operators held each arch piece in position as a dozen ironworkers, six in man lifts and six on the ground, swarmed the area to install scores of bolts at critical splice points. There was a minimum number of bolts that had to be installed for the structure to support its own weight, and this became a crucial milestone. It meant that, should the work window start to close, the bridge would be stable enough to stand on its own. Otherwise, if the milestone wasn’t met, ironworkers would have to reverse course and disassemble the arch so they could try again another day. Given the difficulty in scheduling work windows, no one wanted this. 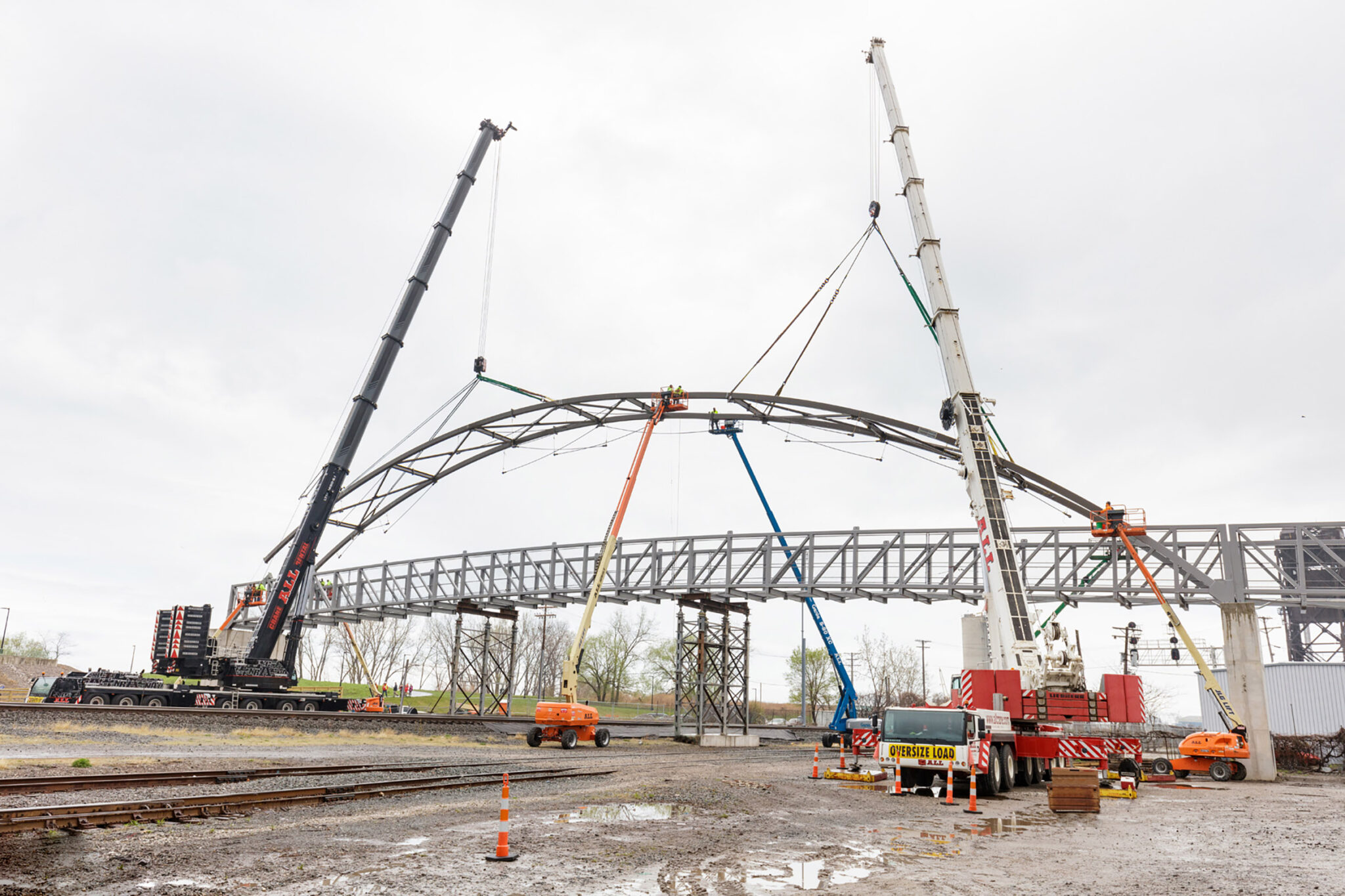 Tandem hoist to place the huge bridge span over the railroad tracks.

At the 35-minute mark, when the threshold was reached, everyone breathed a sigh of relief. Just 23 minutes later, at minute 58, the work was completed. There would be no need to schedule a second work window. The new hiking and biking bridge was now a reality.