Liebherr Cranes Erect Monument to the ‘Tailor of Ulm’ 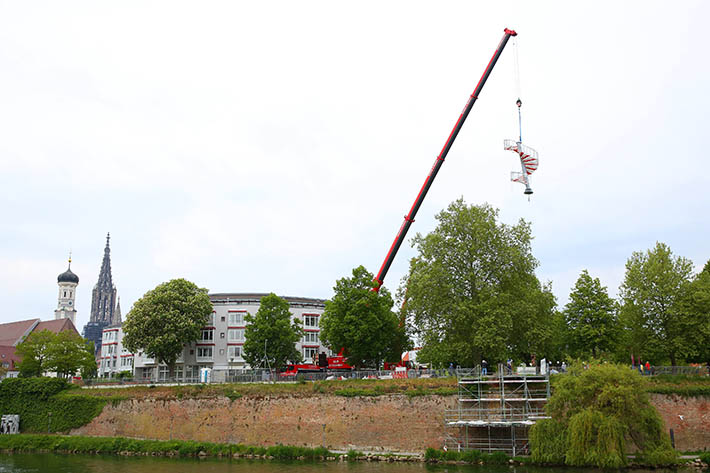 The first segment of the Berblinger Tower is swung into position. In the background on the left is Ulm Minster, which has the highest church tower in the world, measuring 162 metres.

To celebrate the 250th anniversary of his birth, a prominent monument has been erected to aviation pioneer Albrecht Ludwig Berblinger. Using two Liebherr mobile cranes, Ulm-based crane and heavy haulage contractor Rieger & Moser GmbH & Co. KG erected a walk-in spiral staircase tower, whose appearance is reminiscent of the “Tailor of Ulm’s” flying machine. The Berblinger Tower is now positioned at precisely the point from where Berblinger attempted to fly over the River Danube in 1811.

Rieger & Moser used an LTM 1060-3.1 for the initial assembly of the three main segments of the spiral staircase. The tower was then erected by an LTM 1350-6.1. For this purpose, the various segments, weighing up to 8 tonnes, had to be hoisted using a radius of up to 40 metres. In a tandem hoist with the 60 tonne crane, the tower sections were first turned in the air from a vertical into a horizontal position to prevent damaging the monument.

The tower’s dedication ceremony on 25 June coincides with the 75th anniversary of Rieger & Moser. “When we heard about the Berblinger Tower project, we immediately knew that we had to be involved. After all, we have had close links with the City of Ulm for 75 years and have contributed to its construction and development with our services”, says Managing Director Dieter Moser. 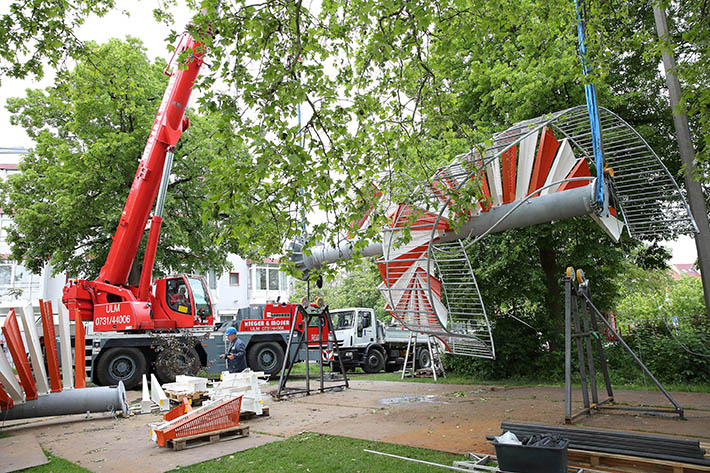 The tower segments are turned from a vertical to a horizontal position in a tandem hoist.

The Liebherr LTM 1350-6.1 mobile crane erected the final section of the new monument on the Adlerbastei on the banks of the River Danube.