Liebherr has delivered its 1000th mobile construction crane. The MK 140 Plus expands the fleet of Hanyš – Jeřábnické práce, s.r.o. the largest provider of crane services in the Czech Republic and is the first crane of its kind in the country. The crane features a number of smart design solutions such as the VarioJib concept (flexible use of trolley and luffing modes), radio remote control option and an elevating operator’s cab.

“I’m confident that the crane will bring in more orders and make our work even more efficient,” so the words of company founder and owner Rostislav Hanyš at the ceremonial handover in Radonice (Prague East), where he took receipt of the new machine from Valdemar Matuška, Managing Director of Liebherr-Stavební stroje CZ, s.r.o.. Matuška was delighted with this special delivery, “I’m sure we’ll continue working together and that this won’t be the only machine for Hanyš.” 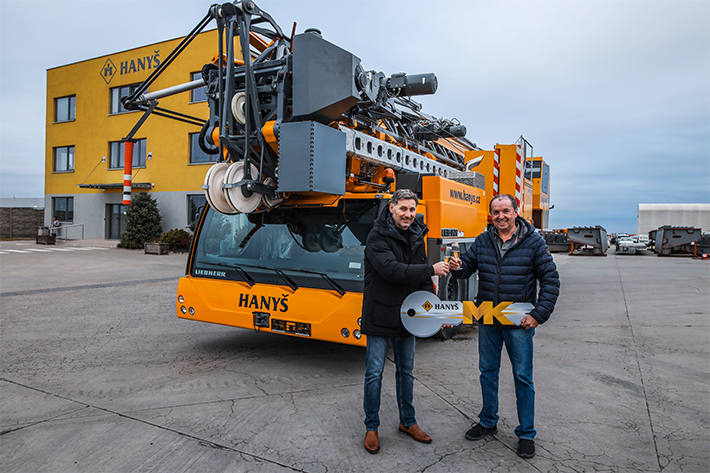 Hanyš already has a Liebherr MK 110 in successful operation. The concept and potential of the MK series won the company over, which is why a new MK 140 is now also joining the fleet. The agile five-axle crane is the most powerful MK in the series. Thanks to its vertical tower, the MK can be positioned directly at the building and therefore requires very little space. Only one person is needed for transport, assembly and operation. Several construction sites can be covered by the crane in one day. Its ecological and future-oriented hybrid power concept enables all-electric operation.

Featuring a low-positioned driver’s cab, the MK 140 weighs 60 tonnes and has a transport length of 16 metres. The crane superstructure is the only one in the MK series with a three-section telescopic tower of solid-wall construction. The VarioJib concept offers two operating options, enabling the flexible use of trolley and luffing modes. The time-tested trolley mode offers a high handling capacity for trolley operation. In luffing mode, the MK 140 moves the load through continuous jib adjustment, achieving a reach of 65 metres and a hook height of up to 94.4 metres. Additional lattice jib heads can be ordered separately, together with the ballast weight required, for even greater versatility in application.

“MK series cranes are often called upon when short-term lifting work is required and conventional mobile cranes aren’t an option because of the space they need to handle projecting edges of angular buildings,” explains Jan Hloušek, Head of Tower Cranes Customer Service at Liebherr-Stavební stroje CZ. “The crane is perfect for jobs in urban areas and work on tall structures, such as steel framed warehouses.” The Liebherr MK 140’s excellent manoeuvrability is also supported by its chassis; all five axles are controllable by a total of five steering programs. Differential locks ensure excellent off-road mobility, even in difficult conditions. 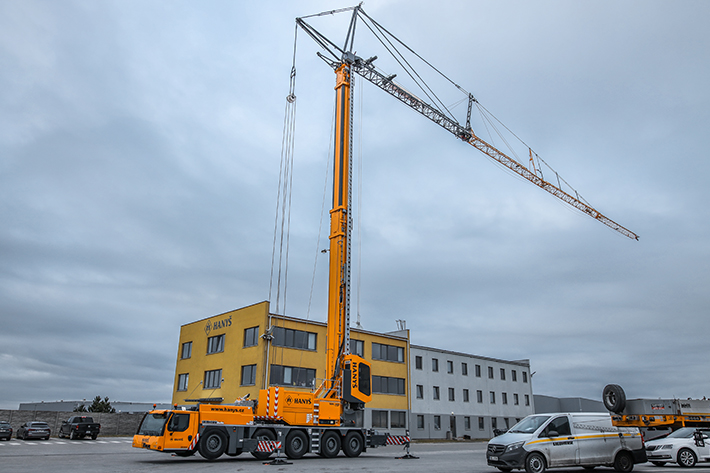 Depending on its tower height, the crane is ready to start work in just 14 to 17 minutes.

Rostislav Hanyš appreciates these advantages, “When it comes to working at heights, this crane takes up much less space than any conventional type. If we’re in a city centre, we only have to have enough space for the crane’s extended outriggers and we can reach heights of up 56 metres over buildings. It’s one of the great things about working with this crane.” Hanyš plans to primarily use the new MK for roof and air-conditioning installations and for setting up pools on roof terraces.

Smooth handling and a comfortable cabin – that’s the appeal for Pavel Dobrý, one of Hanyš’ crane operators, “The MK 140’s sensitive drives and intelligent assistance systems make operation safe and precise.” Pavel Dobrý has already tested the new crane during a training course at Liebherr’s production site in Biberach an der Riß (Germany), “It’s operated by winches instead of hydraulics – a reliable solution in my opinion.”

Liebherr supplied Hanyš’ MK 140 with all possible features, including an extra hook camera, an optional system for unique load increase (which is where the “Plus” in the crane’s name comes from), an extended jib, four ballast weights weighing 9 tonnes in total, and differential locks between both front and back axles. The elevating crane operator cab also got the full treatment with air conditioning, a drinks cooler, a heated seat and a high-resolution colour display screen. A one-week training course for crane operators at Liebherr’s production facilities was also included in the package.

Hanyš – Jeřábnické práce, s.r.o. is a privately owned Czech company based in Radonice (Prague East) that has been engaged in crane services for over 30 years. The company currently has over 90 Liebherr cranes and offers crane work, heavy-duty transport as well as operational and transport-related services.