The Liebherr 34 K crane, part of the rental fleet of Netherlands-based crane specialist Van der Spek Vianen B.V., had been commissioned to work on the tallest building in the Benelux region by customer Civiele technieken deBoer bv. A gantry crane had been used to lift the bottom-slewing crane 190m into the air, where the roof of a lifting platform was dismantled.

The unique architectural landscape of the Dutch port city of Rotterdam laid at its feet: The 34 K, one of Liebherr’s fast-erecting cranes, was in operation at one of the tallest residential towers in Europe this summer, the Zalmhaven I. The De Zalmhaven development project along the Maas in Rotterdam’s Scheepvaartkwartier district is taking shape.

Construction has been under way since November 2018 near the city’s Erasmus Bridge. De Zalmhaven has three towers in total, of which Zalmhaven I is the tallest with its height of 215m. The other two tower blocks, Zalmhaven II and III, are identical in height, measuring in at 70m.

Designed by architectural firms Dam & Partners and KAAN Architects, the project encompasses 452 apartments and penthouses, 33 town houses, a multi-storey car park, offices, commercial space, a roof garden and a restaurant with views of the Rotterdam skyline. The development is scheduled for completion in 2022.

The job at lofty heights took four weeks and was an unusual one for the 34 K.

A Liebherr 34 K fast-erecting crane with a hook height of 20m had been in place on the roof of what will eventually be the restaurant since mid-June. Its job, working at a height of 190m, was to dismantle part of the lifting platform, which had been used during the construction of Zalmhaven I.

The lifting platform extended upwards along with the tower, level by level, and was practically a moving workshop in which the engineers were able to work as they would do on the ground. Because of this concept, the Zalmhaven I site had so far managed without the use of a tower crane. But things changed with the assembly of the 34 K, which was operated via remote control.

It was the question of how the lifting platform’s roof could be dismantled without considerable repositioning that prompted this assignment with a view. The customer Civiele technieken deBoer bv was looking for a crane with a suitable reach. But how a crane could be assembled in such a confined space in the first place also had to be addressed.

The crux of the matter was that the crane needed to fit inside the lifting platform structure. Engineers used a 3D simulation ahead of time to calculate how this could best be achieved and which parameters needed adjusting and how. An extra issue was that the space between the platform base and the gantry crane was extremely tight for a crane assembly.

The longest possible reach but also as compact as possible – the solution to this challenge was a 34 K from Liebherr. Crane rental company Van der Spek Vianen B.V. recommended the fast-erecting crane to customer CT De Boer as an efficient and straightforward solution.

Measuring 3.5m in height when folded, the crane is small enough to fit into the platform structure. And with a jib length of 30m, it is large enough to be able to dismantle the roof without time-consuming relocations. With this information to hand, alternative lifting solutions were consequently discarded. The roof parts to be removed weighed between 1,200 and 1,500kgs.

Although the experts were faced with a logistical challenge regarding assembly, this did in fact go smoothly thanks to extensive preparation. First of all, the gantry crane, which is a part of the lifting platform system, lifted ballast weighing more than 17t. This was followed by the 34 K, weighing in at 15t. The gantry crane is capable of lifting up to 23t at a time.

The following day, the ballast was mounted and the crane unfolded itself above the rooftops of the Dutch port city. In contrast to a top-slewing crane, the fast-erecting crane assembles and disassembles itself without additional aid. It was positioned where the platform is open at the top so that the crane, including the jib, could protrude above the roof. Its dimensions mean the crane fitted perfectly through the gap in the roof of the structure. When the assignment was completed in mid-July, the gantry crane returned the 34 K to the ground.

Once again, the K series impressed with its adaptability and flexibility. Designed primarily for projects such as the construction of single-family homes and apartment buildings as well as for industrial projects of various sizes, the 34 K found itself working on the tallest skyscraper in the Netherlands; an assignment that had its own particular appeal due to the extraordinary height involved. 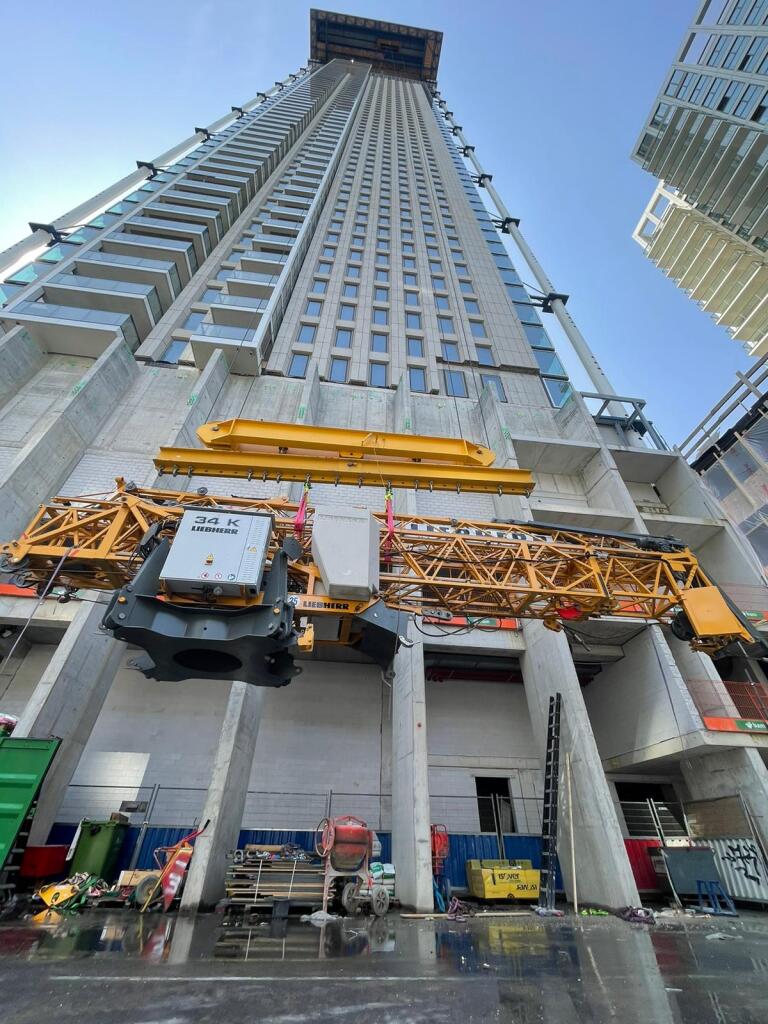 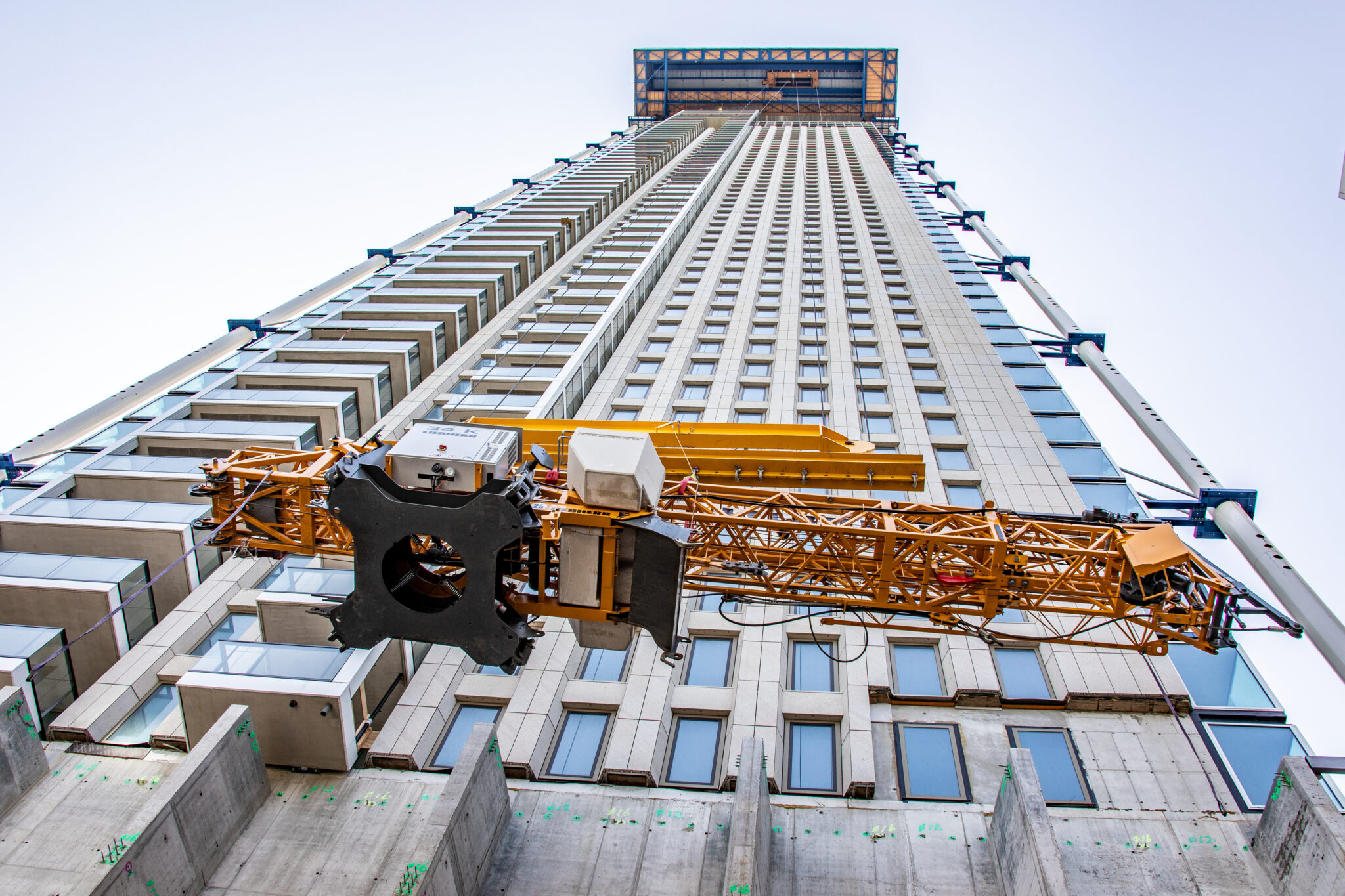 A gantry crane lifted the 34 K to a height of 190 metres for assembly at the top of a skyscraper. 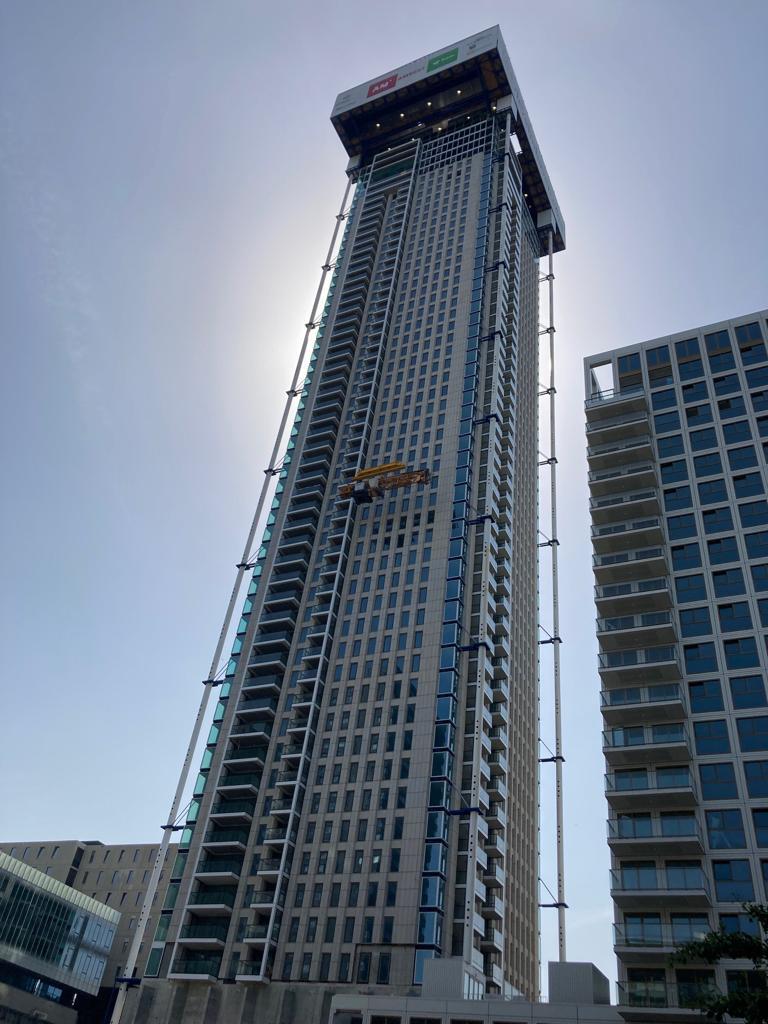 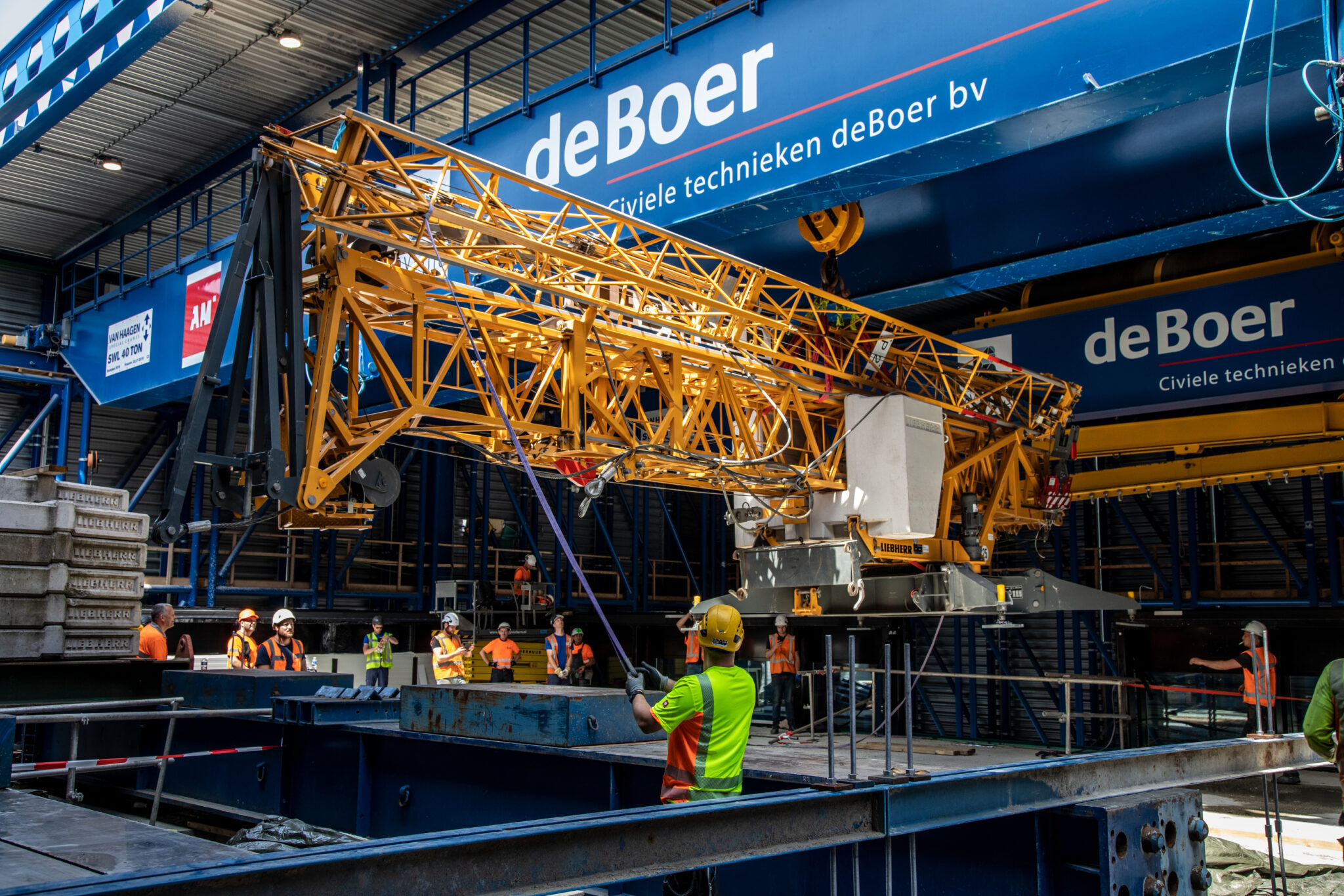 Tight conditions: The dimensions of the 34 K made it fit snugly between the roof and the base of the lifting platform structure.

Above the rooftops of Rotterdam: A Liebherr 34 K fast-erecting crane removed the roof of a lifting platform structure on the tallest building in the Benelux region. Rotterdam’s Erasmusbrug (Erasmus Bridge) over the Maas is on the left of the photograph.