On Tuesday, 28 April, Fagioli announced the end of one of the most demanding lift operations ever performed. After taking part in the demolition of the old Morandi bridge, Fagioli is proud to have also been involved in the installation of the main sections of the new Genoa bridge. The operation was successfully concluded with representatives of the main Italian political authorities looking on.

PERGENOVA S.C.p.A. is the listed consortium company established by Fincantieri and Salini Impregilo, to design and build the Polcevera viaduct on Italy’s A10 motorway.

On Sunday, the third and last maxi-span, between Pier 10 and Pier 11, which measures 94 meters for 1,800 tonnes of weight, was raised, and with the pile segments already assembled in recent days it has reached a 100-meter length. The bridge finally overpasses the railway again, reaching a 750-meter length, about 80% of the total.

The preparatory operations for the raising began on Saturday: it was necessary to have the span pass over the railway with the aid of remote-controlled bogies. after a 90-degree rotation manoeuvre, it was brought into position between the Piers.

Once again, the strand jacks, able to support the weight of the maxi-span, on which 14 side casings, the predalles (i.e., the slabs used for the concrete casting), the veils and also the installations have been already assembled, were brought back into the field for the raising. These special hydraulic jacks are able to guarantee a safe raising of the element at a speed of 5 meters per hour, in optimal weather conditions. The raising operation lasted a total of 8 hours and was completed on Sunday evening. 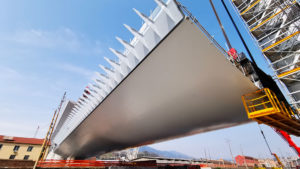 On the ground, the assembly of the Spans 1-2 and 2-3 is proceeding. The welding operations of the joints of the maxi-span on the Polcevera between Pier 9 and Pier 10 have been completed another essential operation in order to proceed with yesterday’s raising.

At altitude, on the other hand, the assembly of the side casings, the veils and the predalles is proceeding, as well as the welding of the joints and the installation of the systems of the 4 decks between Piers 13 and Piers 17. The span that will be positioned between Pier 18 and Shoulder B has been completed.

Fagioli on 245t Transport in Modena

New Polcevera Bridge in Genova Gets a lift from Fagioli

Largest project ever in port of Marghera