KNM Helge Ingstad to be Scrapped

The Norwegian Ministry of Defence has recently announced that the KNM Helge Ingstad should be scrapped as it would be too expensive to repair the vessel.

This follows 4 months of news reports on HeavyLiftNews.com from the collision between the Norwegian Navy Frigate and the oil tanker, Sola TS, in November last year until the completion of the salvage operation in March this year. The lifting operation was carried out by the Scaldis Crane Vessels, Gulliver and Rambiz for the main Norwegian contractor BOA Offshore.

The study on the repair revealed that repairs could cost up to NOK 14 billion compared to an estimated NOK 1 billion for a new built frigate.

The news brings the 9 month old Nordic Saga to an end. 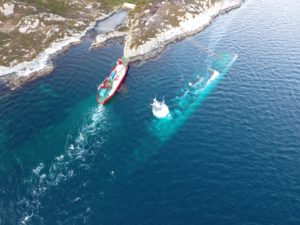 The Frigate slipped into deeper waters soon after the collision 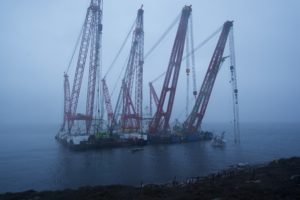 Cranes Vessels Gulliver and Rambiz preparing for the lift. 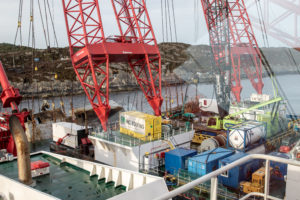 All Photographs courtesy of the Norwegian Ministry of Defence

Featured Titled photograph Helge Ingstad with temporary repairs and on her way to the drydock. Photographer Emil Wenaas Larsen

After a week of bad weather the Rambiz has returned to the salvage site where diving operations have restarted and will so reamin as long as the weather allows.

The bad weather has halted the salvage operation work on the KNM "Helge Ingstad".