With greater availability and a high level of safety and user-friendliness: the model-maintained KAMAG industrial heavy transporter (IHT) has set new standards in many aspects. The vehicle benefits in particular from the new cab and the maintenance-friendly engine installation.

When semi-finished steel products such as sheets, slabs, coils and beams or scrap pallets and buckets have to be transported, this is when the KAMAG industrial heavy transporter (IHT) really comes into its own. These special vehicles are extremely versatile and robust workhorses for transport tasks in industrial companies and defy even the toughest environmental conditions that are commonplace in steelworks. Safety and reliability are paramount with these vehicles. But economy and functionality also play an important role here. During the redesign of the KAMAG IHT, KAMAG Transporttechnik, a subsidiary of the Heilbronn-based Transporter Industry International Group (TII Group), further optimised and enhanced these features.

The upgraded KAMAG IHT is easily recognisable by the modern design of the platform driver’s cab. Generously-sized glazed areas allow a wide direct field of vision around the vehicle. The windscreen is tilted more than was previously the case in order to prevent distracting reflections. At the same time, the tilt of the glass prevents accumulation of dirt.
The driver now reaches his workplace using a stair-like access point. This construction is safer and more comfortable than access ladders. The Ulm-based manufacturer of special vehicles has also made the workplace more ergonomic than before. The operator controls all central vehicle functions via a joystick control system. The main display is connected to the rotatable driver’s seat and swivels when the operator rotates the seat 180 degrees; for example, when reversing out of a production hall. Furthermore, the cab also features a state-of-the-art training seat. 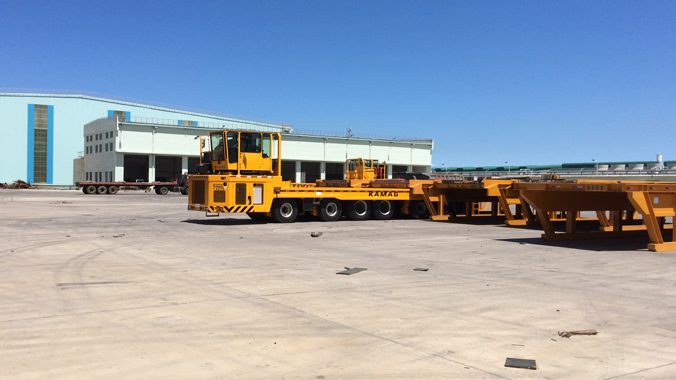 The experience gained from the operation of the IHT models from KAMAG as well as from SCHEUERLE, also a subsidiary of the TII Group, flowed into the facelift. This has not only improved the handling along with the operating costs of the vehicles. The wide range of configuration possibilities are also geared towards fully meeting the needs of customers. Users have the option of precisely configuring their KAMAG IHT for the respective application. In addition, the stronger standardisation of the components and assemblies has resulted in several tangible advantages. This makes it easier to procure spare parts and ensures shorter delivery times.

Kübler Drive through Central Munich – with a 215t Gas Turbine