The Jan de Nul Group with activities mainly in dredging related sectors but also including Heavy Lift and Salvage work has published results for 2018 during which the market conditions remained quite challenging, as in 2017. The key figures show:

In early April 2019, (HLN link here) Jan De Nul Group ordered a large offshore jack-up installation vessel with the shipyard COSCO Shipping Heavy Industry in China. This jack-up vessel will be equipped with a main crane of over 3,000 tonnes (HLN link here) and will be able to work in water depths of over 80 metres. As such, the ship will be able to install the new generation of very large offshore wind turbines. The vessel, to be named Voltaire, is set to be delivered in 2022.

Their two other wind turbine installation vessels (WTIV) Vole au Vent, built in 2013, and Taillevent, ex MPI Discovery, built in 2011 and acquired from the Vroon Group in July last year, make up the remainder of the heavy lift fleet. 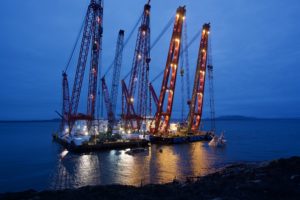 The Rambiz and Gulliver engaged on the Helge Ingstad Salvage Operation   Marine salvage of the Norwegian frigate Helge Ingstad. Photograph courtesy of the Royal Norwegian Navy

KNM Helge Ingstad to be Scrapped