The power of determination

The most powerful crane Liebherr has ever developed, the HLC 295000, has now begun its service on the special ship “Orion”. Its goal: to contribute to the energy transition. The offshore crane will fulfil its intended purpose thanks to a real tour de force of technical know-how and human determination. For shortly after the crane had been successfully installed on the ship, a devastating setback occurred.

The beginning of a new era: the HLC 295000 embodies the next generation of Liebherr offshore cranes. Manufactured at one of our German sites, in the Hanseatic city of Rostock (Germany), it was installed on the special ship “Orion” of the Belgian DEME Group in Rostock harbour. Numerous teams from a wide range of departments worked on this pioneering project for years. This is undoubtably a milestone in the relatively short company history of Liebherr-MCCtec Rostock GmbH. The entire workforce at the site watched the HLC 295000 grow over a period of months. As it grew, so did their pride in this unique product.

The crane is primarily used to install the increasingly large offshore wind turbines that will make a significant contribution to the energy transition. At the same time, the energy transition is also the driving force behind a rise in the dismantling of disused offshore oil and gas production facilities, where the HLC 295000 helps dismantle large and heavy parts offshore. Looking ahead to the future today is one of Liebherr’s basic principles. The HLC 295000 is a vital tool for ensuring sustainable energy provision for present and future generations.

“The HLC 295000 is an important tool to realise the development of sustainable energy supply for present and future generations.”

It was the 2nd of May 2020 – a date that will stick in the minds of the entire workforce at Liebherr-MCCtec Rostock GmbH for years to come. The last finishing touches to the assembly work had been completed. The HLC 295000 had been installed, and the Orion was ready for use. Before the ship embarked on its first journey however, the crane and ship were tested in Rostock harbour, as per regulations. In principle, this is a standard procedure in the industry. But then something happened that no one could have expected. During the last overload test, which involved hoisting a 5,500-tonne load, one of the purchased parts on the crane failed: the hook. It broke under a load of 2,600 tonnes. A hail of steel rained down. The noise was deafening. The load snapped off, triggering a disastrous chain reaction in which two people were injured and the crane suffered severe damage. It was an incident that shook the entire Liebherr plant to its core.

“It still sends shivers down my spine whenever I see pictures of it. At first we simply couldn’t believe it,” recalls Frank Busse, Technical Advisor in Customer Service for Offshore Cranes, who had been monitoring the installation of the crane from the very beginning. “My first sensation was a feeling of helplessness. On that day, we saw the work of years literally come crashing down. At the same time, all the other prior tests had shown us that the crane was working. The only ray of hope at that moment: Thanks to the stringent safety precautions, nobody was seriously injured.

A new optimism sweeps through Rostock

“Despite the difficult circumstances, we did not hide our heads in the sand, but instead rolled up our sleeves and got down to work.”

The damage was huge. The flagship project was, to a great extent, destroyed. Components into which so much experience, sweat and lifeblood had been poured became unusable within seconds. Everyone involved was stunned. But the silence that fell over the entire Liebherr plant after the incident increasingly gave way to a new optimism that soon made itself felt everywhere. Without too much hesitation, solutions were sought for the challenges that now lay ahead. There was a sense of new beginnings in the air. Following a close dialogue with all the parties involved, the decision was made: The HLC 295000 was to be rebuilt. It was a sign of partnership and strong cohesion. Living values – especially in times of crisis. 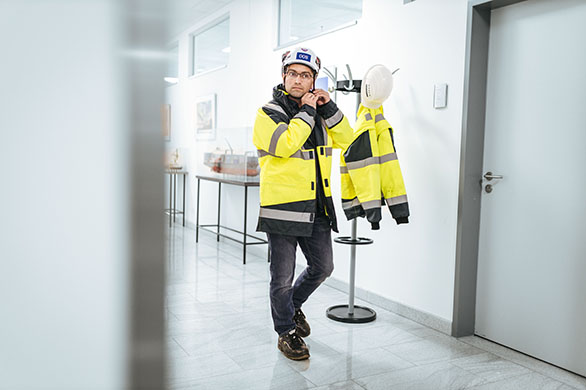 When Frank Busse heard that the crane was to be salvaged and rebuilt, he rushed to the scene immediately. “It was a very memorable day for me. We were going to rebuild our crane!” he recalls. “You could immediately feel a surge of energy sweep throughout the entire team. Despite the difficult circumstances, we did not hide our heads in the sand, but instead rolled up our sleeves and got down to work. This is precisely why I work for Liebherr,” says Busse.

Shortly afterwards, Frank Busse was appointed to the coordination team due to his experience in projects and assembly. He and his colleagues set about planning and implementing the salvage and reconstruction work. There was no blueprint for salvaging the crane; it had suffered enormous damage. “The situation was unclear. At first, we had only a rough idea of what was in store for us,” says Busse. “But that only made us more determined. For me, this goes hand in hand with an almost competitive sense of ambition that calls for passion and an equally enthusiastic team. All of this came together for the HLC 295000.”

During the salvage and dismantling operations, says Busse, his team was able to rely on cross-sector expertise and a wide range of highly specialised Liebherr machinery. “Our technical partners and suppliers all pitched in as well,” says Frank Busse. “We also had support from international experts who helped us salvage the crane. We definitely had the crème de la crème working together in Rostock.”

After dismantling, the entire crane was comprehensively inspected. A new boom and parts of the A-frame had to be made from scratch. All the main components were meticulously examined. “We wanted to know down to the smallest detail what had happened when the accident occurred and what effect it had on every single component of our crane,” Busse explains. “This was elementary if we were to be able to hand over a rebuilt crane on par with a newly manufactured piece of equipment.” 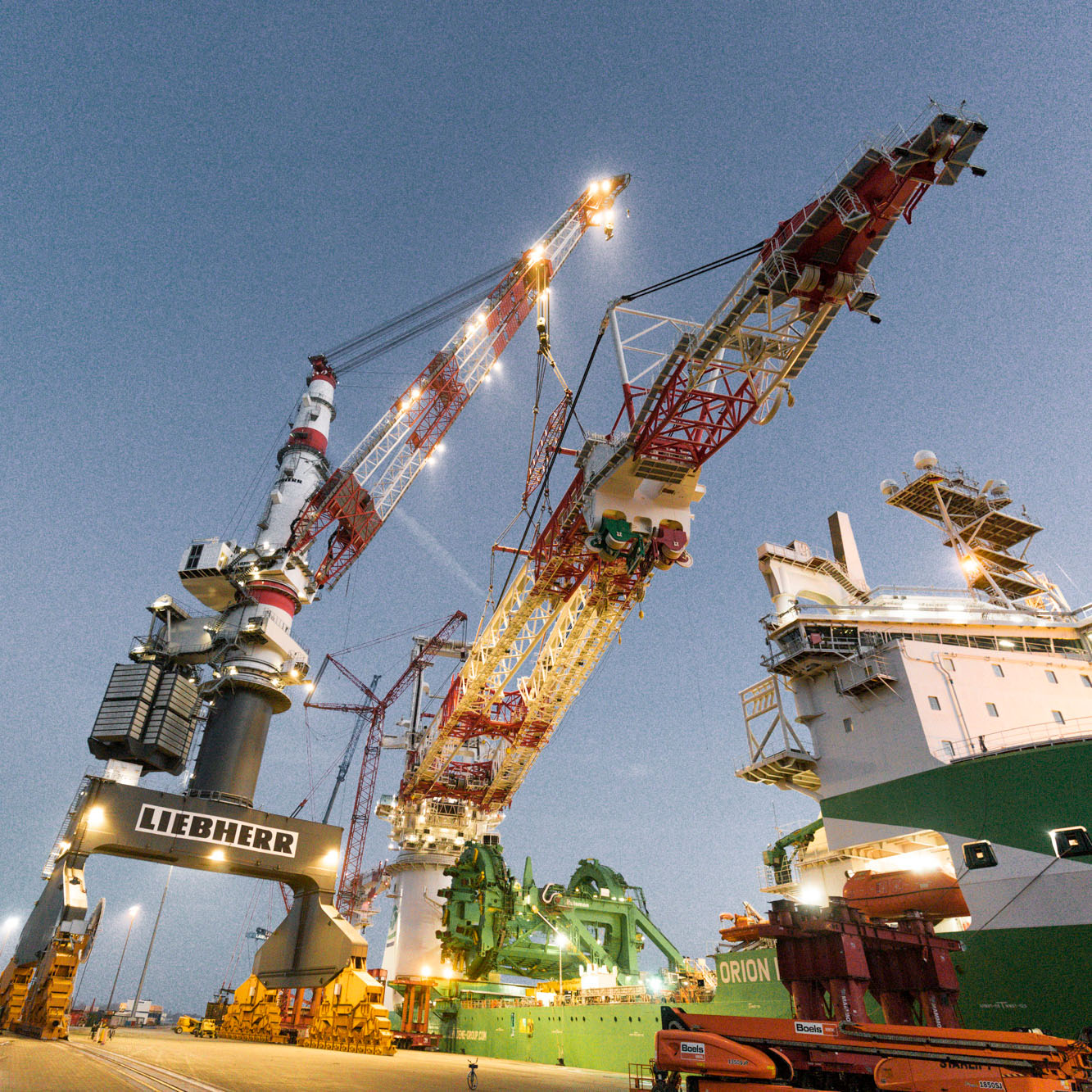 The boom is replaced

In August 2021, the newly repaired Orion returned to the Rostock overseas port. When Frank Busse saw the bright green ship on the quayside at the start of his shift, his heart beat a little faster. “Now more than ever,” said the 36-year-old happily. The repaired crane was parked in the Rostock workshops where it awaited installation. Everything was ready.

“First we installed the revolving platform on the ship, then we mounted the A-frame and, in one last big hoist, we assembled the new boom,” says Busse.

As important and challenging as the installation of the large components was, however, the assembly and commissioning of the hydraulics, electrics and software that went on in the background were equally important. Attaching the rope was especially exciting for the team. It involved reeling in a steel cable: 3.1 kilometres long, and as thick as a sturdy sailor’s arm. “It’s absolutely fascinating every time,” says Busse.

Time to set off

The work was completed in March 2022. The team began putting the crane into operation. Everyone was unusually tense just before the overload test. This was the moment that the accident had happened many months ago. Everyone focussed on lifting the 5,500 tonnes. This time, the hook withstood the strain. “We expected nothing less. But with this kind of back story, one does feel a certain sense of relief,” admits Frank Busse after the last load test.

The Orion has a new shine to it with the HLC 295000 heavy-duty crane – clearly visible from afar – on board. “It’s finished. Amazing,” is the first thought that comes into Busse’s mind. And by that he doesn’t just mean the HLC 295000, but also the journey that brought him and his team to this goal.

His gaze drifts across the calm waters of Rostock’s overseas harbour. Time for Frank Busse to take stock: “I’ve been with Liebherr for 15 years now. Hopefully, this kind of incident will remain a one-off. What a challenge. Once again we have seen that unforeseen events can always happen. They can set us back. But the important thing is always how we deal with these setbacks,” he sums up as the Orion – and with it the most powerful Liebherr crane – finally embarks on its first assignment.